If you think the same, join us
Workplace diversity & equality

Black representation at top of FTSE 100 companies falls to zero

The number of black people at the top of Britain’s biggest listed companies has fallen to zero, despite public commitments to increase diversity in leadership.

Research by Green Park, a recruitment and diversity consultancy, shows that no black chairs, chief executives or chief financial officers remain at any FTSE 100 company, following a change of leadership at the packaging group Mondi and the exit from the index of the cruise operator Carnival.

This means that despite a small increase in the numbers from other ethnic minority groups in these top positions, there has been no progress overall in ethnic minority representation since the consultancy began compiling numbers six years ago. Just 10 out of 297 leaders in the top three roles had ethnic minority backgrounds, the same proportion as in 2014.

Trevor Phillips, the former head of the commission for Racial Equality and Green Park’s chair, said: “It is time that shareholders, consumers and employees start questioning whether Black Lives Matter is just rhetoric.

“A lot of business leaders in the last nine months have been telling us they care. We need to stop hearing how much people care and how appalled they are . . . and hear a lot more at the next AGM about what they are going to do.”

Green Park’s report also showed that Britain’s biggest companies are unlikely to hit a government-backed target of employing at least one director from an ethnic minority by 2021.

This target was set in 2016, in a review led by John Parker, former chairman of mining company Anglo American, who also recommended that FTSE 100 companies should publish their board’s policy and progress on increasing ethnic diversity in their annual report.

The percentage of black executive and non-executive directors on FTSE 100 companies’ boards and executive committees has fallen since 2014, although there has been an increase in the percentage of board members with other ethnic minority backgrounds, according to Green Park. 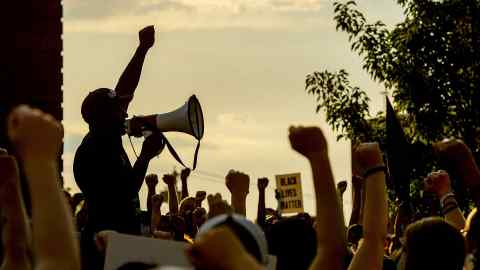 More worrying is a drop in ethnic minority representation in the leadership pipeline — defined as the 40 senior leaders who report into the top 20 on company boards. Fewer than one in 10 of these future leaders now comes from an ethnic minority background, Green Park’s figures show, with black representation declining from 1.4 per cent to 0.9 per cent in the last year.

Mr Phillips said one reason for this was that talented, mid-career people from ethnic minority backgrounds were “looking up at the top 300 and concluding, based on the evidence, that I’m never going to be one of those people”.

Companies that wanted to make real improvements in diversity at the top would need to convince candidates that they would not be “recruited as ‘diversity window-dressing’ but excluded from key decisions”, Green Park said in its report.