Tax-Free Childcare could save thousands — but it’s not childsplay

In a hurry to get somewhere? Whatever you do, don’t ask a parent about their childcare arrangements. You’ll be stuck for hours hearing about the various hoops they have had to jump through to get the nanny they wanted, their choice of nursery, or to persuade a kind-hearted family member to help out. Make the mistake of asking how they fund this childcare, and you’d better cancel any plans for the rest of the day.

I know this all too well. Childcare is both complex, and expensive. I work part-time, and have to juggle a combination of childminder, nursery, grandparents and a husband who works erratic hours to keep my two pre-school children physically and emotionally cared for.

The hardest thing about being a working parent is not how much you miss your children, or even how lousy you seem to feel (there is always a bug going around). It is wading through the administrative swamp to find and fund their care.

And it’s a huge investment. The Institute of Economic Affairs says many families spend one-third of their net income on childcare, putting it on a scale with mortgage payments. This is partly because UK childcare costs are among the most expensive in the world, with families spending an average £11,000 a year on a single full-time nursery space for under-twos, according to the Family and Childcare Trust. (In inner London the average cost of a full-time nursery place jumps to more than £15,000).

The first few years of parenthood consist largely of sleep-deprived nights and worry-filled days, so let me try to unravel the tangled web of childcare support.

In this month’s Budget, chancellor Philip Hammond flagged up the government’s new tax-free childcare scheme — the successor to the voucher system used by 750,000 families to help cover the cost of nurseries, registered childminders and nannies. The headline figures sounded promising — £2,000 per child under 12 per year — but the details have been sketchy.

But this week, HM Revenue & Customs unveiled a new website — Childcare Choices — designed to make it easier for parents to find out what support they are eligible for, and to compare their options.

You can use it to register for Tax-Free Childcare, which will begin rolling out at the end of April to parents of the youngest children, then be gradually extended over the course of the year. For every 80p parents put into a special account with NS&I, the government will add 20p up to a total of £8,000 (saved by the parents) per child. So that’s potentially £2,000 from the taxpayer — to be used solely for childcare of course.

There’s a catch. You can only get this if you and your partner work more than 16 hours a week and neither of you earns over £100,000 a year (if you each earned £99,999 a year, you’d still be eligible). Unlike childcare vouchers, this scheme is not administered via an employer — so good news for the self-employed.

Personal Finance
Are we eligible to claim childcare vouchers? 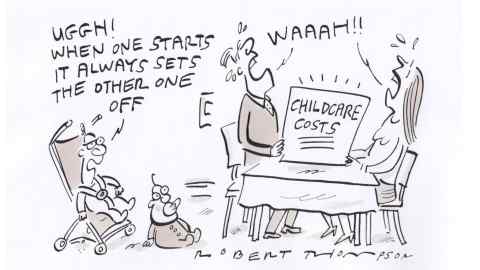 The government’s existing Childcare Voucher scheme can save parents with children aged up to 15 around £1,000 a year on childcare. This works on the principle of salary sacrifice (you pay for vouchers out of your pre-tax income). For example, a higher-rate taxpayer can take vouchers worth up to £28 a week free of tax and NI, giving an annual saving of £623.

Vouchers have to be obtained via your employer and saved via a registered provider such as Care-4, Kiddivouchers or Childcare Vouchers. The scheme is open to new joiners until April 2018. So long as your employer continues to offer the scheme you can still use the vouchers after this date (the tax breaks will also continue).

However, you can’t claim for both Childcare Vouchers and Tax-Free Childcare. So which scheme is best for your family?

Firstly, figure out if you are eligible for either. With Childcare Vouchers your employer has to offer the facility (some don’t). If they do, and you are a couple, it doesn’t matter if only one of you works.

To get Tax-Free Childcare, however, both parents have to be working.

But that isn’t all. You can use Tax-Free Childcare with other “free” schemes. Currently, all parents of three and four-year-olds are entitled to 15 hours a week of free childcare, for at least 38 weeks a year. This must be spread over at least three days, and applies only to school term time. You might be able to extend it over the entire year, and get 11 hours free each week, but annoyingly, not all nurseries will offer this.

From September, many working parents with children aged three and four will have their free childcare entitlement doubled to 30 hours a week. To qualify, parents need to be in work and earning at least £120 a week, but no more than £100,000 a year. For couples, this applies to both parents, so a couple each earning £99,999 would still get the extended 30-hour allowance. If one parent doesn’t work, your child would only get 15 free nursery hours. But beware — care outside of term time is not covered.

Play around with the online calculators within the Childare Choices website to work out how much you could be entitled to under these new schemes. I can’t promise it’s child’s play — but it could save you thousands.

Get alerts on Childcare when a new story is published