Lead the way with 50% off
Chinese equities

Chinese stocks turn from leader to laggard on tighter liquidity

Sign up to myFT Daily Digest to be the first to know about Chinese equities news.

China’s stock market has gone from global leader to laggard in the first three months of 2021, as expectations of tighter monetary policy spurred by an economic recovery from Covid-19 sap appetite for shares.

The CSI 300 index of Shanghai- and Shenzhen-listed stocks has dropped more than 5 per cent since new year, in contrast with a rally in the US where shares have touched new highs. The S&P 500 is up about 4 per cent this year, while London’s FTSE 100 has climbed 3 per cent.

For China, the performance marks a reversal from 2020 when the CSI 300 jumped 27 per cent, making it one of the world’s best-performing big markets.

Strategists and traders say Chinese stocks could also struggle in the second quarter, as policymakers seek to rein in risky lending and the economic recovery from coronavirus accelerates elsewhere in the world.

“We can expect [China’s] equity returns to be much more modest in the coming quarters,” said Frank Benzimra, head of Asia equity strategy at Société Générale.

Benzimra said Beijing’s focus had shifted to normalising monetary policy after cutting interest rates during the health crisis, which could sap liquidity from markets in Shanghai and Shenzhen. Regulators’ recent crackdown on fintech and ecommerce companies such as Jack Ma’s Ant Group and Alibaba had also weighed on investor sentiment, he added.

“It’s quite clear they do want to rein in some of the credit growth we saw last year,” said Tai Hui, chief Asia market strategist at JPMorgan Asset Management. He added that policy signals at the recent National People’s Congress, the annual meeting of China’s rubber-stamp parliament, have given some investors a dour outlook on the market. For example, some analysts viewed the 6 per cent economic growth target for 2021 as disappointing.

“We’re pretty much back to [normal] trend growth in China, whereas the US and Europe are just starting their recoveries,” Hui added.

Enthusiasm for Chinese stocks last year, as the economy recaptured its pre-coronavirus growth levels, also means that valuations have risen to levels that some investors now believe are too rich. The price/earnings ratio, a prominent valuation metric, of the CSI 300 is now 19 times versus just 12 a year ago. 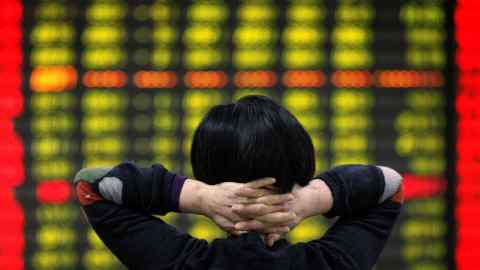 One area where Chinese markets have continued to boom this year is initial public offerings.

“There hasn’t really been a pullback in issuance,” said Aaron Arth, head of the financing group at Goldman Sachs in Asia. “More than ever Chinese issuers are exploring all their options.”

That has benefited Hong Kong, where new listings this year have raised $16.4bn compared with just $1.8bn in the first quarter of 2020, according to research provider Dealogic. Chinese internet group Baidu debuted in the city this week after raising $2.6bn.

“Even with the tightening of purse strings [in China] . . . abundant global liquidity makes the cost of capital incredibly inexpensive,” Arth added. “The outlook for Q2 looks to be simply more of the same.”