International clients turned to UK-based remote workers in the pandemic, driving a boom in exports of skilled services

Exports of services by consulting firms doubled in 2021, according to the Management Consulting Association, the trade body that oversees the sector. About 29 per cent of fee income was generated overseas, rising from 16 per cent in the year before.

One of the key reasons for this growth, according to executives across the sector, has been an unexpected boost in exports of skilled services caused by the pandemic.

As more employees were forced to work from home under government mandated lockdowns around the world, international companies found that projects could often be served as well remotely from the UK as in their own domestic markets.

Meanwhile, UK-based consultants also say they were able to work remotely as effectively as before.

“Clients have seen the results being delivered, and major transformations happening without the need for prolonged periods of face to face contact,” says Tamzen Isacsson, chief executive of the MCA. “The whole way that we have approached exporting has shifted quite fundamentally.”

Lisa Fernihough, head of financial services consulting at KPMG, says work was initially spurred by the ability for better equipped UK-based firms to provide services remotely in the early stages of the pandemic.

Many clients were also supporting government Covid aid projects, says Fernihough, which led to more work being passed on to UK consulting firms with specialist expertise.

“They didn’t have enough employees or people who could do the work that needed to be done and they reached out to consulting firms,” she explains. “So it was just sheer capability and capacity of people who could get things done.

“What’s morphed from that is the increased demand from clients overall,” Fernihough adds, noting that companies have been seeking support for large restructurings and the introduction of digital systems.

Paul Terrington, head of consulting for UK and Emea at PwC, agrees that the income for his firm’s London office was boosted by overseas clients, using its services for complex, digital-led projects spanning many countries.

Larger UK consulting firms generated a substantially higher proportion of work from overseas clients than from domestic businesses, which bosses argue showed the benefits of a multi-jurisdictional approach — even if the fee income was awarded to offices in London.

The pandemic, and the resulting constraints on travel, also caused a rethink of how overseas clients interact with consultants.

The sector had been “heavily based on business travel”, according to Isacsson but, since Covid, work with clients has been “completely reimagined”.

That level of business travel is unlikely to return, suggests Fernihough, now that “our clients have tasted something better; they can get more ready access to the best person for the job that they need without having to have delays”.

Business travel almost disappeared in 2020 for PwC’s consultants, says Terrington. Client-led trips picked up again in 2021, though not to the same level. Even so, he predicts a fundamental change in how PwC will work in future, with less need for overseas trips for project work that can be done in the UK.

The MCA says firms secured more work from clients globally, with demand particularly high in the US, Canada, Australia and South Africa. Other overseas markets that UK firms had in common were the UAE, China, Japan and Singapore.

While the proportion of fee income coming from the EU has remained reasonably stable, the percentage from the rest of the world has risen from 8 per cent in 2020 to 23 per cent in 2021.

Isacsson says it is difficult to judge whether Brexit — and the restrictions on working with some EU clients or travelling around the region — will still have an impact on the sector, as Covid travel restrictions have been the main barrier, so far. “That’s still to come,” she says.

Ben Barry, director and co-founder of IT consultancy Coeus, says Brexit had led the firm to accelerate plans to open an office in Düsseldorf to serve its clients. But, since the pandemic, the “visa challenge” is no longer an issue for the firm’s UK-based consultants, who had once expected to travel for a few days a week.

The Düsseldorf office is now often supported by the London team, working from the UK, rather than travelling to the EU. “The days of travelling to a client project for three or four days at a time are over,” Barry says.

Get alerts on Management consulting when a new story is published 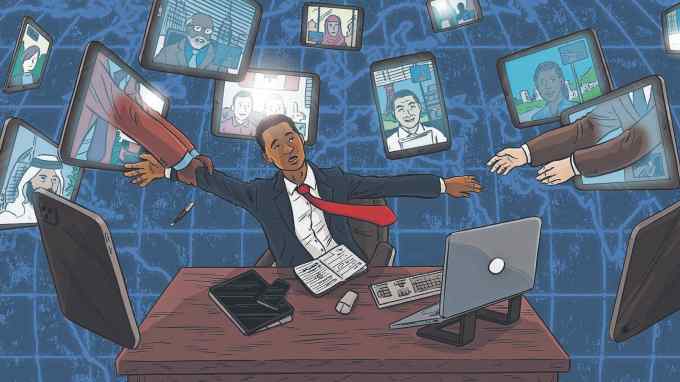