The Kudos Project: is it art, menswear or both?

Sign up to myFT Daily Digest to be the first to know about Style news.

It is unusual for Sam Lambert and Shaka Maidoh, the creative forces behind the artistic collective Art Comes First, to be separated. Typically, they work side by side on their art, menswear, and music projects – both dressed head to toe in black in a style that’s part Lenny Kravitz, part tailored polish and part London flair. But for our video call, “I’m in Paris and he’s in London,” Lambert explains. “We’re consulting here, there...” He stops and chuckles. But as he uses the pronoun “we” almost exclusively, and as Maidoh gently clarifies or adds a pertinent fact to his musings, one forgets very quickly that they are separated at all.

Since 2013, Art Comes First has been designing seasonal menswear collections in London – showing them there as well as in Paris, Florence and Milan – and developing a style signature that is rooted in classic tailoring but influenced by the duo’s photography and design projects – their artworks are used for fabrics, and their photography is often overlaid on garments. It is a unique voice that has not gone unnoticed: collaborators have included brands such as Fred Perry and Harris Tweed. The current collection stretches from classic-with-a-twist tweed suits (cropped double-breasted jacket, €500, and trousers, €195) and waxed cotton trenches featuring photography (€500), to flamboyant knuckle-duster- and scissor-print jackets (€300).

When they stop for breath, Lambert and Maidoh can be found DJing at international festivals such as Oasis in Marrakech and launching art and photography series, such as explorations of the female nude or police brutality.

The friends met more than 20 years ago at the doors of a nightclub in London’s Notting Hill; Lambert was the cool guy who glided past the rope while Maidoh was stuck at the door, too young to get in. “He thought I was losing my way,” Maidoh remembers. “He told me I should be at home studying.” Their paths continued to cross as Lambert built a reputation in Portobello Market as a stylist and designer who customised vintage items. Maidoh, still at college and nurturing a passion for music, would swap records with Lambert in exchange for tailoring favours.

“In the daytime I was Clark Kent; at night I was Superman,” says Maidoh, deadpan. “We were these two nerds wearing second-hand clothes,” Lambert adds. Eventually, they formed a collective steeped in the traditions of punk. “There were so many things we were all going through when we were young,” Maidoh recalls. “The whole punk lifestyle – from veganism to being politically and socially aware, to the clothing side of things – all of it drew us together.”

In recent years, Art Comes First has been moving towards a more streamlined model with its menswear collections, now culminating in a new made-to-order approach, with three to four designs developed in a single fabric. A capsule ready-to-wear collection will sit alongside the custom-made pieces. It’s a timely response to an industry grappling with equitable and sustainable practices.

Their business model reflects their personal choices. “First of all, we’ve cut down our clothes so we only wear black. Two: we only wear our own brand or brands that are friends. Lastly, we make sure everything is quality, so it lasts,” says Lambert, pausing briefly before adding: “And between us we swap and trade all the time.” They are also keen to support partners. “We didn’t just come to fashion as designers, we came as collaborators,” says Lambert, as Maidoh nods in agreement. “We want to make sure that every single person involved, as well as the person wearing it, is part of this collaborative project.” 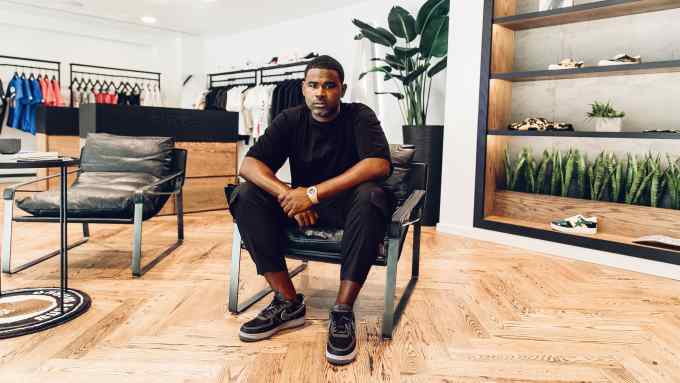