The model, musician and Manchester-transplant Karen Elson shares her guide to Music City

I first came to Nashville in 2005, shortly after I got married [to ex-husband Jack White]. We fell in love with the city and in this romantic daydream thought, “Let’s buy a house and see what happens.” It was quite impulsive. I didn’t know anybody here, so it was a case of jumping in the deep end. When I first moved, a lot of my New York friends would ask me what it was like – I don’t think they could imagine that there was any culture or interesting things to do here. It felt the same as how people in London can view northern England, where I’m from, like it’s somehow unseemly.

Nashville has all the things that a big city has – it is full of surprises. I’m surrounded by great artists and songwriters and there’s real camaraderie in the creative community. Something in the air makes you feel like all the resources haven’t yet been tapped. There is still a lot of ingenuity and inspiration that feels quite pure.

The famous nickname for Nashville is Music City and there is music everywhere. On any day of the week, you will find incredible live music at the Ryman Auditorium, one of the town’s oldest venues. Then there’s The Station Inn, a tiny dive bar where all the legendary Nashville songwriters and music royalty go. There are nights where Dolly Parton will show up and just perform a few songs, and I’ve seen a lot of amazing bluegrass music there. And I always recommend visitors make a pilgrimage to the Country Music Hall of Fame, where you can see Parton’s former outfits, Elvis’s gold Cadillac and old recordings from all the mainstays of American music. I absolutely love going there: it’s just so fun and you learn so much about all your favourite artists from way back.

Getting out in nature is also a big part of Nashville. When I need to clear my head, I often run around Percy Warner Park. A few times a week, I go to Radnor Lake, a gorgeous state park that’s filled with wildlife. You’ll often see nesting bald eagles as you’re hiking on a trail, or a little otter mulling around in the lake. It’s such a gem. My favourite time to go is in the autumn, when all the colours are changing – it has a special magic to it.

For vintage stores and little hole-in-the-wall places, East Nashville is a great place to shop. I love Relic Home, which is an interiors store run by my friend Alyssa Spyridon, selling antique rugs. Then there is G&G Interiors in Belle Meade, one of my favourite stores in town. It often stocks Astier de Villatte ceramics, Cire Trudon candles and the occasional Hermès ashtray.

Anybody coming to Nashville should try to make an appointment with Sarah Scarborough, aka the Tea Huntress. She has a space on 12th Avenue South where she hosts tea-meditation ceremonies. Scarborough travels all over the world to source her ingredients and makes custom-blend teas – I’m an obsessive tea-drinker and would knock back pints of it every day.

Germantown is where a lot of great restaurants in Nashville are located, like Rolf and Daughters. It has a sister restaurant, Folk, which is more casual: they serve delicious salads, pizza with clams or homemade pasta with the most unexpected ingredients put together, and the wine lists are exquisite. Another favourite is Bastion, whose chef Josh Habiger is a three-time James Beard Best Chefs in America semi-finalist. They serve small but well thought-out courses, and it’s all made in front of you.

HTSI
How to Spend It in... Bregenzerwald 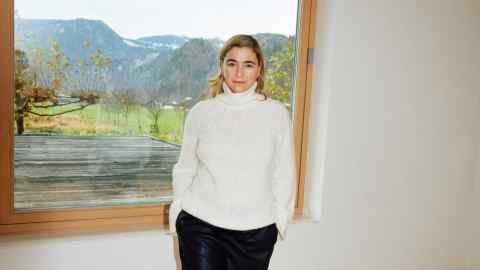 For a nightcap, I favour The Patterson House. It’s beautifully decorated, dark and moody, and the bartenders really know their cocktails. They change their menu seasonally. If you want somewhere that’s more of a dive, go to Robert’s Western World. It’s in the heart of downtown and there’s always live music.

For something really remarkable, the Nashville Symphony sometimes does movie nights where the orchestra plays the soundtrack while a movie is being screened. I took my kids there to see The Wizard of Oz and I’ll never forget how filled with awe they were. People often pigeonhole Nashville but in reality it’s filled to the brim with culture.

British Airways flies to Nashville from London, from £561 return