Without a scholarship, Tako Barsonidze would not be able to afford an executive MBA. Like many women, financial factors were the primary barrier to her enrolling at business school. Her concerns stem from the fact that she works in a middle-income economy — the former Soviet republic of Georgia — and is from a low-income background.

Barsonidze, 33, who started her course last month, was raised by a single mother in the period after the Soviet Union disbanded and the Georgian economy collapsed. “We were very poor,” she says. She was inspired to work in business by her grandfather, who taught himself how to fix cars out of the family home and saved them from hunger. “Since childhood, I’ve appreciated that businesses create jobs,” she adds.

She saw the EMBA at London Business School (LBS) as a way to transition from a legal career into consulting or entrepreneurship. But, without a scholarship covering 50 per cent of the $137,100 tuition fees, she could not have justified the expense. “For me, even half was difficult. I also plan to use a loan,” says Barsonidze, who is chief lawyer at the Georgian Energy Exchange, the electricity market operator. “My salary, which is good for Georgia, is not good enough for European prices.”

Financial aid is a tool that many business schools use to attract EMBA participants from traditionally under-represented groups, including women and black students as well as those from wider socio-economic backgrounds.

Barsonidze received her scholarship from the Laidlaw Women’s Leadership Fund. Since 2020, the fund has supported 60 women to pursue a degree at LBS, made possible by a £3.69mn gift from the Laidlaw Foundation.

The school itself has boosted its EMBA scholarship budget by 188 per cent year on year, as employer funding for these expensive degrees has fallen.

While diversity is widely seen as important to commercial success and learning outcomes, schools have struggled to tackle imbalances among under-represented groups. The picture varies globally but, for example, 33 per cent of students on FT-ranked EMBAs in 2022 were women. Data from AACSB, the accreditation body, shows 8.5 per cent of EMBA students in the US are Black or African-American citizens (compared with 12.4 per cent of Americans in 2020).

Cost is the main barrier preventing many people from accepting offers to business school. In the US, 30 per cent of female applicants cited obtaining funds as their main concern, compared with 9 per cent of men, according to the Graduate Management Admission Council.

This is because, in the years after university and before an EMBA, women are more likely to work in industries that pay less, according to Arnold Longboy, executive director of recruitment and admissions for LBS. “One thing we’re trying to do is diversify from traditional candidate pools: finance and consulting,” he says. “If you look at the education, non-profit or public sectors, there tends to be a higher representation of women in senior roles. So we’ve had to change our mindset in terms of who we target.”

Michael O’Leary, senior associate dean for graduate and executive degree programmes at Georgetown University McDonough School of Business in Washington DC, says EMBAs are hamstrung by the structure of the labour market. He notes that in the US, women outnumber men at bachelor level, and their participation in the workforce now rivals that of men — yet women are less likely to be promoted.

Another challenge is that EMBA candidates who study part-time are juggling their degree with professional and personal commitments. Although this means they maintain income, O’Leary says “this is the biggest barrier” to an EMBA, especially for people with childcare responsibilities. Given that women continue to bear most of this burden, it can make an EMBA programme less accessible for them. 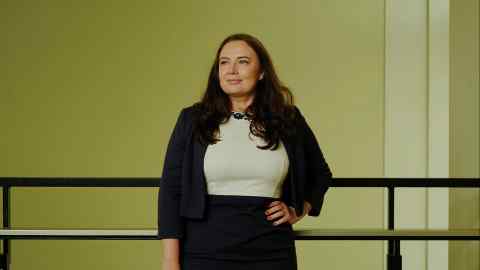 Georgetown has tried to tackle this problem by making the EMBA programme more flexible, increasing the proportion taught online and reducing the amount of travel required. In the 2021-22 academic year, the proportion of women in the school’s EMBA cohorts was above average at 45 per cent, while the proportion of US citizens and permanent residents who are from ethnic minorities was 47 per cent.

Other schools are investing in their career services as the proportion of EMBA candidates switching employers increases, with employers cutting back on funding. “If they are finding their next job, you need to facilitate that. It does translate to real dollars,” says Yael Grushka-Cockayne, senior associate dean for professional degree programmes at University of Virginia Darden School of Business in the US. “I view these activities as directly related to diversity, as it allows various people who couldn’t justify the expense to feel they get the return much quicker.”

Schools are also making entry requirements more flexible in order to recruit from a broader pool. At Insead, founded in France, prospective EMBA students can take the executive assessment (EA), a reduced-time admission test. Shorter in length than traditional exams, the EA can require less preparation, through courses and coaching, which can be expensive.

Katy Montgomery, associate dean of degree programmes at Insead, says that cultivating a diverse learning environment is becoming more of a priority for business schools because it enables EMBA participants to work effectively with people from varied backgrounds.

“People will do business globally,” she says, “so you have to be aware of your biases, defaults, and you have to be open-minded and sensitive and realise how to work with others. At the end of the day, it makes for more effective management.”