Help to Buy? What downsizers really need is Help to Sell

The aspirations of future homeowners are near the top of every British politician’s agenda, particularly when it comes to those in early adulthood. And with good reason.

Soaring house prices and deposit requirements mean current home ownership rates for those aged 25 to 34 years old have declined to around one in four, according to research from the Institute for Fiscal Studies. Yet those born a decade earlier would have been nearly twice as likely to own their own property.

The policy response? The Help to Buy initiative, aimed at helping first-time buyers scrape together the deposit needed to buy a property.

The Resolution Foundation think-tank estimates that 144,000 users have now been helped into home ownership, and 81 per cent of these were first-time buyers. I have serious reservations about this initiative, which I’ll come back to later.

But the report also points to an uncomfortable home truth. A staggering percentage of homes occupied by older homeowners have far more space than their owners want or need.

The policy we truly need is not Help to Buy but “Help to Sell”.

While some older adults may be particularly attached to their family homes, surveys suggest many others would like to move to more manageable, less expensive, homes.

In principle, this should be good news for aspirants to home ownership — if older folk downsized, it would put homes that are right-sized for growing families on to the market. However, the data point to several potential design flaws.

The English Housing Survey for 2016-17 shows that more than a third of owner occupiers are retired — nearly 5.1m in total — and of these, 61 per cent own their homes outright. Unlike first-time buyers, they don’t need help with finance. But they do need suitable properties to move into.

A 2016 report for the International Longevity Centre suggests that a significant percentage of older adults in the UK want to downsize, but at that time, there were only 128,000 specialist properties for older adults.

Given the forecasts for rapid growth in this segment of the population, why are housing efforts aimed only at younger adults and increasingly, those who don’t need help?

Neal Hudson, director at Residential Analyst, a residential property consultancy, says it is precisely that lack of choice that keeps many older adults in place.

“The lack of properties that people want to move into is certainly a big factor,” he says.

Life & Arts
Jancis Robinson on the upsides of downsizing 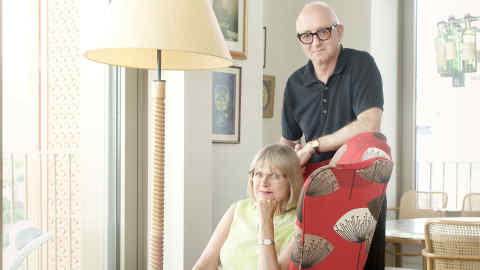 When discussing the housing needs of older adults, a clear distinction must be made between those seeking a smaller property and those needing residential care.

Statistically, there is some confusion about what exactly constitutes a retirement property. In a recent report, Knight Frank, the property consultant, points to signs that capacity is expanding, albeit slowly. It says the percentage of retirement housing units is now 2.6 per cent of UK housing stock, up from an estimated 1.0 per cent a few years ago.

Data from LaingBuisson, a healthcare data provider, make a further distinction between older adults needing nursing care and those seeking residential care beyond age 65. But a portion of specialist housing, says director William Laing, is in the form of “Care Villages” involving the purchase of a property with a contract for care services — and here is the sting in the tail.

When resold, these properties are “almost always sold at a loss,” he notes. “They do not sell at the price they were bought for. No one has worked out a good financial package.”

Mr Laing is thus raising a fundamental question about specialist senior housing; that is, are there structural flaws in the business model?

If you’ve ever flicked through a glossy brochure, you will know that this type of property does not come cheap.

Yet even those who own their homes outright may still not have enough equity to buy an average specialist retirement property. Some 22 per cent of those aged 65 and over have only £200,000 of equity in their home, according to Residential Analyst. Only 3 per cent have over £500,000 of equity.

McCarthy & Stone, the developer supplying roughly 70 per cent of UK retirement properties, recently announced that pre-tax profits for the six months to February 2018 had roughly halved to £10.5m, marked by a distinct slowdown in the rate at which it was acquiring development land.

McCarthy & Stone retains the freehold to its developments, charging leaseholders an annual ground rent of typically £400 to £500 per year on top of management and service fees. These are reviewed every 15 years and uprated in line with the Retail Price Index.

Government proposals to cap ground rents at a peppercorn rate put a hole in the business model because McCarthy & Stone sells the ground rents to institutional investors to help cover its development costs. Because retirement properties require that significant space be set aside for communal activities, developers cannot achieve the same occupational densities as large housebuilders.

Gary Day, executive land and planning director at McCarthy & Stone, says at least 70 per cent of the company’s residential units are sold at or above original purchase price. The company does not follow its smaller competitors in what has proved among the most contentious aspects of retirement home development — charging a so-called “event fee” that crystallises upon sale.

The subject of a Law Commission probe last year, it found that buyers of some retirement properties faced “event fees” of up to 30 per cent of the property’s purchase price if it was sold, sub-let or had a change of occupant.

Knight Frank calculates that “event fees” are usually charged at 10 to 20 per cent of a property purchase price, or 1-2 per cent annually. Indeed, such fees contribute to the discount to purchase price seen upon disposition of a retirement property. The Law Commission report did not urge banning these, but said that greater transparency at the point of purchase was needed.

Mr Hudson says that no matter what form the business model takes, there is a real obstacle in further provision of retirement living — the price of land itself.

The value of undeveloped, greenfield land more than doubled over the 20 years to 2017, according to Savills, the property consultants, and has risen 61 per cent since the market trough in 2009 following the financial crisis.

Mr Hudson points to the share prices of the nation’s large housebuilders which have surged since the advent of Help to Buy, noting that this has happened in the face of rising building and development costs.

Using Persimmon as an example, where gross profits per plot have trebled between 2010 and 2017, steady land acquisition costs are the driver.

Help to Buy has certainly helped the housebuilders, but what about the home buyers who have benefited from this policy?

Data from Resolution Foundation show that three out of 10 beneficiaries had incomes greater than £60,000, suggesting this form of state aid is going to those who need it least.

Further evidence can be found in the rate at which median incomes of those using Help to Buy have risen since its launch in 2013 — a rise of 34 per cent — twice the rate of that for the average first-time buyer.

The policy also risks “baking in” rising housing demand into prices; a problem for most millennial workers who have seen only modest wage growth in recent years.

Both ends of the property ladder could be helped by shifting the policy focus to the “last time buyer”.

And while there are many suggestions for policies that might encourage expansion of retirement dwellings — including easing of stamp duty, and easing requirements to build local infrastructure — one of these must be tackling land prices.

Taxation of hoarded land with residential planning permission would be a good place to start.

Norma Cohen is the FT’s former demography correspondent and a PhD candidate at Queen Mary University of London Twitter: @normacohen3