What to expect as Russia warns of historic debt default

Russia is due to make two interest payments on its dollar bonds on Wednesday, but it is unclear whether western investors will actually receive their cash, potentially lining up a uniquely messy government debt default.

Russia’s first default since 1998* would complete a staggering turnround. Before it invaded Ukraine, Russia was considered one of the most creditworthy countries in the world, with its low debt levels and vast oil and gas exports.

But unprecedented western sanctions aimed at cutting off Russia from the global financial system have sent the country’s markets into freefall and complicated the process of servicing debts.

Russia is scheduled to hand investors a total of $117mn in interest payments on two of its bonds. It has a standard 30-day grace period in which to pay up. If it does not, that would constitute a default.

The finance ministry said on Monday that it had ordered the payments to be made as usual, but added that its ability to do so could be curbed by western sanctions against the Russian central bank. Finance minister Anton Siluanov said those sanctions — brought in earlier this month — were bouncing the country into an “artificial default”.

Markets have already largely priced in a default. Russia’s foreign bonds are trading at about 20 per cent of their face value — a level that suggests very little confidence of being repaid. Credit rating agencies, which up until late February awarded Russia investment-grade status, have slashed it to the very lowest “junk” ratings, with Fitch Ratings saying a default is “imminent”.

In reality, there are multiple official ways of being declared in default, such as judgments from courts, from rating agencies, or from the finance industry trade body that adjudicates on whether investors can claim on their default insurance.

If Russia pays in roubles, is it still a default?

Siluanov has said it is “absolutely fair” for Russia to make payments on its government debt in roubles until sanctions that he claimed have frozen nearly half of the country’s $643bn in foreign exchange reserves are lifted.

But payment in the Russian currency would still constitute a default in the eyes of most western investors, and not only because of its recent drop in value. Six of Russia’s 15 dollar- or euro-denominated bonds do contain a “fallback” clause allowing repayment in roubles, but the two bonds with coupons due on Wednesday are not among them.

In any case, investors in Europe and the US say sanctions — both their own governments’ and Moscow’s — would in practice make it impossible to set up the Russian bank accounts necessary to receive rouble payments. Lawyers say that even with the loophole of the alternative payment clause, a Russian default is likely and litigation almost inevitable.

How much debt is at stake, and who holds it?

Wednesday’s payments directly concern Russia’s $38.5bn of foreign-currency bonds, of which roughly $20bn are owned by overseas investors. But foreigners also hold roughly 20 per cent of Moscow’s local currency debt — which totalled roughly $200bn before the war sparked a collapse in the value of the rouble and made the bonds virtually untradeable.

The Russian government has already said that a recent coupon payment on these local bonds would not reach foreign holders, citing a central bank ban on sending foreign currency abroad. This has already been painful for western asset management groups. More than two dozen have had to freeze funds with significant Russia exposure, while others have sharply written down the value of their Russian holdings.

Typically, a default is followed by a period of negotiation between a government and its bondholders to reach an agreement on restructuring the debt. This is usually done by eventually exchanging the old defaulted bonds with new, less onerous ones, either simply worth less, with lower interest payments or with longer repayment schedules — or a combination of all three.

Investors are usually reluctant to head to court and get a formal default declared because that could make the entire bond come due and potentially trigger defaults in other bonds where payments have not been missed.

But a “normal” restructuring seems unlikely in Russia’s case. The sanctions are designed to lock the country out of global bond markets and the participation of western investors in any new debt sales is forbidden.

Instead, investors will probably have to sit tight, writing off their Russian bonds and awaiting a de-escalation in the Ukraine conflict that might lead to an easing of sanctions. Some may actually want to quickly vote to demand immediate repayment and get court judgments from US and UK judges that allow them to try to seize overseas Russian assets, to ratchet up pressure on Moscow.

In the meantime, some investors will be hoping that the failure to make interest payments triggers a payout on credit-default swaps — insurance-like derivatives used to protect against default. The decision will be made by a finance industry “determinations committee”, made up of representatives of big banks and asset managers active in the CDS market. The swaps may not end up helping bondholders, however, because the financial sanctions could snarl up the intricate system used to settle the contracts.

Will a default spark a financial crisis?

The aftermath of Russia’s last default in 1998 looms large. Moscow’s shock decision to devalue the rouble and renege on its local debt followed on the heels of the Asian financial crisis and sent shockwaves through financial markets, leading to the near-collapse of US hedge fund Long-Term Capital Management, and its bailout by a consortium of banks.

Even then, Russia kept up payments on its dollar bonds, but defaulted on some Soviet-era international bonds. The last complete external default came in 1918, when the Bolshevik regime repudiated Tsarist-era debts following the Russian Revolution.

Analysts are relatively confident a rerun of 1998 can be avoided. Nikolaos Panigirtzoglou of JPMorgan points out that foreign investors and banks have already been cutting their exposure to Russia since the country’s 2014 annexation of Crimea, unlike the mid-1990s when highly leveraged funds were loading up on Russian assets. So far, the invasion of Ukraine has sparked only modest contagion in other emerging markets, with the far more significant fallout from the crisis being felt in a surge in commodity prices.

Nonetheless, the history of finance is littered with examples of how unexpected second-order effects from widely anticipated events still ended up causing broader calamities.

The 30-day grace period means this “probably isn’t yet the moment where we see where the full stresses in the financial system might reside . . . However, this is clearly an important story to watch,” said Jim Reid, a senior strategist at Deutsche Bank.

*This article has been amended since original publication to reflect the fact that Russia did not default on any of its international Russian Federation-issued “eurobonds” in 1998, but did restructure Soviet-era, dollar-denominated “Brady bonds”

Explore the series
READ MOREWar in Ukraine: free to read
At the gateway to Kyiv: Ukrainians dig in to resist Russia’s onslaught 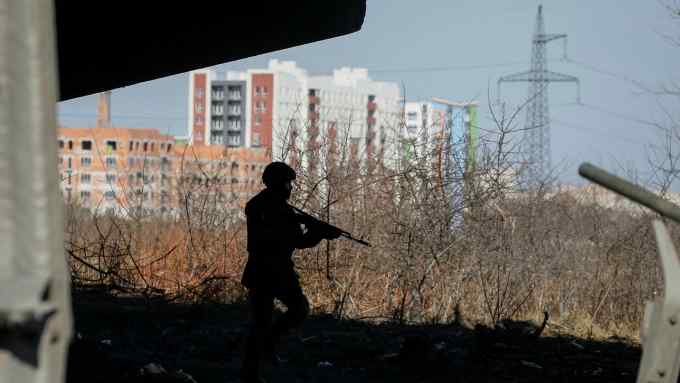