The market for exchange traded funds has boomed in recent years but with greater take-up comes greater competition and increased cost pressures on index providers.

The global ETF market reached $5.5tn in June, up from $3tn three years ago, according to consultancy firm ETFGI. The total market for exchange traded products stood still higher at $5.6tn.

Sanjay Arya, head of indexes at data provider Morningstar, says the industry has become a “monopoly-like structure where there’s a handful of large providers who’ve established strong brand presence”. Meanwhile, fees are “disproportionate to the value that is being brought in”.

Mr Arya is not alone in his criticisms. Asset managers have woken up to the high fees they pay index providers, leading price cutting across the industry. Figures from JPMorgan show that from 2012 to 2018, average ETF fees in the US tumbled about 40 per cent as index providers responded to demands for lower charges.

Edmund Shing, global head of equity and derivatives strategy at BNP Paribas, says “lots of different versions of the same product” exist, making it easy for new entrants to undercut in price terms. 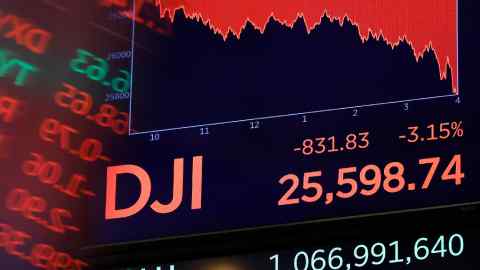 In 2016, MSCI generated $613.6m — more than half of its revenue — from its indexing business, by charging asset managers fees depending on the amount managed against its benchmarks.

That same year, Morningstar launched its Open Indexes Project, offering 100 benchmark indexes for free. “What [the biggest companies] provide isn’t unique,” Mr Arya says. “Back when they launched, it was very unique and nuanced. However, today anyone with technical capabilities can capture that.”

Three years since its debut, up to 140 companies use Morningstar’s benchmarks. Switching provider is one way that asset managers are taking a stand against high fees.

Since the introduction of the EU-wide Mifid II regulation last year, asset managers have been cutting costs on many fronts. Taking benchmarking in-house is one route to making savings. “Paying a market premium . . . those days are numbered,” says Mr Arya.

By self-indexing, firms can both reduce costs and exercise greater control. Min Moon, head of index and portfolio strategy at JPMorgan, says firms are motivated by the “ability to apply a new methodology to design more niche investment products”.

There is still a need for some degree of brand recognition

Nick King, head of ETFs at Fidelity International, echoes this view. The £243bn asset manager has four ETFs tracking its own-brand indices and says one benefit of self-indexing is the ability to establish Fidelity’s own “intellectual property into the index design”.

But with greater power comes greater responsibility. Self-indexing opens up greater scope for scrutiny of potential conflicts of interest. Last year, the Securities and Exchange Commission, the US markets watchdog, said it wanted more disclosure from self-indexing ETF managers. Regulation in Europe is in place, with the European Benchmark Regulation helping to mitigate risks for investors.

Another noticeable difference on the opposite sides of the Atlantic is the level of switching by asset managers. In the US, “there has been an explosion of innovation” in ETFs, says Mr Shing, “in particular with the launch of a host of thematic ETFs in more and more niche themes”.

In Europe by contrast, “there is a lot more replication of the same, or similar, indices by different ETF providers, and far less true innovation in the form of unique strategies or themes,” he adds.

Despite rising cost competition in the industry, analysts believe that the larger players have no reason to be worried just yet. S&P Dow Jones, MSCI and FTSE Russell have seen their combined market share climb from 60 per cent in 2012 to 80 per cent in 2018, according to data from consultants Burton-Taylor.

Brand recognition still plays a significant part in how investors choose their benchmarks and, as more index providers emerge, there is greater scope for uncertainty.

“There is still a need for some degree of brand recognition for the ultimate user to gain comfort that the index calculation has been done in a way that satisfies best practice,” says Richard Dell, head of equity market research at Mercer Investments. “People are comfortable with how large index providers define emerging markets, for example.”

New themes and charging structures may be popping up but Mr King argues that large asset managers are less inclined to jump ship so quickly: “I expect the larger index providers to maintain their dominance for the foreseeable future, particularly for core exposures.”