The gulf between short- and long-term US borrowing costs has reached its widest point since 1981, in a sign investors expect the Federal Reserve to stay the course in its battle to tame inflation, even as recession worries mount.

The two-year Treasury yield traded on Wednesday at 4.2 per cent, while the 10-year yield stood at 3.4 per cent, bringing the difference between the two to 0.84 percentage points. The pattern, known as a yield curve “inversion”, has preceded every US economic downturn of the past 50 years.

The deepening of the inversion comes after a report last week showing the US economy continued adding jobs at a robust pace in November and an important survey indicating activity in the vast services sector is continuing to grow rapidly.

While the data paint an upbeat picture of the state of the economy, some investors are worried that it will also encourage the Fed to keep pushing interest rates higher next year, after taking them from near zero to a range of 3.75 to 4 per cent so far in 2022. Higher borrowing costs, in turn, are expected to heap pressure on the economy and potentially trigger a recession.

“The market had been betting that the Fed would be forced to slow down. The past year has taught us that the market has been wrong over and over again on this assumption,” said Edward Al-Hussainy, a senior analyst at Columbia Threadneedle.

Shifts in the US bond market also show investors moving more in alignment with what the Fed has said it expects for the coming year. Though the yield curve has been flattening all year, it bounced off of lows in late November and investors last week began pricing in two interest rate cuts by the end of 2023, both indicating a loosening in monetary policy.

This gap between the Fed and the market was especially evident after a speech by chair Jay Powell last week in which he signalled that although the US central bank would slow its pace of rate increases at its December meeting, it would do so to allow rates to remain higher for longer. Markets focused on the first piece and not the second.

After the release on Friday of the US jobs report, however, the steepening move in the yield curve unravelled, though rate cuts next year are still priced in. Futures markets currently suggest the “terminal” federal funds rate, or the peak in this cycle, will be about 5 per cent in May, from expectations of as low as 4 per cent in September.

“The [November] payrolls report reminded us that the job market remains in a very good place, and we’re expecting to see that reflected in a higher terminal rate in the dots,” said Ben Jeffery, a US rates strategist at BMO Capital Markets, referring to the Fed’s quarterly poll of officials on where the economy and monetary policy will be in the years ahead — also known as the “dot plot”. The next dot plot will be released at the Fed’s December meeting.

The most basic signal sent by the yield curve inversion is that investors believe the Fed’s increases in short-term rates will be successful in sharply slowing inflation. The magnitude of this inversion then reflects both the dramatic pace of rate increases, and the fact that the Fed has stuck with that pace even as investors have shifted their expectations on inflation and growth.

“We think the shape of the yield curve is a measure of the extent to which monetary policy can tighten, and the market clearly thinks that tightness is going to persist for quite some time,” said Mark Cabana, head of US rates strategy at Bank of America.

Jonathan Cohn at Credit Suisse added that the deepening yield curve inversion suggests investors believe the Fed is committed to “inflation moderation even if it must sacrifice forward-looking growth or recession”. 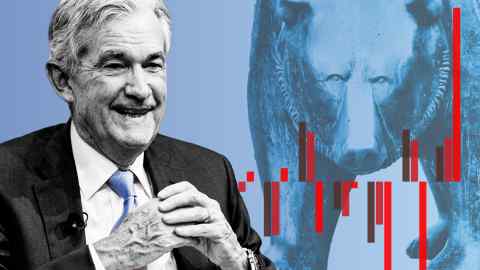 In a December survey conducted by the Initiative on Global Markets at the University of Chicago Booth School of Business in partnership with the Financial Times, 85 per cent of economists said they expected the National Bureau of Economic Research — the arbiter of recession in the US — will declare one by next year.

Though the yield curve has been a reliable indicator of recession, the information conveyed by the depth and extent of the inversion is up for debate.

“The inverted yield curve is actually a pretty good signal of recession, without providing information as to its depth or severity,” said Guy LeBas, chief fixed-income strategist at Janney Montgomery Scott.

“In this case, the inversion is probably telling us more about inflation and the direction of inflation risks than the depths or severity of a recession.”

While strategists such as LeBas argue that the degree of the yield curve inversion may not directly predict the extent of the coming recession, the current deepening could have broader ramifications if it leads to changes in investor behaviour.

“The more important aspect of the yield curve is what it does to risk-taking,” said Gregory Peters, co-chief investment officer for fixed income at PGIM. “It’s a self-reinforcing mechanism.”