The yen teetered on the edge of a historic support barrier on Thursday after trading in New York sent the Japanese currency to a 20-year low against the dollar and revived speculation that its fall could deepen.

By noon, the yen stood at ¥134.45 against the dollar, bringing it closer to the ¥135.15 level it reached during the turmoil of Japan’s 2002 banking crisis and approaching lows of more than ¥145 in 1998 during the Asian financial crisis.

The yen began its descent in March, falling out of the tight range it had occupied for the previous six years as a result of the Bank of Japan deciding against tightening monetary policy.

As interest rates rise in the US and elsewhere, traders are focusing on the widening differential between yields on those countries’ sovereign bonds and Japan’s.

The low yen is driving up the cost of imported goods for the Japanese economy. Bank of Japan governor Haruhiko Kuroda was forced to retract his claim that consumers had become more “tolerant” of price rises after a public backlash.

Shusuke Yamada, head of Japan FX and rates strategy at Bank of America, said that while recession fears in the US may have damped the dollar’s rise over the past few weeks, investors expected the interest rate spread between Japan and the US to persist for a few years.

“A slow slowdown in the US could be negative for the yen,” said Yamada.

The drop on Thursday took the yen into a fifth straight day of declines, marking a period that has prompted several investment banks, including Nomura, to hastily revise their forecasts for the rest of the year.

“Given the recent price action and the fundamentals supporting it, we now see a risk of USD/JPY remaining above ¥130 longer than we previously assumed,” said Nomura FX strategist Yujiro Goto.

Nomura now expects the currency to stabilise in June at ¥132 against the dollar, having previously predicted it to trade at ¥125.

The most bearish forecasts for the yen predict it could fall as low as ¥140-¥150, creating a short-term boost to profits across large parts of corporate Japan but amplifying the hit from higher costs of imported energy and other commodities.

In a recent report on the impact of the weak yen on corporate Japan, CLSA strategist Nicholas Smith said that a poll of companies covered by the brokerage found that the average forex assumption was fixed at about ¥110.05 against the dollar, suggesting that many companies will announce windfall profits in the quarter ending later this month. 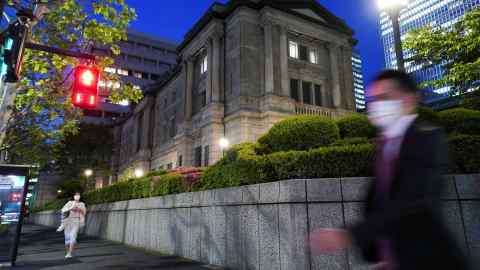 “Retailers are unsurprisingly the main losers, while automakers are the main winners from the weak yen,” said Smith.

Currency analysts at Goldman Sachs said that there was a possibility of intervention by the Japanese authorities if the yen continued to fall much further, though they noted that Kuroda has reiterated the mantra that a weak yen benefits the economy if its moves are not too sharp.

“We continue to see rising risk of intervention as USD/JPY grinds higher, but the consistent tone from policymakers despite the cross rallying towards ¥135 signals some tolerance for further depreciation,” said Goldman Sachs analysts in a note to investors on Thursday.