Start a 4-week trial
How To Spend It  Jewellery

Nick Foulkes says that when it comes to jewellery, as with most things in life, more and more is more

If the epicene youths photographed for the recent catalogues of Cartier and Boucheron (where one young man’s ear is impaled by a large diamond arrow, the fletching protruding about the helix of his auricle, the barbed arrowhead emerging from his lobe) are anything to go by, the grandes maisons are mining a new seam of jewellery wearers.

It’s a trend I wholeheartedly applaud. Indeed, if I think about it, I find it is in fact a moment for which I have been waiting since the early 1970s. I was not an overly robust child. I was profoundly allergic to the sort of activities later proselytised by Conn Iggulden in The Dangerous Book for Boys – if I climbed any trees as a child, the memory of that trauma has been erased. I do, however, have vivid recall of the moment of Arthurian epiphany I experienced in 1972, when, rather than pulling a sword from a stone, I found a silver and onyx ring in the park. Cinderella-like, it fitted on my finger.

Unknowingly, I had just purchased myself a lifelong season ticket for a journey into male jewellery. I think that my eight-year-old self would approve of having ignited a passion that, at the moment, runs to six rings, two necklaces and one bangle, all worn daily.

I remember being off school a lot and whatever illness assailed me, the treatment always involved being wrapped up in a blanket in the manner of the patients in Thomas Mann’s The Magic Mountain. But being altogether too delicate to be placed in the bracing “fresh air” like Mann’s convalescents, I was installed in front of an afternoon matinee on television, where I would devour the style of men who became my idols: Fred Astaire, Stewart Granger et al.

Off screen, these stars were never less than perfectly turned out: hair coiffed and Brylcreemed into place, bespoke suit pressed, and, poking out from underneath a crisply laundered cuff, the links of a bracelet. Kenneth More, Laurence Harvey and Noël Coward are just a few of the bracelet wearers I remember, and the juxtaposition of formal dress with a chain hanging louchely from the wrist was to my child’s eye a signal of an artistic temperament tempered by classic elegance.

I pestered my parents for a silver identity bracelet with curb links and my name engraved in fluid, looping copperplate on the panel. I’d love to say that we visited Cartier in London. Instead, we went to a jeweller on Brighton’s Western Road. I remember a penumbral, almost cathedral-like solemnity to the event and the near-physical pain I experienced when later I put a scratch on it.

Since then, wrist enhancement has been a constant in my life. The peak was reached a little over a decade ago, when I had a wrist that jangled with around a dozen bracelets.

Back in the days when I used to pass through an airport at least once a week, having to remove and then reassume all this ironmongery added to the stress of travel, so I cleared my wrist to the positively minimalist, single rustic elephant-hair bangle from the 1930s. That said, since my air travel has been curtailed by Covid, I have been pestering Alexander Mavros to make one of his signature bangles in gold to wear with it.

Compensating for the decline in bracelets has been a rise in the number of rings I wear, to the point at which a friend recently described my hands as looking like a cabinet of curiosities trying to emulate a pair of knuckledusters. My taste for finger ornamentation had been in abeyance until about 20 years ago, when a friend gave me an agate cameo ring depicting Socrates.

Of course, a man in possession of a cameo is in need of an intaglio ring, and when the sardonyx intaglio depicting a young Julio-Claudian sheared off, I opted for a tougher, allegedly Punic-era intaglio of a lion carved into fossilised wood. Thereafter things have arranged themselves. A ferocious gargoyle-like mask ring with tiny eyes of glinting ruby that had lain unsold at Nardi of Venice for over half a century has found a home on my hand; a modern amethyst episcopal ring with a crozier and crucifix engraved on the shank and shoulder has found its partner in a Grima star-ruby ring of textured gold on the little finger; while a 17th-century cameo of what I was told is a Medusa sits happily next to Socrates, who started it all. I only have my index fingers left to fill, and this not for want of trying by several purveyors of elegant gewgaws, most notably Simon MacLachlan of Piccadilly Vaults.

While he has yet to get a ring on my finger (that doesn’t read entirely right), MacLachlan can console himself that he sold me my latest medallion: a handsome little figure that looks half pre-Columbian Mayan deity, half Trader Vic’s-style Tiki souvenir, signed Bulgari.

My necklace motivation comes from the great playboys of the 1950s and 1960s: Prince Alfonso von Hohenlohe, Gunter Sachs and Gianni Agnelli. Whenever they were water-skiing, sailing or lolling nonchalantly at the controls of a Riva Aquarama, a slender gold chain and some sort of pendant nestling in a mat of chest hair were de rigueur.

my hands are like a cabinet of curiosities emulating knuckledusters

A case of midlife crisis? I daresay there is some truth in that, but this is where I find that jewellery comes into its own. I do not have a mariner’s licence, or whatever it is called, and given my record with powered machinery (I have crashed numerous cars, two motorcycles, a snowmobile and a quad bike), I’d be mad to take up powerboating. By contrast, jewellery, while it can be expensive, is less hazardous than a traditional midlife crisis played out at the steering wheel of an age-inappropriate sportscar.

How To Spend It
The ice pack: how hip-hop jewellery became big business 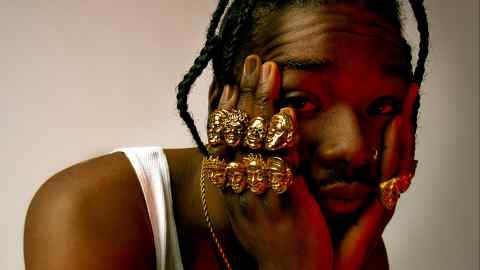