Mickes, unlike most record shops in Europe, is still open for business. The compact store in southern Stockholm, crammed with thousands of vinyl LPs, last week enjoyed a steady stream of customers taking advantage of Sweden’s no-lockdown approach to coronavirus.

But owner Micke Englund said that while he was happy his shop was not closed, his business had still been hit hard by Covid-19. “When people became aware of coronavirus around March 12, we lost almost overnight 30 per cent. It’s OK. For a couple of months, it will work. But after that it will be very, very tough,” he said.

Sweden refused to follow other European countries in closing its primary schools and kindergartens or banning people from leaving their homes, arguing that taking such “draconian measures” was not sustainable and could unnecessarily harm the economy. Swedish business leaders such as Jacob Wallenberg have urged authorities to take a broader “life versus life” approach that considers the economy as well as health, or risk social unrest.

Early figures for Sweden’s gross domestic product in the first quarter of 2020, released this week, suggested that at least in March it had performed better than much of the EU as it recorded a decline of just 0.3 per cent, compared with a 3.8 per cent fall for the eurozone.

But economists argue that Sweden is unlikely in the long term to escape the severe economic pain of the rest of Europe. The European Commission forecasts that Sweden’s GDP will fall by 6.1 per cent this year.

The Riksbank, the country’s central bank, has an even gloomier outlook, estimating that GDP will contract by 7-10 per cent, with unemployment peaking at between 9 and 10.4 per cent. These are disastrous figures for the Scandinavian country.

“It is too early to say that we would do better than others. In the end, we think Sweden will end up more or less the same,” said Christina Nyman, a former deputy head of monetary policy at the Riksbank who is now chief economist at lender Handelsbanken.

One big reason is that Sweden is a small, open economy with a large manufacturing industry. Truckmaker Volvo Group and carmaker Volvo Cars were both forced to stop production for several weeks, not because of conditions in Sweden but due to lack of parts and difficulties in their supply chains elsewhere in Europe. Ms Nyman noted that despite being relatively little hit directly by the 2008 financial crisis Sweden’s economy still suffered more than many.

Data on the use of public transport, credit cards and restaurants show big falls in Sweden as authorities urge people to work from home where possible and maintain social distancing. But the declines are less precipitous than other European countries under full lockdown. 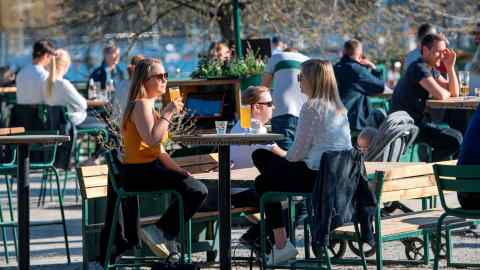 “Activity in Sweden is grim, maybe not as grim as elsewhere, but it is still unprecedented declines,” said David Oxley, senior Europe economist at Capital Economics.

He argued that the relatively healthy first-quarter growth figures were helped by January and February being stronger than expected. For March, he added: “It’s certainly reasonable to expect that they wouldn’t experience the same sudden stop as other economies.”

Ms Nyman said she believed that without the no-lockdown policy, Sweden would have been harder hit, as in 2008. “If we didn’t have these better circumstances, we would have done worse. Usually, we are more severely hit by a global recession,” she added.

Economists at Swedish bank SEB estimate Sweden’s GDP will drop 6.5 per cent this year, about the same as the US and Germany, but a little better than Norway and ahead of 9-10 per cent falls in Finland and Denmark, all of which have had lockdowns.

The Riksbank has focused on keeping the supply of credit functioning rather than rate cuts. Governor Stefan Ingves told the Financial Times that much of the economy had shut down “in one way or the other” and that “if people are staying at home, it’s hard to stimulate”.

Asked if Sweden’s economy would fare better than others’, he replied: “We simply don’t know. I’m not an epidemiologist. There are so many unknowns in all this. Different countries will do different things because they have different ways of deciding. Time will tell where we end up compared with other countries.”

Some suggest that Sweden may reap some benefits as it continues with its current path while other countries grapple with how to reopen their economies. “Sweden’s strategy should be sustainable for a long time. When you open up, people can be more afraid, there’s more uncertainty,” said Ms Nyman.

But Mr Oxley stressed that Sweden was still dependent on demand and supply chains in other countries. “There’s only a limited amount of upside to being contrary when the rest of the world is doing the opposite,” he added.

Back at Mickes record shop, Mr Englund said that many had compared Sweden’s high death toll unfavourably with neighbouring Denmark, Norway and Finland, but that it came out well compared with the UK, France or Italy.

“When they open up the countries again, they will start from square one. We won’t. But no one knows if our strategy was good, very good, or a disaster. Maybe we will know in a year’s time,” he added.

READ MOREClimate change
Can we tackle both climate change and Covid-19 recovery? | Free to read 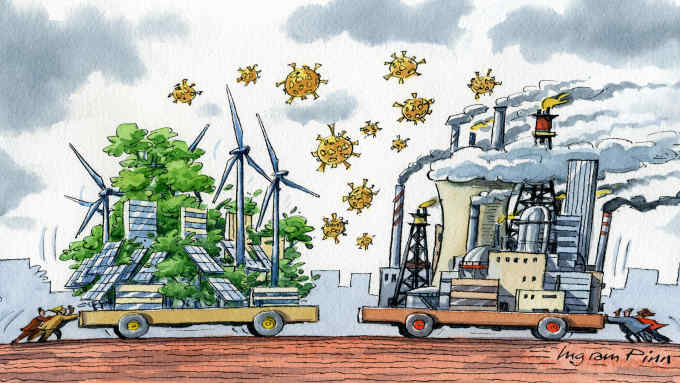