China and Singapore are “making good progress” in developing an exchange traded fund connectivity programme, according to a statement from China’s securities regulator.

“Currently, there has been positive progress made in a joint programme between Shenzhen Stock Exchange and the Singapore Exchange, and both sides will actively push for early realisation of connecting the ETF markets,” according to a transcript of a speech made by Fang Xinghai, vice chair of the China Securities Regulatory Commission.

Fang did not elaborate further on how the two ETF markets would be connected nor the timeline of such a launch.

Attending the opening of the annual China-Singapore Connectivity Initiative Financial Summit on Tuesday, Fang said that a closer collaboration between regulators in the two markets would “facilitate the operations of financial institutions from both sides in each other’s capital markets”.

China’s equities ETFs have surpassed Rmb1tn ($157bn) in aggregate assets in November, more than a decade and a half after the first onshore strategy came on the market, Wind data show.

The rapid growth of the onshore stock ETF market has benefited from a push from regulators and stock exchanges in Shanghai and Shenzhen, the transparent, low-risk and affordable nature of the ETF product, and the proliferation of thematic strategies.

At the same time, regional investor interest in China-linked ETF products has also grown, including in Singapore.

The Hong Kong-based asset manager said at the time that the rapid rise in the ETF’s asset pool was partly driven by China’s stable economic recovery, the appreciation of the renminbi and the inclusion of Chinese government bonds in a FTSE bond Index.

In the past few years, China has rapidly developed multiple ETF cross-listing schemes with overseas exchange partners, with varying rates of success, as regulators try to tap demand for passive exposure to Chinese markets regionally and globally.

In 2019, the Shanghai exchange established an ETF connect scheme with Japan, allowing four Chinese and four Japanese asset managers to list ETFs on both bourses and invest in each other’s markets.

Last year, regulators in Shenzhen and Hong Kong set up a cross-listing master-feeder framework, with three pairs of ETFs approved for sale in the respective markets.

Neither the Hong Kong, nor the Japan ETF connectivity schemes have yet taken off, however.

The China-Hong Kong master-feeder scheme had a relatively subdued launch in August last year and still lacks clear regulatory guidelines on products that might qualify for the scheme. Few new products have been approved for the scheme since the initial batch of ETFs were listed in October last year.

The model allows South Korean and Chinese fund groups running ETFs in Shanghai or Seoul to link a locally listed strategy to one listed on the other exchange, giving access to local securities and broadening sales prospects outside the home market.

It is still unclear when the scheme will launch and what ETF strategies each exchange will bring to the neighbouring market, but industry experts predict that the flow of investment is likely to be dominated by South Korean investors investing in China-themed ETFs.

The Shanghai bourse, which launched its first onshore ETF product in 2004, has also set its sights on establishing cross-border ETF listing schemes with Switzerland and even Pakistan.

Between January and October this year, China saw net inflows of Rmb241bn into onshore assets from global investors via the QFII scheme and stock connect programmes between Hong Kong and the two mainland exchanges in Shenzhen and Shanghai.

As of end-October, foreign investors held Rmb3.67tn worth of China A-shares, making up about 5 per cent of the combined market valuation. 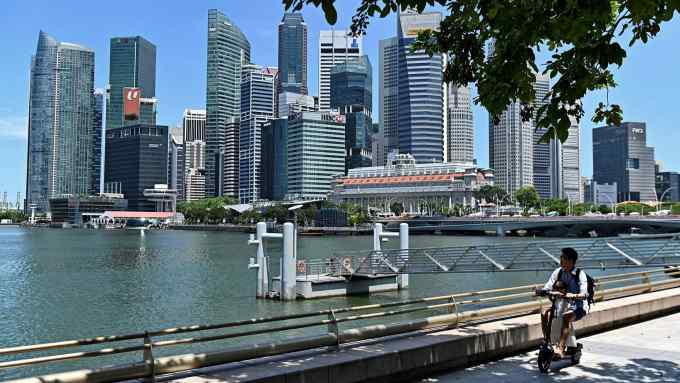