The pre-owned watch market is the industry’s fastest-growing sector, with specialist resellers and watch brands vying to cement their place in it. Sales are forecast to approach $30bn by 2025, and growth in high-end segments is already outpacing that for new watches.

One player expanding its presence is online marketplace eBay. Last year, a watch was sold every 28 seconds on the platform, and activity is increasing: eBay group revenues were up 14 per cent year on year in the second quarter to June 30, to $2.7bn; the company reported 159m annual active buyers and 19m active sellers globally.

Luxury categories such as fashion training shoes and watches are seeing notable growth, says eBay, which in September 2020 launched its “authenticity guarantee” service. This offers physical inspection by independent authenticators of any watch sold on its site for $2,000 or more. The service has also been extended to the UK, for watches priced at £2,000-plus.

A report by intelligence provider The Business of Fashion and consultants McKinsey, published in June, forecast that the pre-owned watch market would post sales of $29bn-$32bn by 2025, up from $18bn in 2019. That would make it more than half the size of the primary market, and faster growing than the market for new premium to ultra-luxury watches, which is set to expand by just 1-3 per cent annually.

Digitisation has been the main driver of growth: 30 per cent of pre-owned premium and ultra-luxury watches are now sold online, says the report, compared with 5 per cent of new pieces.

The eBay authenticity programme is seeking to tap that online market. In an eBay study conducted in July with about 1,000 US consumers, 52 per cent of respondents said fears around authenticity were a reason for not buying a pre-owned luxury item. Meanwhile, 44 per cent cited condition and 40 per cent gave quality as concerns, with 39 per cent saying they did not trust sellers. “We’re developing a playbook and platform around authentication that is very scalable,” says Tirath Kamdar, eBay’s general manager of luxury.

Watches under eBay’s authenticity guarantee go to a third-party servicing and authentication company, Stoll & Co, which tags each piece with a tracking barcode before inspecting the crown, bezel, dial, case, clasp or buckle, hands, end links and reference number. It also checks for damage and whether parts have been swapped, along with waterproofing and collateral such as the box and papers that came with the watch.

“Our aim is to make sure the watch matches the listing,” says Graham Foster, head watchmaker at Stoll & Co. In addition to his team of watchmakers, equipment such as high-definition cameras are used to enable Stoll staff in eBay’s authentication centres around the world to examine, discuss and authenticate a watch simultaneously in real time.

Discrepancies are sent to eBay’s customer services team — the UK arm has staff dedicated to watches and training shoes — who inform buyers and ask whether they are happy to proceed with the sale. Further protection is offered via eBay’s money-back guarantee. The company has also introduced an escrow service for watches selling for $10,000 or more, where funds are held securely until completion of the transaction.

The aim is to create an end-to-end experience. “It’s firstly around the operations — having the right processes, systems and technologies — and, at the same time, a user experience,” says Kamdar.

At the end of the verification process, buyers are issued with a certification card embedded with near-field communication technology linked to eBay’s guarantee. Any watches that buyers choose to return are sent to eBay’s authentication centre to undergo the same checks before being returned to sellers.

The most expensive pre-owned watch sold on eBay.co.uk in the past three years was a 2019 Rolex GMT Master II in rose gold with a black dial, which went for £50,000. Rolex, Omega and Tudor are the most popular brands sold on the platform — the Rolex Datejust, Omega Seamaster and Tudor Black Bay are among the most sought-after models, echoing the resale market generally.

According to the BoF-McKinsey report, the majority of pre-owned sales in the premium to ultra-luxury categories are to two types of buyers: watch enthusiasts who are after a particular vintage model and frustrated buyers who can’t find the watch they want in traditional retail channels because of limited supply.

These groups are also more likely to pay a premium for a pre-owned watch and seek out exclusive models — such as the Rolex Daytona, Patek Philippe Nautilus and Audemars Piguet Royal Oak — which are selling in the pre-owned market at significant premiums (as much as 140 and 146 per cent respectively for the Daytona and Nautilus).

Kamdar believes eBay is helping address the scarcity problem in the primary market, which is expected to get worse in the upcoming holiday season. In the company’s July survey, 31 per cent of respondents said access to exclusive products was a reason for buying pre-owned luxury items.

“Prices have gone up significantly across many of the watch brands in the last year due to scarcity,” says Kamdar. “But we still have hundreds of [Rolex] Submariners and Daytonas and Audemars Piguet Royal Oak blue dial watches that are so difficult to find. You’re still paying more than retail on many of these watches, but it’s still fair market value.”

Rising prices and limited supply are also making watches more attractive as an alternative investment. Indeed, a “significant proportion” of eBay’s UK watch listings are from vintage dealers, rather than private individuals, the company says.

Issues such as the constraints of Brexit legislation still need to be ironed out in the UK pre-owned market — eBay’s authenticity guarantee applies only to watches purchased on its UK site and delivered to the UK. 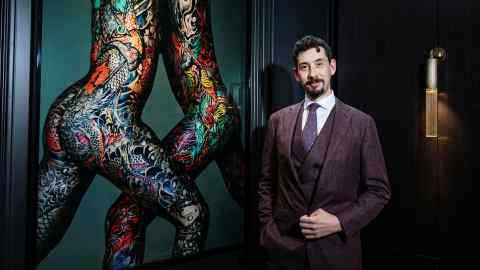 There is competition, too. Xupes, a British online luxury reseller, has partnered with German-owned Chrono24 to assist with sales abroad. Chrono24 and another German-owned business, Chronext, are among the more established specialists eBay is up against. Watch brands themselves want a slice of the pre-owned market, as well. Richemont purchased resale site Watchfinder in 2018, while MB&F offers a trade-in service and Ninety in London’s Mayfair is a dedicated store for Richard Mille’s certified pre-owned watches.

Kamdar sees the flurry of activity as “healthy”: primary and secondary markets are beginning to merge as watch collectors transact in a more circular way — buying from brands and reselling to upgrade.