Following one’s father into business is a well-trodden path but one the pursuer does not always welcome. In fact, rebellion at an early stage seems par for the course, as was the case for Krishna Choudhary, a 10th-generation jeweller whose ancestors supplied exquisite gems to India’s maharajas and noble families in the 18th century.

His father, Santi, still works from the family’s opulent ancestral home in the old city of Jaipur, where Choudhary grew up surrounded by 18th-century frescoes and sumptuous, museum-quality jewels and artefacts. Upon finishing school, however, Choudhary had only two business interests: pursuing either hospitality or the arts. “Whatever your parents say, you always want to do the opposite,” he says, echoing a sentiment that will be familiar to many.

After degrees in business and Islamic and Indian art history, it was a course at the Gemological Institute of America that was Choudhary’s turning point. While studying rubies, he came upon a magnificent 18th-century Mughal tray in one of his books. An identical set of two had been made, he read, one of which was sold at Christie’s and the other — Choudhary recognised immediately — was at his family home in Jaipur.

“My father used to bring it out when important, aristocratic families came to visit,” recalls Choudhary — adding that, on occasion, tea was even served using the tray. “After that, I started feeling more privileged and began to value everything much more.”

In 2019, he launched Santi, whose USP is to pair contemporary design with stones dating mostly back to the 17th to 19th centuries. Santi is based in London’s Mayfair, while its jewels are made in Paris and Milan, and often take months to create. Pieces start at $30,000 and have a modern-vintage Indian sensibility. Examples include punk-like Swan earrings set with unusual, oval-cut old-mine diamonds and dangling rare, natural saltwater Basra pearls, and Emerald Flower earrings, where two Golconda diamonds, totalling 9cts, are dressed in 16 paisley-shaped cabochon Panjshir emeralds.

Thanks to his family history, Choudhary has access to such historic stones and, when pitted against contemporary design, the pieces take on the style of artist jewellery, a growing niche that is attracting a new, younger type of collector, especially at auction. Max Fawcett, Christie’s head of jewellery in Geneva, has noticed “a huge uptick in the demand” for contemporary art jewels, adding that such designs have cross-collecting potential, attracting contemporary-art collectors and even later-impressionist and modern-art collectors.

Adding historic stones further increases collectability, by offering rarity, provenance and traceability. A good example are Golconda diamonds, which were mined hundreds of years ago from the famous, now-closed Indian mine. Golconda provenance is first rate: the mine produced some of the world’s most famous gems, including the Koh-i-Noor diamond, which forms part of the British Crown Jewels.

“Golconda history in diamonds is the crème de la crème de la crème of what people are looking for,” says Fawcett, who adds that they command double the prices at auction. Cue the 17.21ct, D Flawless Arcot II that Christie’s sold for £3.38m in 2019. Named after Muhammad Ali Wallajah, Nawab of Arcot (1717-95), the diamond has passed through some illustrious hands, including Queen Charlotte and George, Prince Regent. “If that was just a regular diamond, it’s worth $1.7m,” says Fawcett, adding that the closure of Golconda “has created a mysterious kind of allure around that part of India and the diamonds at the time”.

Choudhary often consults his father about the family’s historic stones but insists their clients are different. His father’s customers have been mainly old, European families, but Santi’s are a new generation of wealthy clients from Asia, the Middle East and Silicon Valley. Such collectors increasingly see jewellery as an investment, especially in the wake of the pandemic, says Tobias Kormind, a former banker and the managing director of 77 Diamonds, an online diamond jeweller. “Largely, these are owners of tech businesses which have been powering the work-from-home economy and whose valuations have gone through the roof,” he says.

“As we enter a growth phase and a potentially inflationary environment, high-quality diamonds and gemstones are attractive investment assets because they have a history of retaining their value over time, effectively preserving wealth and hedging against inflation.”

Santi’s clients may hail from different backgrounds but they share a common interest. “Every client has a connection to art and is curious about art — either they’re starting to collect or are bored with collecting,” says Choudhary. “They have this appreciation for the design and the historical part of the stones.”

Among the items Choudhary has sold during the pandemic are a 20ct old-mine emerald that dates back to the late 17th to early 18th century, which he paired with a modern, Art Deco-style baguette diamond setting; and a Golconda diamond design, which was bought by a Silicon Valley-based client. Both customers had seen the stones before the pandemic, and Choudhary says lockdown — and the extra time to study the stones’ provenance — was the main factor in the decisions to purchase.

With an appointment-only atelier in Mayfair and no retail presence, Santi relies on word of mouth. Education is part of the brand, as it was in his own career. “These stones have been travelling for so many years and they’re rare in their own right — with the carving, age, everything,” he says. “And they’re set in a beautiful design at the same time. I’m trying to connect the line to the past.” His father could not be happier. 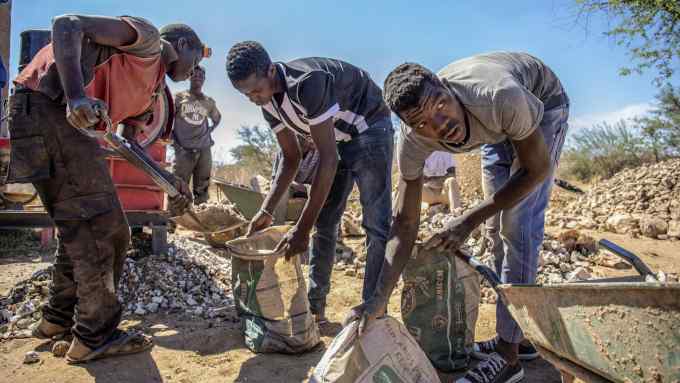