If you think the same, join us
UK immigration

When a lifeboat pulled into Dover Harbour on England’s southern coast earlier this month, the vessel’s crew showed practised efficiency in disembarking the migrants they had just rescued from the English Channel. While most of those on board were young men, babies’ cries also drifted across the harbour and several unaccompanied teenagers trudged wearily ashore.

Yet a series of incidents in recent months has raised questions about the treatment of such highly vulnerable asylum seekers.

A recent rise in small-boat crossings organised by smugglers has left unaccompanied children stuck for days in a processing centre designed to host them only for hours. Young migrants have also been sent to hotels instead of accommodation suited to their needs. Campaigners say this may have contributed to a worrying number of suicides involving young, unaccompanied asylum seekers.

Organisations working with refugees warn that, for many children arriving in Britain without their parents to claim asylum, the system’s flaws pose yet more uncertainty and risks for young, vulnerable people.

“Despite the best efforts of our staff and agencies on the ground, this government . . . has fallen short of its legal duty to provide the level of care the children are entitled to,” said Enver Solomon, chief executive of the Refugee Council.

The organisation holds a contract with the Home Office to provide a reception service for unaccompanied minors arriving at the Kent Intake Unit in Dover.

These failures are the latest to raise questions about the UK’s treatment of people arriving by small boat to seek asylum protection. The High Court in June ruled that conditions in the “squalid” former military Napier barracks in Folkestone were so poor it had been unlawful to house some migrants there.

The questions have taken on extra urgency because of the expected surge of asylum seekers from Afghanistan following the Taliban’s seizure of control over the country this month. Priti Patel, home secretary, on August 18 announced a plan to permit the resettlement of up to 20,000 Afghans fleeing persecution in the UK, with up to 5,000 in its first year.

The Home Office said it took the health and wellbeing of unaccompanied asylum-seeking children “incredibly seriously”.

Nearly 12,500 migrants have reached the UK in small boats this year, according to a tally kept by the Press Association. Those include 828 arrivals on August 21 — a daily record for the recent surge. However, overall asylum applications declined 24 per cent in the year to the end of March, to 26,903, as fewer migrants used alternative means of reaching the UK such as hiding in trucks.

“These aren’t unmanageable numbers,” said Bridget Chapman, of the Kent Refugee Action Network, which co-ordinates voluntary efforts to help migrants in the county.

However, campaigners point to a system under intense strain.

A meeting at the Da’aro Youth Project in Streatham, south London, illustrated the serious issues at stake. Benny Hunter, project co-ordinator, pointed to pictures on the wall to explain how the suicides of four teenagers within 16 months in 2018 and 2019 inspired the project. All had arrived in the UK as lone under-18 asylum seekers from Eritrea. The group caters for people who arrived as unaccompanied minors from Eritrea, Ethiopia and Somalia.

At least 11 teenagers who arrived in the UK as unaccompanied asylum-seeking minors have killed themselves in the past five years, according to Hunter.

“No one seems to be aware of how many of these young people have died,” Hunter said. “We’re trying to point out that this is an issue.”

The continued arrivals reflect the determination of families in some of the world’s most insecure regions to ensure at least one member reaches a safer country. Some hope the child will establish a foothold for a subsequent reunion application.

Nooralhaq Nasimi, founder of the London-based Afghanistan and Central Asian Association, said Afghans following such a route were attracted to the UK by its traditions of tolerance — as well as the prospect of a good job. Unaccompanied minors from Afghanistan made 359 asylum claims in the year to March.

“You have human rights as well as the employment opportunities — running a small business,” Nasimi said of the UK.

But the near-breakdown of support for such children was clear in Hythe, 12 miles west of the Kent port of Dover. One afternoon earlier this month, boys were sitting aimlessly in the bedrooms of the rundown Stade Court Hotel. The children have been accommodated there after Kent county council said in June that, with more than 400 unaccompanied under-18s to look after, it could accept no more unaccompanied migrants in foster care or children’s homes.

Two boys speaking through the windows at the Stade Court said they came from Iran. One said he was 17, while the other was 15.

The issues around the housing of refugees in hotels were highlighted on August 18 when a five-year-old boy recently arrived from Afghanistan fell to his death from a hotel in Sheffield, although it has been reported that the boy had arrived in the UK with his parents. 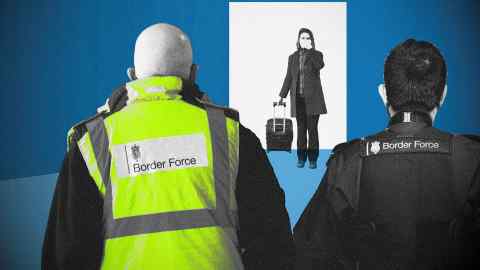 In June Patel altered the rules of the National Transfer Scheme, which is meant to spread the burden of caring for unaccompanied migrants, to try to address Kent’s concerns. However, she stopped short of making participation in the scheme mandatory for all authorities and, so far, only 240 children have been transferred away from Kent. The county has taken the first legal steps towards forcing the department to take more decisive action.

The Home Office said “additional temporary accommodation” was used to house children in “safe and secure accommodation” before placements could take place through the National Transfer Scheme.

“The Home Office continues to work with all local authorities as well as the Department for Education to ensure their needs are met,” the department said.

Yet, for the moment, voluntary groups said they were absorbing much of the pressure.

“Children are known to be more vulnerable,” Hunter said. “We’ve seen that the consequence of that is often young people suffering serious mental health issues or self-harming.”