Plant-based alternatives to comfort-food classics are big business. But which ones really deliver?

At present my dietary outlook looks like this. As a reducetarian, I consume meat but want to cut back for health and animal-welfare reasons. Being lactose-suspicious (rather than intolerant), I try to avoid dairy, except for creamy desserts, which I consider a professional hazard/perk. An open-minded carnivore, I don’t bat an eyelid about dining at a vegetarian or vegan restaurant because a meal can still satisfy me without meat (less so without wine, or at least an aperitif).

With this in mind, I’m always on the lookout for simple vegan recipes. Natalie Portman’s Instagram feed has become a fruitful source. A vegan since 2011, the Oscar-winner has been posting videos of herself cooking in her Montecito and Los Angeles kitchens. Some of her recipes are more involved but the one for roasted cauliflower is a breeze (you boil the head, cover it with avocado oil and salt, and bake). Another for sweet potato fries is basically the same but works particularly well as a way to incorporate plant-based food into children’s diets. “It sounds unhealthy,” Portman notes, “but is in fact healthy… in other words, perfect for kids.”

Vegan food doesn’t have to be as good as meat. It has to be better

There’s a belief that “meatless” vegan food (particularly fast food) is healthier than the meat equivalent, which isn’t always true. It depends on how processed the meat substitute is and the levels of saturated fat, among other factors. Nonetheless, even meat-eaters are increasingly seeking out non-meat alternatives. According to Meriel Armitage of Club Mexicana, the plant-based Mexican street food brand that recently opened an outlet in London’s Soho, non-vegans make up 70-80 per cent of her clientele. Their tastes are a key reference point. “Anyone who runs a vegan or vegetarian restaurant and tells you they don’t think about the comparison with meat restaurants or meat dishes is either not telling the truth or isn’t considering everything they should in how satisfied the customer is going to be,” she says.

“It’s not that I’m going, ‘How do I make this taste like meat?’” Armitage explains. “It’s about the experience. When you’re eating a meal you want it to deliver on certain aspects. For me, a Club Mexicana dish has to be bold in flavour and have zingy freshness. It’s got to look nice and deliver texturally. When you bite into things, you want that chewy texture like meat or fish. You want crunch, acidity, some creaminess or fat. It’s not that vegan food has to be as good as meat dishes; it has to be better.” Armitage has set the benchmark. Her tacos (jackfruit, seitan, tofu and soy) are astounding. I especially like the Baja Tofish taco with beer-battered tofish (of convincingly fishy consistency), slaw, pico de gallo, chipotle mayo and avocado.

My meat cravings tend to centre on burgers and fried chicken. And there are fantastic vegan options for both. One of my favourites is Halo Burger in Brixton and Shoreditch (also available from Deliveroo), which recalls McDonald’s circa 1987. The fries come in red-and-yellow cardboard cartons. The burgers consist of thin patties in white buns with diced onion, tomato, lettuce and pickles. There may be better burgers but these taste of my childhood.

For a homemade version, I recommend a recipe by cookery writer Anna Jones from A Modern Way to Eat (Fourth Estate). Distrustful of veggie burgers, she sought to create one that escapes any “nut-roast-at-brightly-painted-café-wearing-hemp-trousers” connotations. Her Really Hungry burger contains portobello mushrooms, thyme, cannellini beans, medjool dates, garlic, parsley, tahini, soy sauce, brown rice and lemon zest, and has a satisfying roundness of flavour and density.

For vegan fried chicken, I can’t rave enough about the crispy oyster mushrooms from street-food vendor Marli’s Kitchen (available for delivery in London, goodeats.io/marliskitchen). Not as juicy as chicken wings, they are still deliciously chewy with a spicy batter that drew groans of pleasure when I gobbled one after the other.

In anticipation of Boxing Day, when I always roast a ham, I also tried a recipe from Tom Hunt’s book Eating for Pleasure, People & Planet. “A swede pretending to be a ham” required studding a swede with cloves, roasting it for an hour and finishing with a mustard/sugar glaze. It wasn’t exactly ham but it did showcase many of the same flavours and was surprising tasty with sauerkraut in a bun.

For steak I don’t think any plant-based fillet lives up to the promise of a good T-bone. As for “facon”, I have tried a few varieties and come to the conclusion that, in a BLT with lots of mayonnaise, I can just about settle for This Isn’t Bacon. But why settle? I managed to get my hands on a cutting-edge version from Atlast (a spinoff of New York biotech company Ecovative) that is made from mycelium fibres (the filament-roots of mushrooms). The rashers looked like mummified banana skins, but they sizzled beautifully in the pan, crisped up nicely and had a lovely brittle snap. They tasted like bacon, too. Uncannily so. The product is currently only available in Honest Weight Food Co-op in Albany, upstate New York. But there are plans to widen distribution next year: one more reason, I suppose, for wanting 2020 to be over and 2021 to hurry along.

Explore the series
READ MOREBest FT Weekend long reads of 2021
We love animals — so why do we treat them so badly? 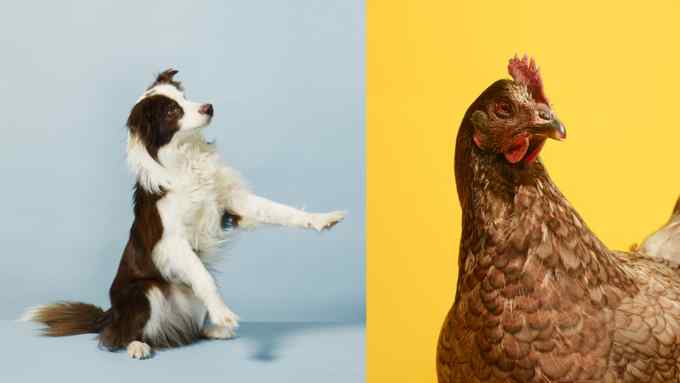