Tailoring was the story of the season in the French capital. Whether it’s square, soft, dropped or samurai, it’s time to show them some shoulder

Rare was the catwalk without a suit this season, where tailoring took centre stage. At Alexander McQueen, designer Sarah Burton was inspired by the warriors of ancient myth to create an embroidered brocade that was breath-taking and empowering, while the most feminine incarnation came via Comme des Garçons, where Rei Kawakubo had slashed the waist to allow for a pregnant stomach.

At Balenciaga it came in two options: with great big square shoulders that were “stuffed like a sofa”, according to the house’s designer Demna Gvasalia, or soft-shouldered, easy and effortless as a shirt. Gvasalia is “obsessed” with the shoulder, an area he decribes as the “definition of a silhouette.”

Likewise Clare Waight Keller, at Givenchy. For SS19 she had dropped the shoulder slightly forward, to flatten it to the body and narrow the line. She then made it more butch with extra layers of tonal suiting — and the effect was incredibly sharp.

Were the suits masculine or feminine or somewhere in between? At Celine, Hedi Slimane debuted a first collection that showcased a handful of suits in his signature lean silhouette. On the catwalk most of the tailoring was worn by men, but it will be sold in women’s sizes as well. John Galliano deconstructed the suit and gave it new proportions at Maison Margiela, but one of his most compelling offerings came in a silky, shiny black. Nicolas Ghesquière’s suits at Louis Vuitton were mannish, but worn by women.

Most suits came with trousers, but there were some skirts as well. Sacai’s Chitose Abe wove together a pefectly tailored blazer with a military cape and trench to create a hybrid suit, that looked as pretty as a dress. At Chanel, Karl Lagerfeld made a good case for the skirt suit in sorbet shades of tweed.

But if we were to pick the suit of the season, we’d have to look to Loewe. Jonathan Anderson’s beige ensemble had slouchy trousers and a contrast white lapel. Utterly lovely. 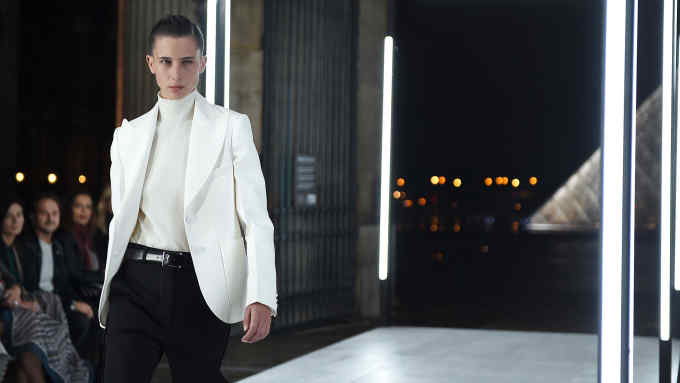