In the aftermath of the September 11 terror attacks, President George W Bush guaranteed that the US would pay $5.6bn for the production of vaccines and other countermeasures against bioterrorism.

That funding model, which led to the development of novel smallpox and anthrax prophylactics, will soon be deployed in the fight against Covid-19, as organisations including the World Bank and the Bill & Melinda Gates Foundation rush to underwrite the enormous costs of vaccine efforts.

But with more than 80 coronavirus vaccine candidates being developed around the globe, billions of dollars will have to be spent on preparing manufacturing facilities for several candidates, including some that will never make it to market.

“We’re making some fairly substantial investments even before having phase-one clinical trial results,” says Richard Hatchett, a veteran of the Bush and Obama administrations who now leads the Coalition for Epidemic Preparedness Innovations (Cepi).

Making investment decisions at such an early stage, adds the head of Cepi, which is co-ordinating funding for several international Covid-19 efforts, is fraught with financial risk.

Gavi, which raises funds from public and private donors for the rollout of vaccines worldwide, estimates that the bill for manufacturing hundreds of millions of doses of a single product will range from $50m for companies with existing facilities and trained personnel, to about $700m for those starting from scratch. This sum may be even higher if the vaccine requires novel technology platforms, and is on top of an estimated clinical development cost of at least $500m per vaccine candidate.

With several different vaccine technologies having advanced to human trials, choosing where to allocate limited funds is complicated, especially when policymakers are targeting a timeline of 12-18 months.

Large multinationals such as Johnson & Johnson say they have the capacity to scale up their existing process for mass-producing vaccines. This involves growing huge quantities of modified viruses within human cells in bioreactor vessels.

J&J’s Covid-19 vaccine candidate is based on a cold virus, disabled so it cannot replicate within humans, but still able to carry the DNA for an antigen — a distinctive protein — into the body, whose cells respond by making the antigen. In this case, the antigen is like the spike that studs the surface of the coronavirus; the hope is that this will produce an immune response that will protect a patient if they encounter coronavirus itself.

The US company has committed $500m to help produce a vaccine, in conjunction with a $500m investment from the government. J&J manufactures the disabled virus in a cell line that took 10 years of research and development to make highly productive, and its bioreactors can now make 300m vaccine doses a year.

Paul Stoffels, J&J’s chief scientific officer, says the company is scaling up its production capacity, and could ultimately make up to a billion Covid-19 vaccine doses a year.

However, J&J’s candidate is due to go into clinical trials only in September, while smaller companies specialising in so-called messenger RNA (mRNA) vaccines are already testing their prototypes on human volunteers in the US and Germany.

This newer method involves transcribing an element of the virus’s genetic code into a delivery system that carries it into the body’s cells. These respond by making a viral antigen that, as with the older approach, primes the immune system to respond to the actual virus. But this technique does not rely on cell lines and promises to cut production times significantly, although no mRNA vaccines have yet made it to market.

“If you have large reactors, with very big equipment to purify the products, you end up with very big, very expensive plants, which take a lot of time to build,” says Stéphane Bancel, chief executive of mRNA-vaccine maker Moderna.

The Boston-based biotech was the first US company to get a vaccine into clinical trials, at a record-breaking 42 days from the publication of the virus genome to the production of a first batch of vials.

It recently signed a deal with the US government worth up to $483m to expand its manufacturing to millions of doses a month by the end of this year and tens of millions a month next year.

Other companies are no less ambitious. BioNTech, a German company specialising in mRNA which began clinical trials this week, says it could produce hundreds of millions of doses of its vaccines at its on-site facilities.

Even so, technical challenges remain. In such vaccines, the mRNA is delivered in lipid nanoparticles — fat bubbles — and forcing the two together is a “complicated process”, Mr Bancel says.

The so-called “filling and finishing”, the last stage in vaccine development, in which the drug is formulated and put it into a vial or syringe, is where the bottlenecks are most likely to occur, according to Cepi.

For clinical trials, which require thousands of doses at most, that work is done by small, specialist companies.

Polymun, a family-owned firm with 90 employees, based near Vienna in Austria, is formulating the lipid nanoparticles for several Covid-19 clinical studies. It counts BioNTech and Imperial College London among its clients.

If any of those candidates progress beyond early trials, larger manufacturers will have to be found to produce what will be a new type of vaccine. The problem, says Aurelia Nguyen, who leads the vaccines and sustainability department at Gavi, is that “for candidates like mRNA and DNA, there is no playbook”.

Another consideration for vaccine candidates is the conditions in which they must be stored before use.

Inovio Pharmaceuticals, a company based in Pennsylvania which is in early-stage clinical trials for its vaccine based on DNA, says its product can survive a year at room temperature — making it easier to transport in countries where refrigeration is a problem.

“This is a huge advantage over conventional vaccines and even formulated RNA,” said Joseph Kim, Inovio’s chief executive.

But the vaccine can only be administered with a smart device that looks like an electric toothbrush and delivers an electrical pulse to open pores in cells, allowing the DNA to enter.

In Germany, “it’s not difficult to get people to have the right education, the right training at university,” says Rolf Hoemke, of the German Association of Research-Based Pharmaceutical Companies. “What is really in short supply is experienced heads of production.”

Cepi’s Dr Hatchett says time constraints mean most coronavirus vaccine manufacturing will have to be done at existing sites. He adds an important concern is that efforts to stem this pandemic do not come at the expense of other vital projects.

“What we don’t want to do,” he warns, “is find ourselves in the position of having to contemplate stopping manufacturing the measles vaccine in order to manufacture a Covid vaccine.”

This article has been amended since first publication to reflect the fact that Gavi’s mission is to increase access to vaccines, rather than to fund their development 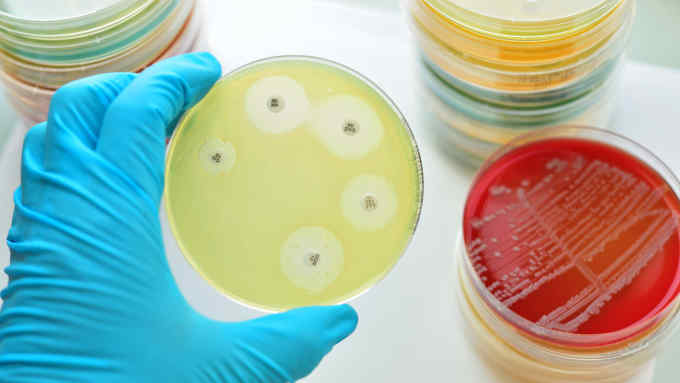 As researchers race to develop a coronavirus vaccine, we look at efforts to ensure that the world’s poor are not left behind — and ask whether the pandemic will jolt policymakers into confronting the looming threat from antimicrobial resistance