As schools scramble to embrace sustainability, rankings providers are trying to evaluate their efforts

These days, there is no shortage of advocates for “kinder and greener” MBAs. Many campaigners now criticise business school rankings for focusing on graduates’ salaries rather than the tools and values needed for a more responsible form of capitalism.

But, while a growing number of institutions are launching sustainability courses, institutes and other initiatives, progress in assessing their extent and effect lags behind. Most reporting remains descriptive, anecdotal and difficult to measure. As the table below shows, efforts to track progress more rigorously are nonetheless under way. They offer some indications of the business schools that are doing more according to a range of data points.

The FT’s business school rankings, like some others, have long assessed factors such as gender and international diversity among students, faculty and leadership. More recently, they have sought to track the extent to which environmental, social and governance (ESG) factors are integrated into teaching.

In compiling the table, the FT’s researchers took as a starting point ESG in teaching in the 2021 FT Global MBA rankings. Participating schools are accredited by a leading agency (the Association to Advance Collegiate Schools of Business or Equis), have classes of a certain minimum size and agree to share data. Iese in Spain, Edhec in France and Darden in the US all performed strongly. The researchers then compared the FT’s performance measures with data produced by other emerging benchmarks. The variations are significant.

There is no attempt to provide an overall ranking: the methodologies vary, data are imperfect and the timeframes and breadth of analysis (sometimes business schools; at other times their wider university) are not directly comparable. Instead, schools are listed in alphabetical order. The FT asked whether they had target dates to become net carbon-neutral. While business schools may not be significant CO2 producers in their own right, and some have inherited older buildings that are less efficient, those with targets demonstrate a commitment to tackling climate change and set an example to students and faculty.

Darden achieved net zero emissions in 2018, helped by an innovative partnership with a local solar power station. A further 12 schools aim to reach the goal by 2030, including six within the next three years. Several have targets as far off as 2050, or even 2060 in the case of Miami Herbert Business School, while seven have disclosed no target at all. Many focus only on Scope 1 and 2 emissions (respectively those directly produced by the school and those arising from the energy it buys) or on those plus some parts of Scope 3 emissions (which cover all other parts of the value chain, including travel).

A second way to assess business schools’ societal impact is through their research output. Wilfred Mijnhardt, policy director at Rotterdam School of Management (RSM), studied the proportion of papers published by academics in top schools between 2018 and 2021 that addressed topics in the UN’s Sustainable Development Goals (SDGs). By this measure, Edinburgh, Melbourne and Esade all score highly.

A more holistic assessment comes from Corporate Knights, a Canadian publisher, which produces an annual Better World MBA ranking based on factors such as the integration of sustainability into core courses, research and specialist institutes and centres, as well as faculty gender and racial diversity. Its most recent edition places Australia’s Griffith Business School top, followed by Maastricht University’s School of Business and Economics in the Netherlands, though neither make it on to the FT list. Others that score well but are on the FT list include Warwick, Durham and Edinburgh in the UK, along with St Gallen.

The Positive Impact Rating for business schools published its second rating in 2021 based on 8,800 student assessments of factors including culture, governance, learning methods and public engagement. It gives four stars to Fordham and Grenoble Ecole de Management in France, as well as Esade in Spain.

Times Higher Education also runs an impact ranking for universities, using data such as research, operations and teaching benchmarked against the SDGs. Assuming business schools rate in line with their parent institutions, some of the best are Alliance Manchester and Leeds in the UK and Melbourne and Monash in Australia.

Finally, the heavily US-focused Sustainability Tracking, Assessment & Rating System (Stars) — produced by the Association for the Advancement of Sustainability in Higher Education, which also judges universities overall — gives its highest “platinum” rating to Cornell, Berkeley and the University of Connecticut, each of which has a business school.

Despite the differing assessment methodologies, the trends and links provide prospective students, employers and faculty alike with a rich range of benchmarks — and business schools with plenty of room for improvement. 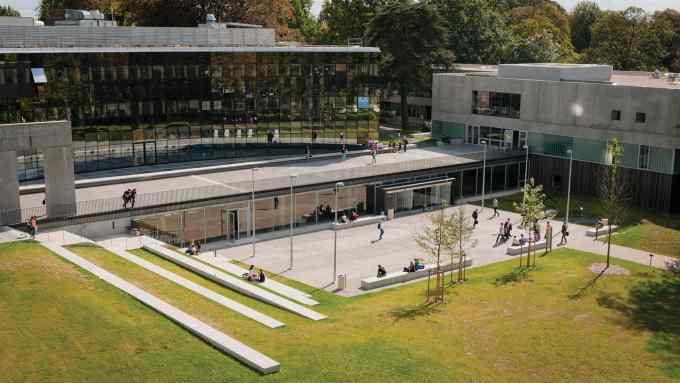