Why English wine is more beauty than beast

There was a time, not that long ago, when the search for a good English wine meant kissing a lot of frogs. But at this year’s WineGB Awards judging it was a different story – there were far more beauties than beasts.

Sparkling wine – which accounts for two-thirds of Britain’s production – was the strongest category, with some entries that really were world-class. Just as interesting, though, was the sheer variety of wines on show; we tasted heavyweight luxury cuvées, luminous blanc de blancs, Burgundian Pinot Noirs; skin contact wines, pét-nats, Chardonnays, Ortegas and pale-pink rosés.

“Because Britain is not historically a wine-growing region we’re not bound by as many regulations,” says awards co-chair Susie Barrie MW. “As a result there are so many people now trying fun and interesting stuff.”

This was a year when still wines, in particular, showed a major step up in quality. The upscale Kent winery Gusbourne confirmed its reputation as a maker of impressive Burgundy-style Pinot Noir and Chardonnay by winning the Best Still Wine trophy. Another trophy winner, Kit’s Coty Bacchus 2019 from Kent’s Chapel Down, proved that Bacchus – a cheery grape variety reminiscent of Sauvignon Blanc – can have a more serious side.

Essex has also lately emerged as a hotspot for still wines. The gold-medal-winning Painter of Light Chardonnay 2020 by London’s urban winery Blackbook was made with fruit from Latchingdon. Crouch Valley’s Danbury Ridge, while not in the competition, has also won acclaim for its velvety Pinot Noir. “I wouldn’t be surprised if Essex eventually proves to be England’s Côte d’Or,” says the influential consultant winemaker, and outgoing head winemaker at Hattingley Valley, Emma Rice.

In the sparkling wine categories smaller and newer names carried off top awards. The Classic Cuvée NV Trophy was won by the Brut Reserve No 6 from Harrow & Hope, a family-run domaine in Buckinghamshire’s Chiltern Hills – an achievement even more impressive when you consider this vineyard will be certified organic by June 2023.

The title of Supreme Champion went to Sussex vineyard Artelium, a relative newcomer that has worked with a roster of guest winemakers. Best in show was its statuesque Blanc de Blancs 2015 by Dermot Sugrue – a traditional-method fizz with the grandeur of a prestige cuvée and the gasp-inducing freshness of an oyster. “The blanc de blancs were particularly outstanding this year,” says Awards co-chair Oz Clarke. “Especially the ones that had a bit of age on them, which added nutty, creamy depth.”

Not everyone in Britain, however, is making wines in the image of champagne. Sussex renegade Tillingham and Kent’s Westwell Wines, for example, owe more to the low-intervention traditions of central and eastern Europe – ageing in amphorae, fermenting with wild yeasts, making orange wines and pét-nats. Westwell’s MD/winemaker Adrian Pike co-founded the record label Moshi Moshi – and that indie spirit carries over into Westwell’s labels that feature hand-drawn illustrations that could adorn a record sleeve.

Ninety-eight per cent of Britain’s 879 vineyards (and the vast majority of its 195 wineries) are in England – principally in the south and south-east. Is such a thing as a recognisably “English” style emerging? 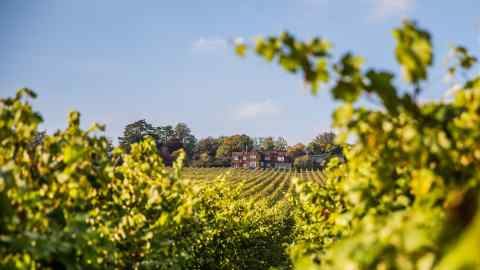 “Our cool climate means that even when we obtain good ripeness, we maintain fantastic acidity,” says Emma Rice, “and that’s something that many growers in Champagne and Burgundy are now struggling with [because of climate change]. As long as it’s carefully managed, that acidity can give a wine fineness, linearity, elegance and great purity of fruit. It makes it vibrant and mouthwatering – and makes you want to drink another glass.”

“English wine is at a really exciting juncture – the quality has never been higher,” agrees Seamus Sharkey, former head sommelier at The Ledbury and the man responsible for the English wine list at The George in Fitzrovia, which is one of the best in the country. “We have wines from Dorset to Kent to Leicestershire; a mix of well-established producers and newcomers who are making wine with brilliant energy and potential.”

English vintages are always a nail-biter, but at the time of going to press, 2022 was looking great: “It’s tracking to be as good as 2018, which was a sensational year,” says Gusbourne’s Charlie Holland.

If you haven’t made a foray into English wine yet, then start your journey here with our selection of six bottles for HTSI Curates.