Prices are rising, which means investors should understand the risks

It is a good time to speak to Paul Roberts, chief operating officer of famed Napa Valley winery Colgin Cellars, about climate change. “It’s raining! First time in 200 days,” he says, delighted. What he does not know is that a “bomb” cyclone will soon follow, causing localised flooding. It sums up the weather challenges for Californian winemakers this year and, frankly, most years.

All winemakers understand the risks that global warming bring to their crops and wines. But some longstanding investors in fine wine are still sanguine, which prompts the question of whether they really understand the risks. Perhaps they should review their stock of wines more intently. The most prestigious wines from California, France and Italy already have substantial scarcity value, costing hundreds, even thousands, of pounds a bottle.

Now, these prices are rising steadily, but how much this is because of climate change and how much is a function of demand exceeding supply, no one can know for sure. Even so, those new to investment in fine wines have begun to ask what it all means.

At wine merchant Bordeaux Index, head of investment Matthew O’Connell increasingly has to field questions about climate change from wealthy collectors, though mainly from the less experienced ones. “We are finding, in particular in discussions with new investors in the space, that it will be in their top five or 10 questions, something that simply wasn’t the case just a couple of years ago.”

His team forecasts shortages of supply will not become apparent for at least another decade. Besides, many of the merchant’s clients are only familiar with more recent vintages and are unlikely to have noticed changes over time.

“The market outperformance of young vintages versus older vintages in Bordeaux supports this,” says O’Connell.

Drought and heavy rain are common occupational hazards for most winemakers. Last year, however, Napa Valley suffered a calamity that threatened the region’s wine community — not just the wildfires that destroyed buildings but something even worse: the resulting smoke. 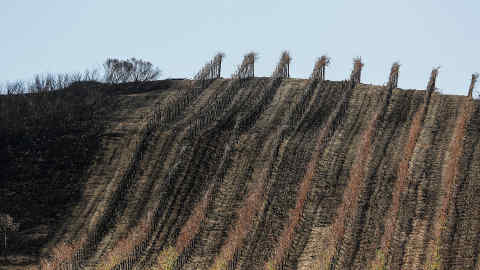 Winemakers in the northern California region, known for its highly valued red wines, faced ruin. While direct heat was a threat, taint from smoke particles was the big concern. These can float in the air long after a fire has passed. Worse, smoke can result in a variety of odd flavours caused by the atmospheric residues.

Views on what to do with any tainted wines varied, says Alder Yarrow, writer of wine blog Vinography. Some winemakers remained in denial, perceiving no lasting effects. Others took a wait-and-see approach. Those making the priciest wines had to make some tough choices. After testing, Colgin Cellars, whose wines sell from about £300 a bottle, realised that its 2020 vintage would not be fit for its discerning customers and therefore decided not to release it. Roberts preferred to risk finances than reputation.

Climate change has forced all makers of fine wines to adapt. Growing techniques have changed to deal with the added heat and untimely spring frosts. Managing the vine canopies produces more leaf shade to protect the grapes. More careful pruning of the vines helps achieve the best grape harvests possible. But, at the same time, the organic and biodynamic farming methods introduced throughout the world in recent decades do not always cope well with problems such as mould. In that sense, the methods are more costly, meaning less financially strong winemakers might struggle to maintain them as weather patterns become more variable.

Wildfires are only one manifestation of global warming. Warmer summers and longer growing seasons can force vineyards to pick their grapes early — a so-called green harvest. Unusual weather events, such as frosts in spring or hailstorms in summer, keep the vignerons on their toes in France. Chronic drought conditions force Italian fine wine makers to create new clones of grape varieties, as well as manage their vines, to cope with declining rainfall each year.

At Antinori, a producer of “super Tuscans” such as Tignanello and Solaia, the battle with climate change grinds on. As in much of Italy, heat and drought make the work harder, says chief executive Renzo Cotarella. Canopy management has helped protect the Sangiovese, Cabernet Sauvignon and Cabernet Franc grapes used in both wines — the latter two respond reasonably well to heat. “Of course, 20, 30 years ago it was much easier,” says Cotarella. Then again, he thinks Antinori’s quality has improved.

Champagne makers, too, face a climate challenge. “At Bollinger, the yield has dropped 10-15 per cent over the past decade, for sure,” says Etienne Bizot, chair and chief executive of its holding company, SJB. Unlike some of its peers, such as Taittinger and Pommery, which have bought acreage in recent years in England and elsewhere, Bollinger had held to its French roots. But, in April, SJB bought Ponzi Vineyards of Oregon, one of the first to grow Pinot Noir and Chardonnay in the Willamette Valley.

The top-tier producers benefit from growing high-quality grapes on well-sited soils. But terroir does not trump credibility with well-heeled buyers, who expect high prices to reflect consistent quality.

No maker, even those in great demand, can afford any complacency. High prices for the finest bottles do not mean wealthy oenophiles will pay up for everything. O’Connell at Bordeaux Index questions the high values that some lesser burgundy makers, however good, have achieved in recent years. Even in 2019 — a relatively poor vintage for the region — all of them rose in price.

Worse, Yarrow has begun to notice more discounting of highly rated Californian wines — via hidden labels — by US online retailers such as Last Bottle. He sees these “surprise” bottles as a way of offloading excess stock.

Regardless of climate concerns, however valid, there is no clear evidence that the fine wine market has suffered. Though hotter weather and longer growing seasons have an effect on the ripeness of flavours and, crucially, can lift alcohol percentages, critics have not complained much.

Scores for some of Bordeaux’s top wines have not fallen. Consider those from the closely followed critic, Neal Martin at Vinous. His average scores for prestigious first-growth Mouton Rothschild have averaged about 95 and have varied little since 2006, according to data from wine exchange Liv-ex and Vinous.

However, confidence in the investment and technical skill of leading producers may be insufficient for some. One service, Saturnalia, offers something different. Starting with France, its reports correlate a variety of weather factors in a given growing season with the scores of critics. In this way, says Daniele De Vecchi, one of the project’s founders, Saturnalia can give collectors of the finest Bordeaux wines a preview of the weather’s effect on quality, without tasting a drop (2021 looks like a tricky vintage).

One interesting result from De Vecchi’s long-term climate change research might seem counterintuitive. Despite the distinct warming trend since 1975, rainfall in the Bordeaux region has been rising rather than decreasing in recent decades. De Vecchi predicts more frequent heavy rain events could have a negative effect, longer term, on the quality of the region’s grapes.

In Bordeaux’s Pomerol area, Fiona Morrison, co-owner of Château Le Pin, believes the critics’ consistent scoring indicates approval of how the leading winemakers have dealt with climate change. A producer of Merlot-based wines — a grape that has exhibited higher alcohol levels in the past decade — Morrison understandably feels the issue is exaggerated. Though she prefers less alcoholic wines, she cannot begrudge those elsewhere, in the US and Asia especially, who prefer richer-tasting wines with a higher alcohol content.

Climate change has brought some gains, believes Morrison. “Gone are the herbaceous green flavours of unripe Cabernet Sauvignon, and that’s a plus,” she says. “Wines are drinking earlier, but that doesn’t mean they will not age well in 20 to 30 years.” She remembers tasting and enjoying a 1947 Cheval Blanc, a top Saint-Emilion that includes Merlot. Later, she found out that it had a relatively high alcohol content of 15 per cent, but no one at the table had complained, she says.

Most fine wine collectors will invest in temperature-controlled storage for their precious bottles, either at home or, as is often the case in the UK, with bonded storage companies. As bigger volumes of fine wine are traded across the world, provenance will also be an increasingly important consideration for collectors, including how wine has been transported and how bottles were kept originally.

Wine-storage companies, such as Octavian in the UK, say that clients are requesting photographic records of wines in storage more frequently. But some investors want even more certainty. Pierre-Henri Flamand, CIO emeritus at investment manager ManGLG, wanted to ensure his children could enjoy his favourite wines from decades past in the best possible condition, with all the flavours he appreciates today. 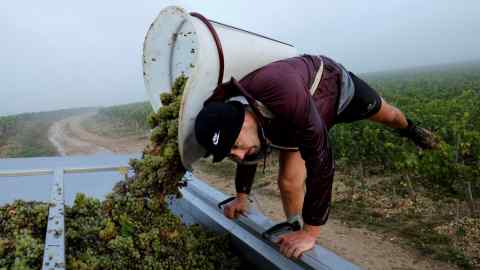 He turned to a premium service, 1275 Fine Wine Collections. It ensures that wines, bought directly from the estates, have been transported by suitable methods, rather than shuttled in non-temperature-controlled vans to then sit on container ships, perhaps for days or more. The company’s head of strategy, Erik Portanger, predicts demand will increase from collectors for such end-to-end fine wine transactions, including temperature-controlled transport and storage.

Climate change may not immediately affect the supply of the finest wines, but it could alter their taste and texture. Yet, if wine critics and buyers are concerned, one would not know it. As Morrison says: “The market decides in the end. Prices are telling.” With Le Pin trading at an average of £2,800 a bottle and rising, she may have a point.