Remarry by all means — but don’t forget the pre-nup

Many of us associate romantic love with our youth. But a growing number find the flames of passion kindled in later life.

Around a quarter of a million couples wed each year in England and Wales. Perhaps because we are living so much longer, later-life marriage is on the increase. At the last count, one in six men marrying were over 50.

That means the likelihood of marrying for a second time is increasing. Around one in four men marrying are divorced, and in about one in seven marriages both partners are divorced.

Research suggests lockdown has dampened the ardour of many couples, testing their compatibility. For the married, that could mean more divorces. For the unwed it might lead to a dropping of wedding plans and a decline in marriage numbers in the coming year.

I don’t want heartlessly to extinguish any embers, but if you are defying the odds to give marriage a second go, you may wish to consider a few practical financial planning issues before you start looking up diamond engagement rings online.

Whenever one partner brings significantly more wealth than the other to a relationship it introduces some vulnerability. Just remember Hollywood star Zsa Zsa Gábor’s boast: “I am a marvellous housekeeper — every time I leave a man I keep his house.”

Both sexes can fall prey to opportunistic partners in marriage, and wealth disparity can also be an issue in same-sex marriages and civil partnerships. A prenuptial agreement — or pre-nup — is advisable, whether marrying for the first time or, as in Zsa Zsa’s case, the ninth.

For pre-nups to be valid they cannot be signed under duress. They need to be fair, contractually valid and signed at least a month before a wedding — and both parties should have independent legal advice.

The aim is that any assets within the pre-nup are ringfenced in the event of divorce. One drawback with the pre-nup is that you cannot then benefit from the potential marriage-related tax perks of sharing the assets that it covers between the parties.

I have one client who, after being happily remarried for five years, is now passing some of the assets listed in the pre-nup to his wife to exploit their combined dividend allowances, annual allowances and capital gains tax allowances. These assets will no longer be ringfenced in the event of divorce.

Charles Calkin
You’re wealthy — should you marry in secret? 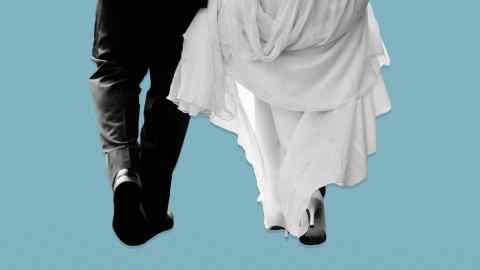 When you remarry you will need to write a new will, as your old one will automatically become void. Better to rewrite your will as soon as you separate. I had one client who didn’t and who died suddenly. Everything went to his estranged wife, who gratefully accepted the lot, leaving his second partner, with whom he had been living for some years, with just one keepsake — their dog.

Where there are children from earlier marriages there are usually extra complications. I had another client who married a second time. On his death all his assets went to his new wife. His adult children were forced to buy treasured family heirlooms from her.

There are a number of things you might consider to mitigate the risks. The first is simply to keep your finances entirely separate — I have known couples remarrying in their 80s and 90s who have done this. Perhaps it is easier when you are older.

Alternatively, each partner may ringfence the assets they bring to the second marriage to preserve their children’s inheritance. However, this can cause problems for the remaining partner on the death of the first. For example, you can move into a shared home with your new partner and then when they die find their adult children asking you to vacate the premises so they can claim their inheritance.

One way around this is to create an Immediate Post Death Interest trust within the will. This might allow your new spouse to remain in the family home, with all your possessions and a stipulated amount of money or investments. A good lawyer will ensure that the surviving partner is not penalised should they want to downsize at some point. On the second death the first partner’s assets then go to his or her children.

Alternatively, consider taking out a life insurance policy in trust for your children so that as soon as you die they get cash and your partner feels no pressure. What happens to the house and items within it on his or her death is then less pressing.

If you are moving in with a new partner and you have your own home do not be too easily tempted to sell it and immediately give the proceeds to your children without ensuring you will have a home if left alone in the future.

Ultimately, you may find there are stronger reasons for simply living together, without entering into a marriage. If you are in receipt of a widow’s or widower’s pension you may find you lose it if you remarry. And those who received a title that recognised the achievements of their deceased spouse, which might be lost on remarriage, may prefer to keep things as they are.

These issues aside, with good advice and careful planning it is possible to mitigate many of the financial complications that can come from remarrying.

I hope that if you do, you’ll find new happiness — and not just because of the tax perks that marriage or civil partnership can bring.