Future factories: smart, connected but still with a human touch

Equipment will be run by AI and machine learning, increasing the need for data scientists and engineers

The Caojing chemical works near Shanghai is a labyrinth of pipes, gantries and storage tanks. It may not seem like an obvious site for digital experimentation, but it is set to host a trial in applied artificial intelligence.

After a successful pilot in Europe, German plastics group Covestro is implementing an advanced system at the complex. Its software uses machine learning to recognise patterns and deviations in how an engine runs. These insights enable it to predict equipment failure up to eight months in advance, so avoiding unscheduled downtime.

“The biggest problem with operations is that something breaks with no warning and you end up having to have emergency call-outs [and to] shut down a unit,” says Jane Arnold, head of global process control technology at Covestro. “If you can learn ahead of time, you can schedule properly.”

The initiative, which Covestro intends to roll out globally, shows how new computing ability, sensors and hardware are opening the door for “connected factories”. In these facilities, machines will “talk” to each other by transferring data wirelessly. Their intelligent software can learn from experience and make decisions — it can even operate autonomously.

Technology evangelists call this “Industry 4.0”, an essential strand of what is being called the fourth industrial revolution. Industry 4.0 promises a change in how products are designed, made and consumed — as well as the role of humans in production.

Whether it involves robotics or 3D printing, the goal is to improve quality, precision and efficiency in manufacturing while responding to demand and reducing costs.

The possible increase in productivity is being likened to that which followed the advent of the steam engine, with a potential value of $3.7tn for manufacturers and suppliers in 2025, according to a study by McKinsey, the consultants.

For Daniel Küpper, managing director at Boston Consulting Group, there are three stages on the path to a fully connected factory.

The first stage links equipment to gather data from the shop floor. The next uses this information to forecast demand patterns and organise activities. One example of this is “predictive maintenance” as carried out by Kone, the Finnish elevator maker, which monitors its lifts remotely and dispatches engineers before a breakdown.

The final and most difficult stage is to connect the various digital projects in a plant and its supply chain.

Already there are “lights-off” factories where a human presence is not required. At electronics manufacturer Foxconn’s plant in Shenzhen, China, manufacturing is fully automated — machine learning and AI run and maintain equipment, and monitor production.

For some, the future goal is to connect with suppliers’ and customers’ systems to anticipate demand and automatically adjust production. This would create seamless manufacturing and include benefits such as machines changing production schedules to use energy when it is cheaper or when renewable power sources are available.

One challenge to achieving this vision is that while many industrial companies are at stage two (forecasting demand), several have come unstuck, says Mr Küpper. This is because they have yet to see the benefits of their changes.

“Many of them have implemented isolated-use cases and haven’t made the required process-related changes,” says Mr Küpper.

Indeed, “the adoption of technology in production still remains slow across industries and regions,” according to a report by the World Economic Forum and McKinsey in 2018.

A survey it cited found that only 29 per cent of industrial companies had started to roll out new technology across production processes. Many (41 per cent) were still testing projects at a single site, and the remaining 30 per cent were yet to “start the journey”.

Protolabs, a manufacturer that produces rapid prototypes, successfully uses a “digital thread” in its processes. Customers upload a 3D design of their product and receive an interactive quote, which allows them to change materials and quantity. Protolabs can trace an order’s progress through its systems and monitor the use of its equipment.

“It means we have a feedback loop and push data through our design cluster, through to [manufacturing] operations and shipping,” says Stephen Dyson, head of Industry 4.0 at Protolabs.

Mr Dyson says that retrofitting older plants is not necessarily a barrier, rather adoption is held back by the challenge of investing in the right technology.

Despite fears about the destruction of employment, many businesses say that a lack of skills is holding back digitisation. Some manual jobs will probably disappear by 2050 but more technicians, data scientists and engineers will be needed.

At Covestro’s plant in China, Ms Arnold is sceptical that AI will completely run chemical installations in the near future. She believes that marginal gains for production from digital projects will have an outsize effect when rolled out at scale.

“If we can reduce unplanned outages by say 1 or 2 per cent, that’s a significant saving long-term. If you start at 90 per cent on-stream time and change that to 92 per cent, that’s a big step-change in the amount of production and ultimately sales.” 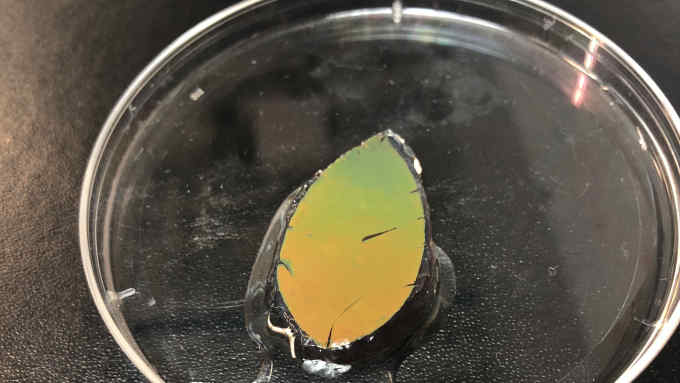