Fancy a bottle at Planque?

A first look at an ambitious new wine bar, restaurant and members’ club in east London

The east London district of Haggerston is at the sharp end of food and fashion. Fine wine is not something that leaps to mind when you emerge from its scruffy station – but that may be about to change with the arrival of Planque, a self-styled “wine clubhouse” that opens under its railway arches later this month. Part wine bar, part restaurant, part members’ cellar and club, this stylish drinking hole is aimed at a generation of wine lovers that rarely sets foot in St James’s.

“I know a lot of people my age who are now on the cusp of buying more wine than they actually drink,” says Planque’s 39-year-old founder Jonathan Alphandery, an avid wine collector with a taste for low-intervention producers from France and Italy. “And having spent the past decade drinking in wine bars all over the world I thought there was a real opportunity to create a place in London where they could cellar their wine and enjoy it, without all the stuffiness that normally goes with that.”

Alphandery’s name won’t be familiar to many on the London food scene – the bomber jacket-wearing Parisian spent a number of years in Sydney where he worked as director of Ladurée Australia before moving to the UK with his wife Bianca, an art director, two years ago. But the credentials of his team are impeccable: chef Seb Myers (P Franco, Chiltern Firehouse) will be running the kitchen, sommelier James Lewis (Lyle’s) will be overseeing the wine, and another sommelier, Sarah Papadimitriou (The Laughing Heart, Mãos), will run the club.

The vaulted space Planque occupies used to be a garage; its polished concrete floor, exposed brickwork and modernist furniture by Denmark’s Studio X feel fresh and modern. And everything about the open-plan layout is designed to encourage conviviality. The focal point of the restaurant is a 10m-long oak table with seating for 16. In the lounge-y members’ area, an ultramarine alcove, there is also a table for eight. “We really hope the wine will help start conversations,” says Alphandery. “My dream would be that people may sit on the couch, open a bottle – or a magnum! – and end up sharing it with other people sitting nearby.”

My dream would be that people may sit on the couch, open a bottle and end up sharing it with other people sitting nearby”

Planque membership is £80 a month, or £880 a year – a price that includes cellaring for 72 bottles, plus access to the lounge, winemaker dinners, tastings and buying advice. Members can drink two bottles of wine from their cellar for free per month, after which corkage is £10 a bottle. Members and non-members alike can also choose from a Francophile wine list featuring many cult bottles from Alphandery’s own cellar. “The Jura is particularly close to my heart, so we’ll have wines from amazing producers like Jean-François Ganevat,” he says. “I also love the Savoie, Beaujolais growers like Guy Breton, and grower champagnes such as Cédric Bouchard’s Roses de Jeanne and Aurélien Lurquin.” In a move some may see as heresy, Planque will list “very little” Burgundy and no Bordeaux at all: “It’s not good young and most people can’t afford the good stuff.” There will, however, be some fancy old Barolos from the likes of Cappellano.

Myers’s menu will be “modern French”. On Saturdays Planque will offer a prix-fixe menu topped off by indulgent puds: brown butter parfait and whisky meringue and sticky, rum-soaked canelés. It will also have a small retail area for tipsy shopping. “Growing up in Paris, I was very influenced by Colette [a well-known fashion and lifestyle boutique in the Rue Saint-Honoré] – the way they curated everything was spot-on,” he says. “And I still really like that essentialist approach: one really great corkscrew, one fantastic olive oil. We’ll have chocolate from Garçoa in Zurich and some impulse buys like toys from Yuki & Daughters in Brooklyn.” 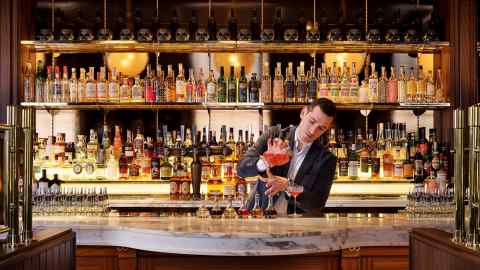 As Noble Rot and Top Cuvée have proved, London is in the mood for wine bars with a spirit of punk-y irreverence. So Planque may have come at just the right time.