Accept & continue
Manage cookies
How To Spend It Style

In 1957, Robert Goossens, a young Parisian goldsmith with an atelier in the Marais, was stunned to be summoned to meet with Gabrielle Chanel. They had only known each other peripherally until that point: Goossens had been contracted by Maison Degorce to make couture jewels for Chanel since 1953, and he had also worked in ateliers producing jewels and objects for Cartier. Goossens had a knack for translating the fantasy of fashion jewels into fine goldsmithing – and vice versa – and it was surely this spark of creativity that caught the eye of Chanel. In that meeting, she asked Goossens to work with her on both her personal jewels and the jewellery for the maison. Together, they developed a rich, romantic signature style: gilt metal, studded with coloured glass or pâte de verre, and the mingling of real and faux stones. They also broke the traditional rules of jewellery making, prioritising beauty and craftsmanship over intrinsic value, and creating a new genre of couture jewels, poised between precious jewellery, fashion and art.

Since 1978, that genre has been perpetuated and enriched by Patrick Goossens, the late founder’s son, the director of heritage and savoir-faire at the Paris maison. While the atelier – now part of Chanel’s Paraffection stable of métiers d’arts workshops – still creates couture and catwalk pieces for other fashion houses, the focus has shifted in recent years towards expanding its own in-house lines of jewels and homeware. “We’re leveraging our rich heritage to create our own line as a tribute to my father,” says Goossens, from his home in Normandy. “We are at the frontier between costume jewellery and fine jewellery. We present an entirely original value proposition, jewels made by artist-goldsmiths, in gold-plated metal and semi-precious stones or glass, that are heirlooms to be passed down through generations.”

As part of this expansion, Goossens opened an interior-design store in the Rue Cambon late last year, and is poised to open the doors of its first London boutique, on Burlington Gardens, this month. The minimal, white and marble space will house Goossens’ spring/summer ’21 collection, which expands the house’s Talisman collection with an enticing treasury of jewelled pieces inspired by poppies. There are hoop earrings clustered all around with lush blossoms, a cuff bracelet engraved with flowers, a Merovingian-inspired rock-crystal-studded medallion, and the brand’s signature stackable necklaces and bracelets. Interestingly, the price of a Goossens piece is significantly less than most of the jewels you’ll find at Mayfair’s neighbouring stores – rings range from £190 to £590, while a Cabochon two-pendant earring costs £249.

Alongside Goossens’ own creations, the maison will also present its collaboration with artist-jeweller Harumi Klossowska de Rola, with whom the brand has been working for the past three years. A like-minded free spirit, and the daughter of artist Balthus, Klossowska de Rola likes to cross boundaries, mix disciplines and challenge preconceptions of what jewels should be. Her first Goossens x Harumi collection took the world of plants as a theme. The current collection, her second, focuses on the animal world. Specifically she has drawn on two creatures: the serpent – a symbol of regeneration and a Klossowska de Rola favourite – and the lion, Chanel’s birth sign and a fascination of Goossens and Klossowska de Rola. A sculpted lion-head ring in 24-carat gilded brass is given a pearl-scattered mane, while slithering snakes are twisted into heart-shaped hoop earrings. It’s a collection that weaves together Goossens’ unique relationship with the storied Paris fashion house, as well as developing the narrative to incorporate a new creative vision. “Harumi has a strong and unique point of view, she understands so well the universe of Chanel,” says Goossens. “And both of us are inspired by our fathers.”

How To Spend It
The radical reinvention of the Chanel jacket 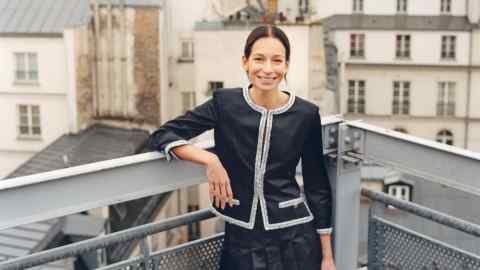 Modernity notwithstanding, all Goossens jewels are still handmade using the traditional techniques of goldsmithing, including lost-wax casting to capture the intricate sculptural details and three-dimensionality of a piece. The gilded metal is hand-hammered, sometimes patinated and set with semi-precious stones and minerals, particularly rock crystal, which Patrick Goossens describes as a “living material”. The gilded baroque metalwork, and the mix of natural and faux materials, remain defining features and echo Chanel’s audacious code-breaking collaboration with the goldsmith she called her “barbaric Byzantine”.

Goossens’ interior objects, including chandeliers hung with huge bespoke cut chunks of rock crystal and mirrors framed in thick gilded wheatsheaves, are also rooted in the Chanel relationship. The story goes that one day Chanel presented Robert Goossens with a rock-crystal globe and asked him to turn it into an object; he modelled and crafted a base of three gilded lions. The lion ball, in three sizes and available in rock crystal, smoky quartz or pyrite, still takes pride of place in the Goossens collection. He also designed Chanel a coffee table with a smoked glass top and a wheatsheaf base.

“Unusually – perhaps uniquely – it is the same artisans in our atelier who make jewels, objects and furniture,” adds Patrick. “Often artisans who have been with Goossens for over 30 years and worked side by side with my father. They can make anything.”