Founders plan for further expansion in Wuhan and beyond

Until recently, Wuhan — the Chinese city where the coronavirus first emerged — was hardly well-known around the world.

For the British jeweller Annoushka, however, this metropolis of 11m people, a third larger than New York, is important. Before the virus hit, the company’s two Wuhan concessions were the top performers of all its stores in mainland China, having opened in September last year.

Annoushka is expanding in mainland China in partnership with Jewelria, the multibrand retail platform of the Hong Kong jeweller Chow Tai Fook. The UK company chose Wuhan, the largest inland transport hub in China, because of its apparent growth rate. “It has a wealthy millennial workforce,” says John Ayton, Annoushka’s chairman and co-founder. “Our customers in China are notably younger — they tend to be in their late 20s and early 30s.”

Annoushka’s Wuhan stores reopened as lockdown restrictions were eased in April and the company has announced plans to launch two more branches in the city. In the past few weeks, China has reported that its gross domestic product in the first quarter has fallen by 6.8 per cent, its first year-on-year decline in more than 40 years.

Yet there are some positive signs: coal consumption at power plants is nearly back to 2019 levels and unemployment fell slightly to 5.9 per cent in March.

Annoushka had forecast gross sales of £13m globally for 2020. “At this point things are a little less clear,” says Mr Ayton. He is not alone in being anxious. A Bernstein Research survey of 30 company executives in the luxury sector found that they expect a €30bn to €40bn (9 to 11 per cent) reduction to their combined top lines this year.

Mr Ayton and his wife Annoushka Ducas, a designer, founded their business in 2009. Today, the company operates a dozen stores worldwide, with seven just in London. 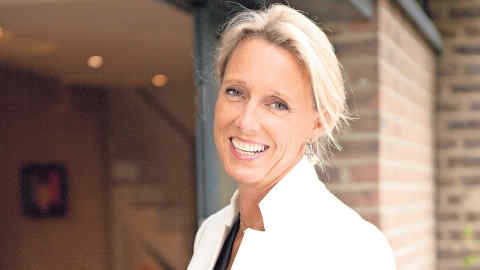 He explains how the brand broke into the lucrative market of affordable luxury: “There was a reason for calling it Annoushka, which was to establish a very personal relationship between the client, the brand and designer.”

The company’s pieces are all made with 18-carat gold and cost between £500 and £25,000. Most sales are in the £2,500 to £5,000 band. The company has avoided wholesale to keep its operation simple. Ms Ducas says: “Wholesale adds so much complexity. We’re not at the behest of anybody else who wants something for the new season, or has discontinued something else or put it in a sale — all those things which sometimes feels like the tail wags the dog.”

Opening stores in China was Annoushka’s first expansion internationally, part of a plan which was conceived as taking a decade to develop. Ms Ducas says a “huge number” of Chinese visitors shopped in its London concessions, “so we knew that they liked it”.

The first Far East store was opened in 2017 inside the Mandarin Oriental hotel in Hong Kong, which gave the brand “credence, confidence and trust”, says Ms Ducas. “Even though we had lots of Chinese customers, we were still pretty unknown in Hong Kong. Aligning ourselves with a brand like the Mandarin was valuable.”

Annoushka’s creations are narrative and designer-led, says Mr Ayton. This helps the company stand out in Asia, where customers tend to focus on big brands and jewellery as an investment. “There is a growing understanding in Asia of what it is to be a designer, and a living designer,” he says.

Cue Annoushka’s bestselling pieces — including the gold, ebony and diamond Touch Wood collection and mother-of-pearl and diamond Dream Catcher designs. Both have a talismanic, emotive quality that is especially resonant during the coronavirus pandemic.

“Over the past weeks I’ve had a number of personal emails from clients saying they’re wearing their Annoushka pieces to help protect them and feel safe in these very uncertain times,” says Ms Ducas. “Talismanic motifs and meanings have always played a huge role in my work.” Ten per cent of all sales are currently being donated to St George’s Hospital in Tooting.

Customers clearly like such stories and inspirations. The company’s best-performing social media engagements are posts about how a piece of jewellery is made.

“The customer is more demanding, in the sense that they want to understand where the inspiration came from,” says Mr Ayton. “They read blogs about how pieces are designed. There’s a real hunger for information.”

Annoushka plans to open more stores in China, focused on second-tier cities. These customers, says Ms Ducas, are “the younger generation who seem very interested in authenticity and newer brands with a real narrative, as opposed to just the luxury houses”.

The company is also looking at standalone stores in Taiwan, Korea and the US. It envisions opening another 20 international stores during this decade.