Diamonds in the rough – the rise of cast-not-set jewellery

How a renegade approach to gem-setting went mainstream

When London-born jeweller Polly Wales was learning her trade at the Royal College of Art, she lived on a narrowboat moored east of the Islington Tunnel, and explored “materials that would sort of wear away as you wore them”. Over a decade later, her student experiments have cemented into a striking signature look that sees organic gold forms encrusted with a kaleidoscope of stones – and the style has garnered her a cult following. Today, she’s swapped the narrowboat for a house in Highland Park, Los Angeles, where she runs the brand with her partner James, alongside two wax sculptors and two goldsmiths in her downtown workshop and foundry.

“It’s amazing that we have collectors and clients who have travelled along with our journey, from making things that were a couple of thousand dollars to pieces now that are $50,000 or $60,000,” she says. “Our aesthetic is still outside the box, though; it is not totally being bought into by the jewellers who sell Rolex watches.”

At the heart of her renegade approach – which is bought into by Liberty, as well as White Bird in Paris and Catbird in New York – is the technique of casting gemstones straight into 18ct gold. “There are multiple ways I go about it,” she explains of the “cast-not-set” method. “One way is that we pour the stones in with the molten gold and they jumble around in the casting process, so you’ll have stones that are half poking out and others that are trapped inside the gold that you may never see.” The colourful Confetti rings are made in this way, as are the Safety Pin earrings, their mélange of stones peeking out from the gold. Another method produces less random results by attaching the gems to a hand-sculpted wax form. Both are the result of years of tinkering, lending a modern sensibility to the centuries-old yet somewhat rough-around-the-edges technique. “‘Cast-not-set’ is a terminology we created because there wasn’t even a name for it when we started out. Now it’s a genre. It’s taught at colleges. A huge number of people are doing it.”

One such is London-based Scottish designer Fraser Hamilton who, says Wales, uses cast-not-set in a “completely different way” to her – often to add a single stone to pendants and rings featuring sculptural wax-cast hands. “Essentially, the hand is holding the stone,” says Hamilton. “That is the setting. It’s held by tension. When the metal cools it shrinks a little bit and pinches around the stone.” The designs started as a way to recreate the experience of finding rough gems in the ground. “I don’t try to make these pieces too exact because that’s what manual setting is for,” says Hamilton, who has recently used the cast-not-set method to capture stones in spiral twists. “In theory, it’s quite a reckless way of treating the stones – and you have to use precious stones, otherwise they’ll crack under the heat and pressure.”

It’s quite a reckless way of treating the stones – and you have to use precious stones, otherwise they’ll crack under the pressure

The element of unpredictability, says Hamilton, is one reason jewellery brands aren’t generally fond of the technique; another is the “gritty” finish. “I think a lot of houses would turn their nose up at the method,” he muses. “They’d say, ‘Why don’t you do it the finely crafted way?’ And, you know, there is an argument for that.” But for Hamilton and Wales, inspiration comes not from the world of fine jewellery but from the craft- and art-jewellery scene – specifically the German-born, New Zealand-based art-jeweller Karl Fritsch, whom they both cite as a major influence. “He’s the don,” says Hamilton. “He’s done a lot of cast-in-place, but he also chemically bonds a lot of his pieces – which is a posh way of saying ‘glues’. He’s done all the moves that young contemporary jewellers are doing now. He’s the one who invented the blobby, plasticine-looking stuff.”

Also from art backgrounds are Elvira Golombosi and Hector Lasso, who bring their skills in sculpture and stone-carving to their joint venture Oraïk. Based in Ibiza, they hand-make bold, totemic rings, necklaces and bracelets that draw on traditional masks and prehistoric animals in a style they refer to as “roughly delicate”. Revelling in the organic imperfections of the lost-wax casting technique, they use gems mid-process to achieve a seamless, flowing design, while also adding semi-precious stones such as aquamarines and amethysts, and sometimes enamel accents, afterwards with traditional setting.

The word “organic” is a common response to the appeal of cast-in-place jewels. Some jewellers’ designs, however, have a more overt link to nature. When New Yorker Laura Caspi set out to recreate a baby lobster claw she’d found on Nantucket Island as a pair of gold earrings, setting a small rough diamond between the pincers led her to try casting the stone in place. “I first tried to make a bezel and then set, but the final look took away from the natural texture of the claw,” she says. “This way it’s as if they were almost formed together in nature.” In west Wales, Ami Pepper’s 9ct-gold interpretations of the Pembrokeshire coast are cast with sapphires, encased so that they cling to rings and pendants encrusted with barnacles or nestle among seaweed-cluster drop earrings.

“My inspiration always comes from nature, as well as historical jewels,” says London jeweller Ruth Tomlinson, who uses cast-in-place in her repertoire of techniques. She errs towards an earthy palette to “create harmony between the stones and the metal – so that they look as if they might have been unearthed like that”. She sees the growing popularity of alternative jewels as part of a larger trend that eschews the shiny and sparkly in favour of the more natural, the vintage, the handmade.

How To Spend It
Gilt trip: Goossens and the golden legacy 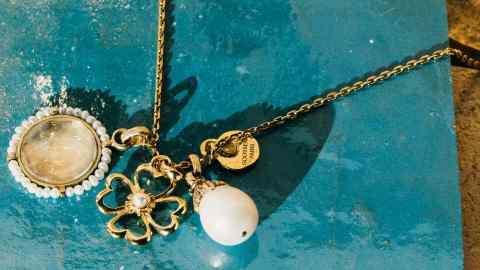 But not everything that does not glitter is cast-not-set. Jewellers such as Ellis Mhairi Cameron in London, Alexandra Dodds in Sydney and Octavia Elizabeth in LA all tap into the rough-hewn vibe, but set their jewels after the fact. “It means I can use softer stones like opals,” says Mhairi Cameron. “I also have better control of the final aesthetic, so clients know exactly what they will receive.” What it boils down to is whether you like to go with the flow, or if you prefer things a bit more, well, set in stone.