Most prospective buyers know that, if they wish to purchase diamonds, they need to get to grips with the “Four Cs”: carat, colour, clarity and cut — the rating system that determines their price.

But, when it comes to rubies, sapphires and emeralds, inexperienced buyers’ only hope is to meet a trustworthy seller.

For many years, dealers and jewellers have racked their brains to produce an evaluation model for these big three coloured gems that could be easily understandable and widely adopted.

And, when the 2020 pandemic forced remote trading through virtual inspection on digital screens, the need for a solution escalated — just the perfect timing for the Gübelin Gem Lab to introduce their new rating system for coloured gemstones.

Although Gübelin started in Lucerne as a watchmaker, the business subsequently moved into jewellery. Its Gübelin Gem Lab opened in the 1920s to appraise stones and the Swiss house has become a renowned authority on coloured gems.

Its traditional reports, costing upwards of SFr200 ($216), will identify a coloured gem, its country of origin where possible, and the presence of any treatment such as heating or oiling. They do not, however, provide any indication about the quality of the stone itself.

However, the new Gübelin Gemstone Rating will now assess the quality, rarity and salience of a specific gemstone by attributing to it a number — Gübelin Points.

The new parameters are modelled after Robert Parker’s wine rating system that, since the late 1970s, has judged wines from across the globe on the basis of a 100-point scale.

“I wanted something simple, a single number that would encompass the quality of the stone and its rarity and immediately give a comprehensive idea of the stone,” explains chief executive Raphael Gübelin.

Work on designing the rating system started in 2018 and it was built on a database compiled over decades recording more than 28,000 gems of proven origin. These specimens are parsed by the Gübelin Gemtelligence, an ongoing project which develops a machine learning-based algorithm to enhance consistency in assessing gems. Gübelin hopes that the new rating system will boost consumer confidence. “There are end-consumers who are interested in the beauty of coloured gems, but they hesitate in buying them because they are difficult to understand, and so they move to diamonds,” he says.

He has a point. Since the early 1940s, when the founder of the Gemological Institute of America, Robert Shipley, replaced nebulous terms such as “river” or “made well” with the rational Four Cs system, the market for diamond jewellery has grown to about $80bn, based on 2020 data — about eight times the size of that for coloured gemstones.

“The Four Cs system has undoubtedly been transformational for diamonds,” says Tyler Harris, a graduate gemologist and an associate partner at McKinsey, the business consultancy.

“It has enabled a consistent vernacular to talk about important characteristics of stones. Equally as important, the 4Cs system provides a framework that links a diamond’s characteristics to value, which not only drives market standardisation but also drives consumer confidence.”

Quig Bruning, head of Sotheby’s jewellery department in New York, agrees that buying rubies, sapphires and emeralds requires more effort when they cannot be appraised in the flesh. “We are frequently asked about nature and quality of the colour and the nature and presence of the inclusions. In general, our clients are looking to us to help them get a more subjective ‘feel’ for a coloured stone,” he says.

Established jewellers in demand for their coloured gemstones — such as Boghossian — only bought stones throughout the pandemic if they were first shipped to them.

What may startle some gem buyers is the absence of the country of origin among Gübelin’s new evaluation criteria. Roberto Boghossian, managing partner at his family firm, understands the logic of focusing on the stones’ “gemological properties” and praises the new rating for bringing “reassurance and transparency for our trade”. But he is convinced that the country of origin will still influence the purchase of larger gems. 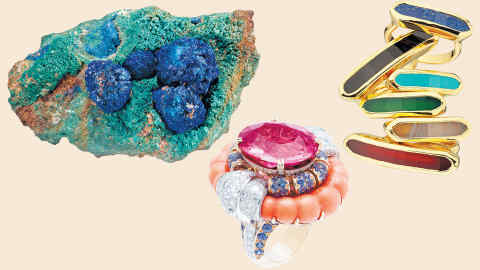 Bruning at Sotheby’s disagrees. “While there certainly are those who are actively looking for Kashmirs or Burmese sapphires, for example, they still want to buy top quality,” he argues. “Kashmir sapphires, Burmese rubies, Colombian emeralds, these gemstones are prized — rightly — for their rarity. But not every gemstone from those treasured origins is top quality.

To promote its new rating system, Gübelin is offering it this year as a complimentary addition to its established Gem Lab report. Otherwise, it is being charged at SFr100 and the company warns its ratings alone are “not suitable to directly deduce buying or selling prices”.

The Swiss house also plans to teach the rating parameters in its Gübelin Academy, which offers students an introduction to sapphires, emeralds and rubies.

Consumers’ interest appears strong. “Coloured gemstones are a growth area in fine jewellery,” says Harris. “In the US, we’ve seen growth in market value for fine jewellery with coloured gemstones be three times faster than diamond jewellery in the last five to 10 years, and it stands to reason that the trend would continue in the near future.”