Green entrepreneurs look to make money and a difference

When Billy Parish dropped out of Yale university to found a youth-focused climate change movement, he never expected it would result in him one day running an energy company.

But after spending eight years as a climate activist, Mr Parish set up California-based solar panel group Mosaic in 2010, becoming one of the many entrepreneurs trying to find solutions to climate change in areas such as renewable energy, alternative meat or electric vehicles.

“I moved into the business side because I felt like we weren’t going to win through altruism,” Mr Parish says. “A lot of people are still economically motivated and need to see the solutions: how do we catalyse and grow the clean energy economy so people can see it as a viable alternative?”

Rather than selling or renting solar panels, Mosaic offers solar loans to homeowners so they can install panels and use the savings from their electricity bills to pay back the interest, saving money over time.

After starting as a crowdfunded initiative, Mosaic is now the leading lender for residential solar in the US, making more than $3.5bn of loans in 2019 to 125,000 households. SolarCity, one of its peers, was bought by Tesla, the electric car and battery company, in 2016 for $2.6bn.

Michelle Palmer
How tech entrepreneurs can recruit for game-changing diversity

Companies such as Mr Parish’s are far from a philanthropic endeavour: they have made some entrepreneurs extremely wealthy. Just as industrialisation in the 19th century created family dynasties such as the Rockefellers and the Vanderbilts, today a new wave of entrepreneurs is accumulating wealth that is likely to last for generations.

“Green billionaires” include Elon Musk, founder of Tesla, Aloys Wobben, founder of Enercon, one of the world’s largest wind turbine companies, and Trevor Milton, founder of US group Nikola Motor, which develops hydrogen-powered trucks. Other successful entrepreneurs include Ethan Brown, the founder of Beyond Meat, the alternative meat company that floated on New York’s Nasdaq stock exchange in 2019, and Patrick Brown (no relation), founder of rival company Impossible Foods. 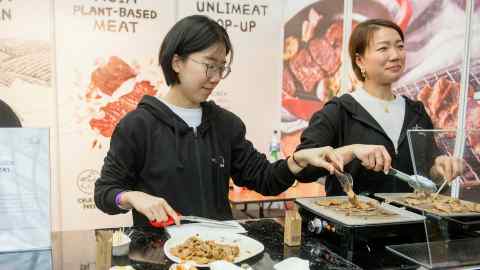 The growing number of companies whose main business helps to cut carbon emissions is creating opportunities for investors.

In the private equity world, there has been a “huge evolution” in opportunities for investors who want to get involved with climate change, says Mat Powley, a director in the private capital investment team at Stonehage Fleming, which advises wealthy families.

But many companies with innovative solutions to climate change — from emission-friendly meat grown in labs to eco-friendly air conditioners — are still only at the start-up stage and in need of investment, whether from venture capitalists or even angel investors.

Higher Steaks, a cell-based meat company, is one of a growing number of start-ups that are trying to make lab-grown foods as a way of addressing climate change, food shortages and animal welfare. The company is experimenting with a technique where cells are taken from a living pig without harming the animal then grown in a lab.

While there were just two such companies as recently as 2016, by 2020 there were more than 60 start-ups globally, though none of their products has yet to hit supermarket shelves. The company raised £150,000 in 2018 and has this year raised a further £1.6m from prominent investors.

Benjamina Bollag, the co-founder of Higher Steaks, says similar start-ups have been snapped up by larger food companies looking to diversify. “I think there will be a lot of acquisitions in this space,” she says.

Mr Parish says that the early individual investors in his company were crucial for its initial success, and wishes that wealthier investors would do more to invest with climate change in mind.

“We wouldn’t be around if individuals hadn’t used some of their private wealth to back us,” he says. “There is a gigantic amount of private wealth out there: the worst example is foundations sitting on huge amounts of private capital and investing it in very traditional ways, which makes me absolutely crazy. The same is true for private families. We need millions of new clean energy businesses and a lot of those small businesses are funded by friends and family — so we need them to step up.”

Alice Ross’s book, Investing to Save the Planet, will be published by Penguin on November 19.