Is technology the future of craftsmanship?

I do feel this is one of those pivotal moments,” says Sarah Myerscough, the London gallerist who has spent the past 15 years nurturing a particularly 21st-century kind of craft practice. We are sitting in her new gallery space in south-west London — an old boat house in Barnes near the river Thames — on a bench that looks like a very hairy dog, minus the head. It turns out that the ivory-coloured “hair” which is perfectly stitched along a parting is agave sisal. It is the work of Fernando Laposse, a Mexican designer based in London, whose other miraculous material invention is a surfacing veneer made from heritage corn husks.

The pivotal moment Myerscough is referring to, however, will happen in Miami. She has been selected to take part in Design Miami’s Curio programme, in which 15 galleries or artists are given a small room-like booth at the fair (now in its 15th year) and invited to present an installation of new work. “We only accept 10 per cent of the proposals we receive,” says Brandon Grom, Design Miami’s director of exhibitions, “so it’s a highly competitive process. It allows us to give a platform to design ideas that aren’t necessarily represented in the core gallery programme.”

Myerscough has shown at Design Miami before, at both its Basel and Miami fairs. She says she got in “by the back door. I didn’t know much about design fairs, but I decided to do the more outlying ones, like Design Days in Dubai in 2012 and 2013, which put me alongside some really established galleries,” she says. “And it worked. I got accepted.” The outing to Dubai was also another useful lesson. “People came to the design fair from the art fair that was on at the same time. That’s when I realised that you need to be in the proximity of a good art fair. The best conversations tend to be with people who are already collecting contemporary art. They look at the kind of work I show, which can be quite experimental, and they see it in fine art terms.”

Myerscough believes that innovation and exploration in craft and design are essential. “It is the only way for craft to stay relevant,” she says. “If we’re too protective of traditional skills and materials, then it stops progress. ” Instead she advocates a kind of craftsmanship that uses technology and machinery — as in the case of woodworker Gareth Neal, who employs 3D printing and CNC cutting — and investigates new materials.

At Miami, she will show new pieces by Marcin Rusak, a 32-year-old Polish practitioner with studios in Warsaw, London and Rotterdam. As much a storyteller as a designer, Rusak is interested in ephemerality and the fusion of nature with material processes. For the fair, he has created a new series of his Perma works, where flowers in mid-decay are set into resin to create a complex patterned sheet material. Perma was originally made in black (with pieces shown in Miami last year), and the change in colourway has had a particular effect. “The black version looked like it was dug out of the earth, it has the vibe of something natural and organic,” says Rusak. “The white looks more like white chocolate, or soap.”

From the material, he then makes furniture that appears to be slotted together. “It’s puzzle-like,” he agrees. “Like archetypes of household furniture. It is usable, but I’d really hope it was more about evoking an emotion in the owner.”

These are pieces that might gradually fall apart as time passes. A collector can have the joy of acquisition and ownership — but probably not forever.

Myerscough started out as an art adviser, with an interest in painting and photography. She helped build a collection for the global law firm DLA Piper and they rewarded her with funding for a gallery space in Mayfair. But when she visited a client to hang a John Hoyland painting they had acquired from her, she was exposed to the world of wood. “I’d always been interested in tactile, sensual pieces,” she says. “But I’d never known this kind of work existed until I visited the house of Hana and Brian Smouha in Chelsea. I was blown away by all the processes of turned wood, the intricacies and variety of what could be achieved from one material.”

The Smouhas, who had moved from Washington DC to London, helped her bring work from American artists — such as Philip Moulthrop and John Jordan — to London to show at the first edition of Collect, the fair run by the UK’s Crafts Council. “People hadn’t seen anything like it,” says Myerscough.

These designers are inspired by the world around them now, by technology and geopolitics

Inspired by the experience, she sought out more local talent, discovering woodturning artists such as Ernst Gamperl and Liam Flynn, and started showing their work in her gallery. Now she has a roster of 20 makers, whose work ranges from Diana Scherer’s textiles woven from plant roots to Marlène Houissoud’s bench made of silkworms cast in pewter. “These designers aren’t looking at vintage work. They’ve no parameters. They’re inspired by the world around them now, by sustainability, technology and geopolitics.”

At the PAD London design fair in October, Myerscough showed two vessels by Gareth Neal. Created using 3D printing in a new black silicate material, they were rough to the touch and mesmeric in their apparent movement. “They were totally removed from the touch of the hand,” she says. “Yet they still had that power you get from hands-on making.” The world of craft can be a tame one, but in Myerscough’s hands at least, it seems to have a fantastic future.

Explore the series
READ MOREMiami Art Week 2019
Is technology the future of craftsmanship? 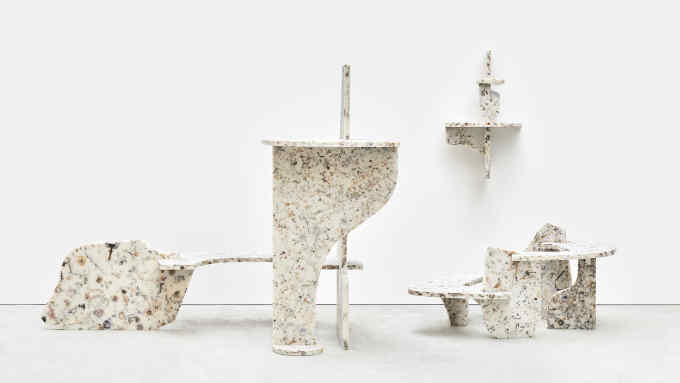