The unassuming façades of London’s Kentish Town do not whisper that celebrities hide within. Yet this is where photographer Rankin has his studio. It is also where I find my triumvirate of interviewees: architect David Adjaye, contemporary artist Theaster Gates and rock legend Bono.

Adjaye and Gates are among the leading talents of their generation. The former’s creations include the Smithsonian National Museum of African American History and Culture in Washington DC. Gates meanwhile is riding the crest of a wave that culminated this summer in his stunning show at Basel’s Kunstmuseum. Spiralling out of the symbol of the Black Madonna, Gates’ revisions of art, gender, history and music expelled from the institution every last gramme of Swiss stuffiness. Bono, lead singer and lyricist of U2, surely needs no further introduction.

As I wait for Rankin’s photo shoot to finish, it’s hard to see Adjaye, Gates and Bono amid an army of assistants. It’s easier to spot the slight, grey-haired figure of Rankin, swerving and shooting with the athleticism of long practice. I can hear his models’ laughter. Deep and uproarious, it suggest convivial male bonding spiced with a soupçon of ego.

Photography over, the four of us settle into a pair of sofas in Rankin’s office. Here, the trio abandon their banter and address my questions with thoughtful attention. We are here to talk about Aids — specifically, the Sotheby’s auction in Miami in December, which is a significant iteration of Bono’s project Red.

Started in 2006 with attorney Bobby Shriver, Red aims to convince global brands — including Amazon and Starbucks — to create Red-branded products whose sales proceeds are donated to the Global Fund. The latter was developed by the G8 countries in 2002 to boost resources against Aids, tuberculosis and malaria. Contributions from Red are invested in HIV and Aids programmes in sub-Saharan Africa.

The Miami auction, now in its third edition, is an important fundraising mechanism, for which artists donate works themed around the colour red. In 2008, Bono collaborated with Damien Hirst, the second, in 2013, was organised with design gurus Jony Ive and Marc Newson, and attracted matching funds from the Bill & Melinda Gates Foundation: together the two Red auctions raised $68m.

For this year’s edition, which will be preceded by a show at Miami’s Moore Building, presented by Gagosian, Theaster Gates and David Adjaye have come on board. Before we get to the nitty-gritty of putting together such a complex pop-up, I ask Bono why he believes this is such an important cause. “Seven thousand girls are being infected every day. They are mostly teenagers and they are mostly in sub-Saharan Africa,” he replies.

Bono’s near-nerdish knowledge of HIV statistics contrasts with his appearance. In his violet-tinted shades (he suffers from glaucoma), black jeans and denim jacket, his drained pallor and stubble betray his familiarity with a dusk-to-dawn clock. Yet this is a man who has been trying to save the world for more than half of his life. Inspired by the Band Aid campaign in the mid-1980s, he has focused on Africa for the past two decades. His philanthropy has won him a cache of accolades, including 2005’s Time Person of the Year (which he shared with Bill and Melinda Gates).

To some he is a global saviour; to others, the complexity of his financial affairs has tainted his reputation. After our interview, an article named him as an example of those who fail to realise that charity work is no substitute for taxes. (U2 moved their tax affairs — legally — to the Netherlands in 2006.) Asked for a comment after our interview, Bono’s spokesperson replied. “Bono and U2 pay millions in tax. Given the entertainment industry is a global one, Bono works and therefore earns all over the world, and pays his taxes all over the world, including in Ireland.”

Asked why he got involved in the Red Project, Theaster Gates replies that Bono’s “passion” was inspirational. “I’m busy with my own causes,” continues the artist, whose upbringing on the tough South Side district of Chicago has instilled in him a social conscience that fuels his own philanthropic foundation, Rebuild. “But the truth of the [Aids] emergency is hard to sidestep.”

Behind the urgency of Red’s work lurks the grim reality of compassion fatigue. “Essentially, we’re 20 per cent off funding,” Bono explains when I ask why Aids has regained traction after years in which its reach seemed to have been stemmed. He says that when he spoke to politicians in the US in the hope of galvanising them into action, he was told again and again: “We understand, but we’re not feeling it in the malls. We’re not feeling it in our constituencies.” 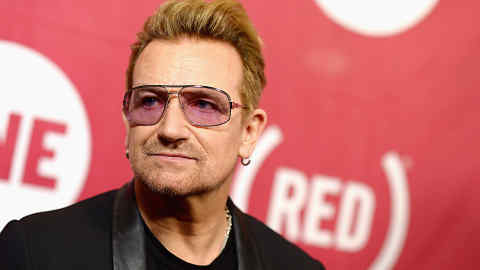 The danger of collective apathy chimed with Gates. “It’s what happens if you don’t live in a problem state,” he says. “Many people have causes but they live in Beverly Hills and they throw money at the problem.” He takes an actorly pause. “I live in a f*cking problem! And when you live in a problem, it’s hard not to relate a faraway problem [to your own].” Another dramatic breath. “And then I needed some help!”

“I live in Europe but I’m Ghanaian,” Adjaye continues, conveying the bond he feels with Africa, where he lived until he was 14. Once he realised that Aids had renewed its grip, Adjaye knew he wanted to be one of “the agents of emotional change”.

The logistics of the auction appear complex. Who does what? “I’m just their road crew!” retorts Bono. When the laughter dies, Gates replies seriously. “I feel that we are conjurors. [David and I] are artists who [can] use our public platforms and networks to help our friends believe in this project.”

Gates and Adjaye chose the artists to approach. “We discussed the idea of re-shedding light,” says Adjaye. “It’s about re-illuminating. So we looked for people who had luminosity in their work.” Given that the artists who will donate works include Ai Weiwei, Sean Scully and Guillermo Kuitca, it was no small ask. “We are all in our studios, all preoccupied, all over-committed,” agrees Gates. “But at some point, the willingness to fight for injustice trumps etiquette and manners.” Bono is more succinct. “You become a total pain in the hole,” he says.

Artworks to be sold include “(RED) Eclipse 2018”, a circular oil painting by Marc Quinn whose burning swirls and stains suggest sunset seen through an aeroplane window. From the late Zaha Hadid comes “Liquid Glacial Colour Coffee Table”, an acrylic table made in an edition of eight whose transparent surface gives its scarlet hue the impression of red wine behind glass. And Sean Scully has donated “Red” (2018), one of his signature grid paintings in bold red and black slabs. Both Adjaye and Gates have created new pieces; other donor artists include Jeff Koons and Christo, Marilyn Minter and Teresita Fernandez.

Despite the intentions behind Red, some experts believe that aid does Africa more harm than good. In reply to that, Bono gestures towards Adjaye, muttering: “Ask the African first.”

“There’s a huge momentum to go beyond aid,” agrees Adjaye. “But I don’t think Red is about aid. [Aids is] a global virus and not something any continent on its own can deal with. What Red is doing is a planetary thing,” he continues. “The beautiful thing is that if we behave like a planet, we can solve lots of problems really quickly.”

On show from December 1, gagosian.com