Lead the way with 50% off
Collecting: Frieze New York 2021
See all 8 stories
Collecting

When I catch up with Precious Okoyomon, they’ve just finished rolling down a hill. It is mid-afternoon in London, and early morning in Aspen, Colorado, where they are preparing for an 18-month exhibition on the roof of the very fancy resort’s very fancy Art Museum — a building clad in a lattice sheath, by the Japanese architect Shigeru Ban. Okoyomon is staying in a cabin at Anderson Ranch, an arts centre 15 minutes out of town. There, they are working on clay tiles and sculptures which will become part of an evolving rooftop garden that they describe as “a space that allows you to fragilise. I’m trying to dream up portals. I’m actively inclined to help people find new ways out of their feelings.”

This being Aspen, the cabin is by a golf course, which, avers Okoyomon, allows for very good hills: rolling down them helps the process of connecting with the earth, which has been a life-long preoccupation over their 27 years. Indeed, for all its natural beauty, human intervention is never far away in the billionaires’ favourite ski resort. “Yesterday I hiked to the top of the mountain,” says Okoyomon, “and when I got there it was a mountaintop of million-dollar houses. I’m not used to private jets and rooms full of Warhols. The idea of ownership feels crazy to me.”

Okoyomon is a poet, chef and artist whose work, gender and vocabulary is not confined by traditional lines, and on whom the spotlight has fallen in the last couple of years. As a performer, Okoyomon has a mesmerising presence, producing streams of words in honey-soft voiced sequences that dip from light to dark and are sensational and atmospheric. (The lyrics work well on Twitter, too.) As an artist, their work has become desirable. Miami mega-collectors, the Rubells, snapped up a large-scale sculpture of a lynching tree strung with noosed soft toys when it was shown in the Florida city in 2019.

Before the Aspen show opens in June, Okoyomon will have been honoured with the Frieze Artist Award at the New York edition of the fair. They are planning a performance “like a tower of Babel”. An all-black orchestra will play Messaien’s “Quartet for the End of Time”; a number of their poet friends will participate; Okoyomon will read an “all-day” poem (“A long lyric, about three hours, which I’ll break up into 40-minute sections”). It will be filmed before a small invited audience, then shown as a video piece at the fair, and later online.

Okoyomon was born in Wimbledon, a suburb of London, but moved with their parents back to Lagos as a one-year-old, and then to the United States aged nine. “Lagos was family- and community-oriented, and then in the US, I lost the sense of home and got the sense of displacement,” they say. “In London, there’s a space in which to be a British-Nigerian. In bible-belt Ohio, I felt myself explaining myself to people, that I didn’t have a monkey and grow up in a hut. But it developed my sense of whiteness too, that there’s a co-oppression at work.” It is perhaps no surprise that much of their work focuses on the simultaneously shackled but untethered experience of black America, alienation, death and decay; yet equally on the importance of love, rebirth and collectivity.

Okoyomon is interested in ecosystems in the natural and human worlds, and the presence of colonialisation and enslavement in both. The Aspen garden will feature plants indigenous to the region — dandelions, mugwort and milk thistle — and invasive species like kudzu and honeysuckle. Over 18 months, it will create an ecosystem of its own. Fruit trees will grow next to human-scale angels — some in fired clay, and some in materials which will melt away. The angel — neither dead or alive, male nor female, nor located in time — recurs throughout Okoyomon’s poetry and art.

Okoyomon completed their education at Shimer College in Chicago, a peculiar liberal arts school in the “great books” tradition. There, among other subjects, they studied pataphysics, described by its originator Alfred Jarry as the “science of imaginary solutions”. Simultaneously they worked at Alinea, a $350-a-head fine-dining establishment. “Both places were oppressive,” they say — laughing. “It was like studying the enemy.”

Both, however, have left a mark. Okoyomon seeks out alternative worlds in their work, like the Surrealists (followers of Jarry) before them, and they are part of the Spiral Theory Test Kitchen, where multisensory dinners are intended to break down emotional and physical barriers between participants. “Art doesn’t happen just by yourself,” says Okoyomon. “You can’t build new worlds on your own.”

“The dinners are beautiful,” says Claude Adjil, the curator at large at Aspen (also a curator at large at the Serpentine in London). “They make any other dining experiences seem totally formulaic. There are tastes and colours you’ve never seen. Precious likes fruit and flowers.” The diners are required to feed each other. “That’s part of the spiralling,” says Okoyomon, “to create entanglements. I’m just trying to dream up new ways to dissolve away the communication norms.”

At the end of last year, Okoyomon spent three months in Arles, as an artist in residence with the LUMA foundation there. It is an elaborate arts campus, driven by the Swiss philanthropist Maja Hoffman, that occupies an old SNCF rail yard. To celebrate the completion of its one new building — a controversial and craggy tower by the American architect Frank Gehry — there will be an exhibition of new work. Okoyomon’s piece is “a sort of terrarium, a home for giant African snails. You can wheel it in and out of the building, so the snails can be outside sometimes, and they’ll be fed and taken care of.” Giant African snails, seen as invasive as kudzu in certain parts of the world, are banned right across the US.

There are no hills in Arles, but the nearby Camargue provided spiritual satisfaction for Okoyomon. “It made me write new poems, they feel like the winds, the mistral,” they say. “You feel like god is there.” They returned to New York, where they have a studio on Park Slope, Brooklyn, in December. The day after they got back, a neighbour ran over their dog, a toy poodle called Rainbow. They were destroyed by the experience for a while. “There’s something about the non-verbal communication of love,” says Okoyomon. “It’s beyond the human experience. It reminds you of the cosmic elements of life. I mean, I love language, but it has its limits.”

Explore the series
READ MORE
Collector Suzanne McFayden: ‘Buying art is a way of collecting different pieces of me’ 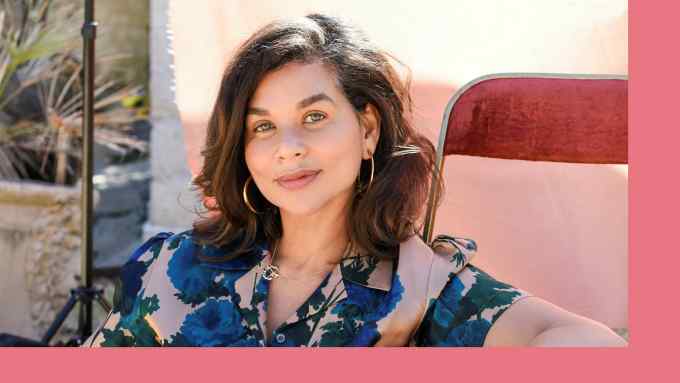