Royal Dutch Shell has been walking a fine line between investing in its traditional oil and gas businesses while pledging to develop new ones for a low-carbon future.

The energy major, like its European peers in particular, has to placate its traditional investor base as well as a growing number of shareholders concerned about climate change.

The Anglo-Dutch group sees part of its future in the power business, which chief executive Ben van Beurden says could be “very significant”, sitting alongside oil, gas and chemicals.

But it also has to prove these investments will generate a suitable return for shareholders. Shell has “big aspirations” in the electricity sector, Mr van Beurden said at its strategy update last month, but “we are investing with care”. This emphasis is vital for those watching shareholder returns. Shell plans to increase payouts through dividends and share buybacks to $125bn between 2021 and 2025 — up from $90bn between 2016 and 2020.

But as global demand for electrical supply increases, Mr van Beurden said the company would act with “conviction” and make investments in “the future of energy”.

Public sentiment towards many oil and gas companies has soured as criticism of them for not taking sufficient responsibility for their role in global warming has intensified. Even so, some of them still believe their brands have consumer appeal. After selling petrol and diesel at the pump, they are now trying to penetrate the market for household energy supply.

The International Energy Agency expects electricity to be the fastest-growing component of energy demand over the coming decades.

But Mr van Beurden underscored the need to “demonstrate that these businesses can be self-funding” and generate returns of at least 8-12 per cent. These would match the returns of traditional oil and gas businesses and are far above many regulated utilities.

Over the past two years, Shell has made a series of small investments in this area, from Singapore-based solar developer Cleantech Solar to home battery maker Sonnen of Germany and UK electricity aggregator Limejump. It also bought UK energy supplier First Utility, which it has rebranded as Shell Energy.

ExxonMobil and Chevron, the US supermajors, have largely avoided following Shell and some European peers into green energy, drawing criticism from climate activists.

Though Shell sees a growing role for cleaner energy forms, its traditional business will still dominate spending plans amid robust global demand for hydrocarbons. Shell will spend $2bn-$3bn on new energies each year between 2021 and 2025. This is, however, a fraction of the $30bn allocated for annual capital expenditure, focused on sustaining its oil business and growing gas and chemicals divisions. Top executives at Shell say they do not see the 50:50 oil-to-gas fuel mix changing any time soon, leading some investors and campaigners to query how serious the company is about its green push.

For every environmentalist who will shudder at the thought of Shell not moving away from hydrocarbons, and activist investors who warn of stranded oil and gas assets that ultimately present a long-term threat to their businesses, one equity analyst will be reassured by the Shell executives’ admission.

Irene Himona at Société Générale says there had been concern among some investors that the company would plough large sums into non-commercial ventures amid pressure to take action on climate change.

The message from the strategy day was “shareholder-friendly”, she says, adding that Shell’s move into the electricity business was as much to do with securing an outlet for its future gas production as it was about reducing emissions. “Until this [electricity supply] business can generate returns, they are not going to scale up. Why would you destroy value?” she says. 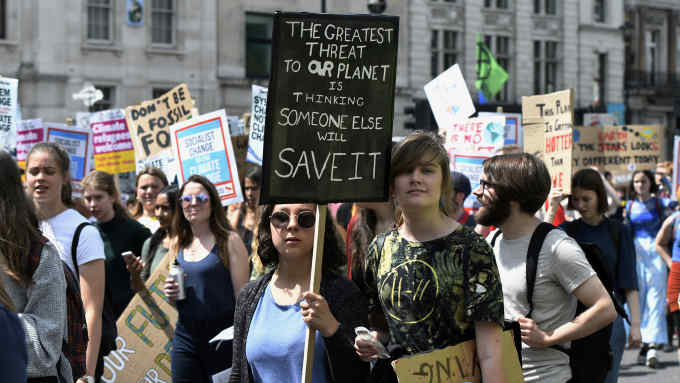