Why did it take two years? Last night in New York, Anthony Vaccarello showed his first full men’s collection at Saint Laurent since he took over as creative director in 2016. Vaccarello’s vision for menswear turns out to be pretty similar to that of his predecessor, Hedi Slimane: tuxedo jackets, flimsy shirts, skinny jeans, Cuban heels. He could have shown this back when he first started. Maybe a pause was needed for this signature to be seen not as Slimane, but as Saint Laurent.

The show was the opener to the spring/summer 19 menswear shows, and the latest example of extreme muscle flexing from conglomerate brands. Last week, Louis Vuitton paid for its guests to travel to Saint-Paul de Vence for its cruise collection, while Gucci flew its audience to Arles. Saint Laurent took editors to New York just for this show (Saint Laurent paid for my travel and accommodation with the understanding there was no editorial control). The billion-euro label is one of Kering’s most profitable, posting a 25.3 per cent rise in revenues in 2017.

“I didn’t want to invent things,” said Vaccarello after the show. We were in a room under the catwalk, a scaffold construction on Liberty State Park in New Jersey. Scenery for the outdoors show had been the Manhattan skyline at night, from One World Trade Center up past the Empire State Building. There was precedence in the grandeur: last September, Vaccarello staged a women’s show in Paris with the Eiffel Tower as backdrop.

Opening look was a black tux with a leather panel over the shoulders. Beneath was a black collarless shirt with gold folkloric trim. Jeans were black and belted. The tone of the show was set. A slim black coat took a neat tailored line. Leather blazers looked sharp. Some pants had a slight flare. Most garments looked like those that could already be found in a Saint Laurent store.

Crucial fact: Yves Saint Laurent himself barely designed any menswear. Unlike in women’s, there is no great catwalk archive on which to rely. “That’s why when I am doing Saint Laurent menswear, I’m imagining Saint Laurent himself,” said Vaccarello. “He was wearing high waisted trousers, pointy shoes, without being too literal, we are not in the 70s any more. I like to be surrounded by all that imagery of Saint Laurent without starting from scratch each season.”

It shows how successful Slimane had been in founding a 21st century idea of Saint Laurent, that this is now the understood vision of how Saint Laurent himself would dress today. Vaccarello staged a good Saint Laurent show. Now it would be great to really knuckle down on the individual pieces that will leap off the rail, whether for their wearability or their outlandishness, maybe even both.

There were 10 female models in the line-up, also dressed in variations of the jacket/flimsy top/black jeans uniform. Somehow they seemed more natural, as if they’d actually chosen to wear the clothes themselves. This is the challenge for Vaccarello: not just menswear, but what men might want to wear. 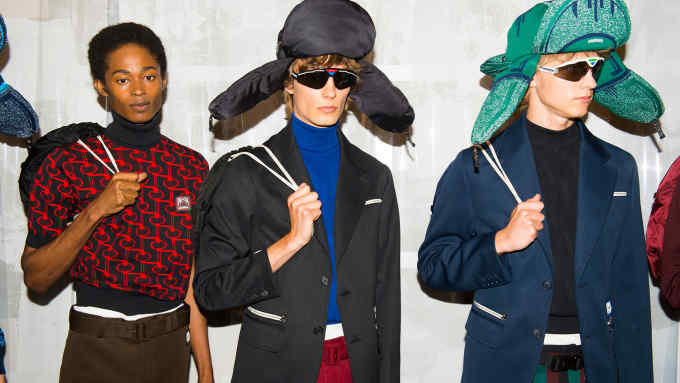