Lead the way with 50% off
Precious metals

Sign up to myFT Daily Digest to be the first to know about Precious metals news.

A rally in the price of silver fuelled by a sudden burst of interest from retail traders rapidly unwound on Tuesday, with many veteran investors left scratching their heads over the episode.

Silver fell as much as 8 per cent to $27 an ounce, after leaping 12 per cent the previous day to the highest level in eight years. The London Bullion Market Association, which oversees the silver market, said more than 1bn ounces of silver was traded on Monday, more than three times the average towards the end of last year.

The pullback underlines the difficulties facing small investors, even when they combine forces, in influencing the global silver market, where $6bn worth of the metal changes hands in a typical day. It also reflects growing pushback on the internet forum Reddit against the effort to push up silver prices — a strategy posed by a user last week.

The rush into silver started on Thursday last week as the subject began picking up steam on online discussion sites. One user on Reddit suggested buying it to put a “squeeze” on banks. The post in the r/WallStreetBets forum said it would be “incredible” to make large banks active in the futures market “pay dearly” for their supposed bets that the silver price will fall, mirroring the successful campaign among amateur traders to fire up the share price of consoles retailer GameStop.

Professional analysts and traders quickly questioned the strategy. Unlike GameStop, which had been the target of negative bets among hedge funds, there was no large short position in silver futures. In fact, speculators were net long the metal, meaning they were betting on prices rising.

Analysts said bullion banks such as HSBC and JPMorgan did not have speculative “naked short” positions in silver, and if anything would make money by selling silver to exchange traded funds and helping miners hedge exposure.

“It’s the wrong understanding of the market,” said Bernard Dahdah, an analyst at Natixis. “It’s trying to apply the same rationale as GameStop. But most of the market is long silver. The banks are going to make more profit and [the silver buyers] are indirectly sending their own money to them.”

One trader said he thought silver promoters may have used Reddit to advance their own agenda. “I’m beginning to think that they are being suckered by the silver scammers to try and get the price up,” he said. 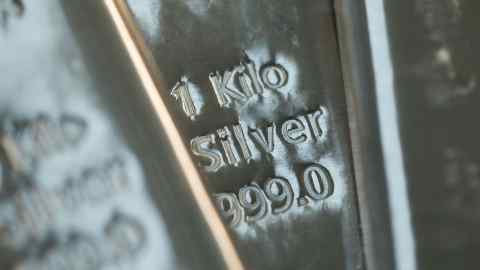 “They’ve been able to bid it up and maybe it continues, but who is left holding the bag when it’s over?” another precious metals trader said. “I’m a little bit at a loss as to who is being targeted here and who will be in pain from these moves.”

But the banks were likely to have taken the position only to hedge their holdings of physical silver, meaning the impact from the sudden price rise would be neutral, according to analysts. Instead, hedge funds and other speculators — who were net long more than 44,000 silver contracts on Comex last week — would be the likely winners from a rising silver price.

Analysts noted that the language promoting silver on Reddit was similar to that of gold bugs who for years have blamed low gold and silver prices on artificial suppression by the big bullion banks, an impression that was made worse by JPMorgan’s admission in 2020 that it had manipulated precious metals futures over eight years.

The US bank paid a $920m settlement with US authorities over the practice known as spoofing, which involves quickly placing and withdrawing buy and sell orders to give other traders a false impression of demand.

Chris Powell, a director at the Gold Anti-Trust Action Committee, one of the most prominent of the gold enthusiasts, said he applauded the action by the Reddit poster.

“If Reddit-inspired investors think that some powerful elements, with the surreptitious support of governments and central banks, are shorting silver and silver mining company stocks in pursuit of suppressing the price of a monetary metal that potentially competes with government currencies and bonds, of course I agree with them,” he said.

The ETF was the biggest destination on Monday for new retail money, exceeding high-profile securities such as Apple and Tesla shares and the popular QQQ ETF that tracks the Nasdaq 100 index.

But investors who bought the iShares Silver Trust early on Monday morning would have made a loss by the time it closed.

“Anyone buying silver should know that it’s called ‘the devil's metal’ for a reason,” said Adrian Ash, head of research at BullionVault. “Volatility can be swift and violent, and it can be hard to miss the long-term uptrend in prices if you suddenly find yourself sitting on a loss.”

Get alerts on Precious metals when a new story is published