Talking ahead of her London Fashion Week show, Victoria Beckham said of her collections that “I only ever put out there what I want myself”. This strategy not only gives her “community” — as she called her customers — a sense that they are buying something authentic, it also gives her brand consistency.

The hard-working former pop star also launched her first beauty brand on Saturday, with a direct-to-consumer business model. She said that the people who had a sneak preview could tell it was hers from the branding and packaging alone, and she’s achieved a similar goal with her clothing line. It’s all very VB.

It’s worth pausing to think that, while musicians and celebrities such as Rihanna, Kanye and Beyoncé launching clothing lines is now the norm, Beckham came up against plenty of cynicism when she launched hers in 2008. She has done well to give it a chic identity that bears little resemblance to her former career.

Since Victoria Beckham came back to London Fashion Week in 2018, after showing in New York for years, she has become one of the most anticipated shows of the event. Images from her collections are some of the most clicked-on. However, prestige doesn’t immediately translate into profits: in December 2018, Victoria Beckham Limited reported an operating loss of £10.2m in the year to December 2017, despite a 17 per cent increase in sales.

The desire for her garments is there, though. Fans of her label swear by its combination of style and practicality and this show — held amid the grandeur and high security of the Foreign and Commonwealth offices — offered a wearable mix of eveningwear and tailoring in a fresh and surprising colour palette.

Beckham said she metaphorically chucked 70s and 80s colours “into the VB blender” and the result was a colourful, airy collection with a retro accent.

Neutral shades of biscuit and butterscotch appeared throughout: on trouser suits, dresses and jackets, and these were mixed up with shots of ice blue, dark red or purple. Pink cords in the new slim-flare trouser shape were paired with brown checked jackets. Safari detailing was a motif throughout, and patch pockets on a trench and blazer gave an overtly 70s look.

One of the highlights was the dresses. Loose, slightly nightgown-like silk styles with cascading ruffles came in butterscotch, imperial purple, apple green and ivory. They danced and billowed around the body in a way Beckham described as “sensual rather than sexy.” She knows what her customer wants. 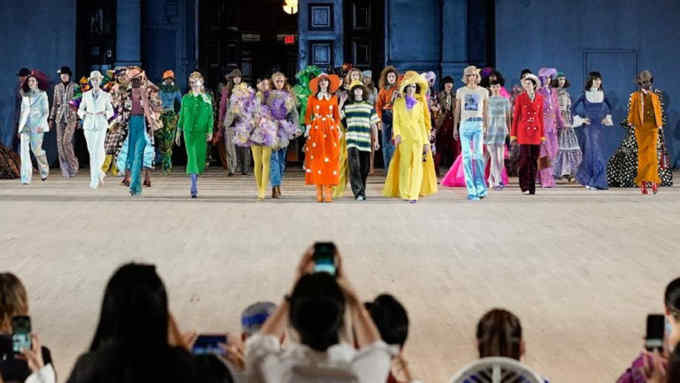