At home with Champagne Charlie

The original “Champagne Charlie” was the 19th-century bon viveur Charles Heidsieck; founder of the eponymous champagne house and the man widely credited with popularising champagne in the States. A lover of parties, hunting and women, the champagne merchant became a celebrity there: “I can’t make a move without journalists on my heels,” he wrote to his wife. “It’s sometimes a nuisance [but it will make it] easier to sell my champagne.” Charles Heidseick’s reign as the bestselling champagne in the US lasted for almost 80 years.

Today, Charles Heidsieck enjoys a reputation as one of Champagne’s smallest, but most distinguished, grandes marques – an insider name renowned for impeccable blending and sumptuous Chardonnay. Unlike its gregarious founder, who was born 200 years ago this year, it tends to be rather discreet. But this month it will make a splash with the launch of Champagne Charlie, a new ultra-luxe cuvée.

The £450 champagne is a reimagining of a cuvée of the same name that existed briefly in the 1980s, which contained an extravagant proportion of “reserve wines” in the blend from the house’s exceptional library of back-vintages. Blended from roughly equal parts Chardonnay and Pinot Noir, and almost 80 per cent reserve wines, the new iteration is silky and voluptuous, with hedonistic notes of pineapple, white chocolate and tangerine. But there is freshness and precision from what cellar master Cyril Brun describes as “noble bitterness”.

“I wanted to create a wine that was already close to its peak – it’s for people who want instant pleasure,” he says (it certainly seems that the new generation of fine wine drinkers are less inclined to lay wines down). The champagne is a blend of vintages, but a backbone of 2016. The year on the label, 2017, slightly confusingly indicates the year it was cellared. Fewer than 5,500 bottles have been produced of this edition, but Heidsieck has promised more releases in the coming years. 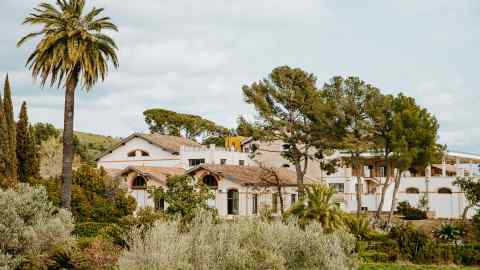 This year is also when Charles Heidsieck celebrates the relaunch of Résidence Eisenhower, a grand old eight-bedroom mansion in the heart of Reims, beautifully restored by Heidsieck’s billionaire owners Christofer and France Descours. Formerly a bolthole of President Eisenhower, it is now a hôtel particulier-for-hire, complete with bar, ballroom, 20-seater dining room and pretty walled garden. It’s imposing from the street but fairytale inside, with the original features painstakingly preserved, including an art nouveau staircase, stained glass and gilded wallpapers, and handpainted bathroom tiles. Rooms such as the oak-panelled fumoir, which was once Eisenhower’s study, are furnished with vintage and chic contemporary pieces.

In the basement is a room where guests can enjoy tutored tastings of Charles Heidsieck, Piper-Heidsieck and Rare champagnes; with a concierge on hand to arrange vineyard tours and visits to Charles Heidsieck’s spectacular chalk crayères. Champagne Charlie would approve.