Ingrid Newkirk: the animal activist is still angry at 70

A couple of years ago, Ingrid Newkirk had an argument with her personal assistant, who was impertinent enough to leave the office at 7pm. He told her that he had a life. She replied that playing video games each evening wasn’t much of a life, and the conversation went downhill from there.

The encounter underlines how Ms Newkirk — co-founder of perhaps the world’s most notorious animal rights organisation, People for the Ethical Treatment of Animals (Peta) — is still obsessed by the cause. “I’m so tired of hearing this work-life balance,” she sighs. “What is your life? Is your work, if you work for a social cause, not part of your life? Work isn’t a liability — it’s a joy.”

Two months before her 70th birthday, she is unashamed workaholic. “I keep thinking, time — where did it go?” she says, staring at her wrist for dramatic effect. “I’ve got to hurry up.”

The animal rights movement is on a relative high, with the rise of veganism across the US and Europe and the decision by various fashion houses to stop using fur. But Ms Newkirk has no intention of retiring from Peta, the organisation that she set up in 1980. “Couldn’t possibly. Would love to, would love to have never started, but ain’t going to happen.”

She is determined to “completely revolutionise the clothing industry”, making wool as unacceptable as fur, which Peta targeted using adverts of naked supermodels. She also wants people to take an “all-encompassing” view of animals, instead of focusing on vegan “doughnuts and cupcakes”. “I don’t need to pick a fight — it’s out there, crying for it,” she smiles.

Like Peta itself, Ms Newkirk is not universally popular. Her antics — including gruesomely gatecrashing fashion shows — have alienated even those sympathetic to her cause. In her will, she has asked for her body to be used as “a human barbecue”, and her feet to be made into umbrella stands, to bring attention to animal suffering. When Peta makes activist investments, company executives complain that they feel bullied.

Yet, in person, Ms Newkirk is charm personified. “Be kind, be kind,” she says to the photographer as he leaves the room. She emphasises that Peta can be nuanced: although it protests against the use of fur, it also distributes donated fur coats to children in Afghanistan, where they aren’t worn as fashion statements.

She was raised in the UK and India, before moving to the US in her twenties. After a chance encounter with a neighbour’s kittens, she became outraged by pet shelters and then became radicalised by the treatment of animals on farms and in laboratories. Since then, she has been arrested and vilified (“Ingrid Newkirk is the worst person in the world,” ran a headline on the feminist blog Jezebel.)

What has allowed her to stay the course? She points to her education in Indian boarding schools, where meals involved cutting worms out of potatoes and pupils bathed in four inches of cold water twice a week.

“Nobody in their right mind would want to go to boarding school — it’s like going to prison, at least the old ones were — but it gives you a very strong sense of independence, and just thinking, ‘I’m going to have to sort this because no one’s going to help me’,” she says. 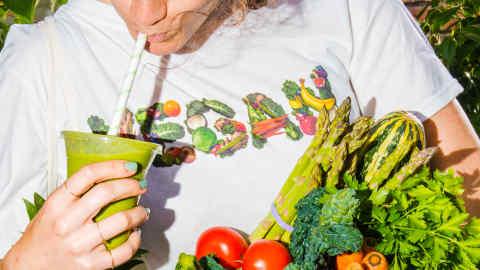 Ms Newkirk’s basic philosophy has not changed since the 1970s, when she read Animal Liberation by the Australian philosopher Peter Singer. Put simply, animals are “not things, they’re not props, they’re not cheap burglar alarms or hamburgers or shoes. They’re individuals like you.” She sees cruelty in absolutist terms: wool is as bad as the dairy industry. “It’s all ghastly.”

In Peta’s early days, animal rights was a fringe concept. But Ms Newkirk is in some ways nostalgic for that era, when there were at least “serious talk shows” where the idea could be discussed.

“We would have an hour or half an hour to put our perspective out. There was no such a thing as a sound bite when we came into being,” she says. “Being able to talk to people in an in-depth way about a philosophical and ethical issue is nigh impossible these days. It’s Kim Kardashian or nothing. But we manage.” (Indeed, Peta once paid for billboards criticising Kardashian’s decision to wear fur.)

I almost don’t see the fur and the feathers — I see the person . . . I don’t see why other people don’t see — there’s a man looking at you, there’s a child

Ms Newkirk finds today’s media environment less intellectually satisfying and does not pretend to grasp fully social media on which Peta, with its millions of followers, now relies heavily. “I hate the expression, ‘I only have so much bandwidth,’ but I’m totally immersed in [the organisation], it’s just that some parts I don’t understand.”

Peta is now an organisation with a $56m annual budget, and Ms Newkirk guides its operations from India to Australia. “We now have the history of the organisation for 40 years, so instead of someone having to spend a lot of time figuring something out and maybe getting it wrong, I can often lend a helping hand.”

Rather surprisingly, her passions have included sumo and Formula One. She has a sumo statue at home, although she hasn’t watched the sport for a couple of years after two of her favourite wrestlers were caught up in a corruption scandal. In Formula One, she was close to Michael Schumacher, and now roots for Lewis Hamilton. “I wasn’t keen on him until he became a vegan — now of course he’s my hero.”

Hanging around with sports stars is not the usual activist life. Are her days of being arrested over? “No, not necessarily.”

OK, but maybe she has become less provocative with age? “Unfortunately not,” she laughs. “I think I’m becoming more radical with age, perhaps.”

She explains that she has always had a kinship with animals, but these days “I almost don’t see the fur and the feathers — I see the person . . . I don’t see why other people don’t see — there’s a man looking at you, there’s a child.”

Well, I say, there are differences between species. “What? What important fundamental difference of any sort is there?” She rolls her eyes with complete disdain. And for a split-second, I see the resolve that once faced her poor office assistant. It’s hardly worth disagreeing. You turn if you want to; Ingrid Newkirk isn’t for turning.

To read more articles like this one, visit FT.com/nextact our content hub for readers in later life