In with the fashion crowd: fine jewellers become less precious about trends

With styles that are more experimental than enduring, designers are engaging a younger clientele

For a long time, “fashion” was a dirty word in luxury jewellery. Fashion jewellery was seen as cheap, made of non-precious materials, worn for a season and discarded.

Fine jewellery’s old guard would avoid anything that might be deemed too fashionable. It was feared that gold and diamonds might lose the enduring qualities that marketing strategies, such as De Beers’ “A Diamond Is Forever”, were built on. No longer.

“The narrative has gone from ‘Buy this now and wear it every day for the rest of your life’ to ‘Buy this now and it will survive the trends cycle’,” says Jodie Marie Smith, an adviser to jewellery brands. Jewellers, she says, now see the benefit of engaging with younger consumers with different values.

Brands, she says, are shifting from “images that are styled to high heaven and shot in Monaco, and have nothing to do with the life you even want to lead” to relatable imagery — showing luxury jewellery shot with casual outfits on models posing outside the supermarket, or on a night out.

British jeweller Shaun Leane has dipped into 1990s nostalgia to create a black-and-white campaign for its Rose Thorn collection, using models in denim and monochrome cotton basics. Tiffany & Co has tried a similarly styled campaign with the slogan “Not your mother’s Tiffany”.

Luxury jewellery houses have also been experimenting with cross-genre collaborations. Parisian jeweller Messika co-designed a collection with model Kate Moss, with a fashion show-style launch in Paris, complete with a front row populated by models and influencers. The collection is also launching in the metaverse via fashion gaming app Drest.

At Dior, artistic director of jewellery Victoire de Castellane has been working with menswear artistic director Kim Jones on high jewellery pieces for its 2022 lines, including a men’s pearl necklace with diamond-set cactus bursting with enamel blooms. In 2020, it invited fashion videographer and YouTuber Loïc Prigent, known for his irreverent, punchy content, to film with de Castellane to mark 20 years of its fine jewellery division.

Louis Vuitton similarly invited Prigent to the launch of its high jewellery collection, Stellar Times, later that year, and the resulting video felt very much like the energetic backstage reporting popular at fashion weeks.

For NYC Jewelry Week’s co-founder, JB Jones, it was a moment at the Kenzo AW22 show in Paris in January that captured this new mood, when musician Pharrell arrived wearing sunglasses set with 25ct of diamonds that were the result of a collaboration with Tiffany. “It isn’t any more about the attainment of a luxury item; it’s about how people want to express themselves through jewellery,” says Jones.

This desire to experiment with fine jewellery outside of the carefully crafted narratives laid down by luxury houses is partly what led Jones and her business partner, Bella Neyman, to set up NYC Jewelry Week, in 2018. Unlike New York Fashion Week, it is a consumer event.

“We wanted to say it’s OK to wear it how you want to wear it, and we didn’t see that happening with a lot of larger brands,” says Jones — pointing out that most consumers will mix luxury jewels with more accessible or vintage pieces, just as fashion followers might pair a Zara dress with a Chanel handbag.

Jewellery photography is also becoming more experimental. Smith points to a rise in flash photography and imagery shot on the type of lo-fi cameras the Gen-Z crowd favour, as well as a diminishing reliance on picture-perfect shots.

New York-based Ondyn, which produces high-end diamond jewellery, used long exposures in its latest campaign, making the jewels appear as tantalising blurs. “We wanted the imagery and aesthetic to be more about the dream and magic of wearing our jewellery,” says founder Tara Maria Famiglietti.

Shifting styles to maintain aspirational relevance with younger consumers could open up jewellers to a new customer base, believes David Kellie, chief executive of the Natural Diamond Council. “What Virgil Abloh was doing with jewellery was really exciting,” he says, referring to the late men’s fashion designer, whose Office Supplies collaboration with jeweller Jacob & Co produced gem-encrusted paper clips designed to be worn with trainers, denim and T-shirts. “We see streetwear as the next big opportunity for diamonds,” he explains.

Publisher Ian Thorley sees potential in luxury jewellery joining up with mainstream fashion. Last year, he launched Something About Rocks, a magazine dedicated to jewellery but presenting it through a fashion lens, with celebrity interviews, fashion shoots and a tone of voice that speaks to Gen-Z and millennial consumers.

Fashion houses competing at the top end of the jewellery market include Hermès, Gucci, Louis Vuitton, Chanel and Dior. The State of Fashion 2022 report by McKinsey reports that the branded fine jewellery segment is expected to grow by 8-12 per cent between 2019 and 2025.

“It’s the last area of luxury that there’s real growth in for brands,” says Thorley. “Every brand wants to be involved.”

Get alerts on Fashion accessories when a new story is published 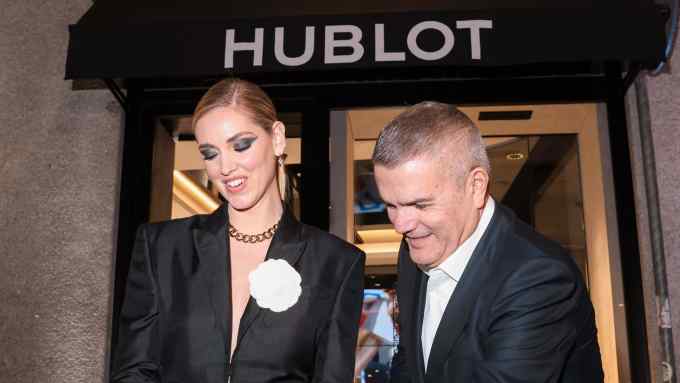