Securities and Exchange Commission chair Gary Gensler has cast a long-needed spotlight on the practice of brokers selling their retail orders to makers of markets outside of regulated, public exchanges.

Typically, these are “dark pools” — private exchanges run by large financial institutions — or “wholesalers” such as Citadel Securities and Virtu that execute orders internally.

Critics say payment for order flow, or PFOF, represents an inherent conflict of interest, sensibly observing that brokers should be routing orders where they can get the best price for their customers, not the best deal for themselves.

Supporters argue that PFOF benefits retail investors, as market makers are required to provide prices that are better than quotes displayed by regulated exchanges. They add that broker profits from PFOF allow them to offer commission-free trading.

But it is far from clear whether PFOF actually reduces costs for retail investors, or simply makes their costs less transparent. By allowing market makers to attract order flow with a lawful bribe, not a best price, PFOF gives them every incentive to hide the true price at which they are willing to trade, probably leading to poorer executions for retail traders.

Unlike market makers on public exchanges, dark pools and wholesalers are not required to publish and stand behind quotes. When they pay for an order, they have the discretion to trade against it or send it to an exchange.

While exchange market makers must improve a published price by a penny, there is no such requirement for dark pools and wholesalers, which can and do “improve” price by tiny fractions of a cent.

Thus, PFOF affords them the luxury of not having to compete on price to draw order flow, and to step in front of those who do, with minimal price improvement.

This reduces competition, but also creates disincentives for others to publicly expose their trading interest, knowing dark pools and wholesalers can so easily — and cheaply — jump ahead of them.

The relationship of PFOF to pricing quality was vividly illustrated in a recent enforcement settlement brought by the SEC against Robinhood. In that case, Robinhood explicitly agreed to accept less price improvement for its customers in return for a higher PFOF. The inferior executions given to those Robinhood customers may well have exceeded any benefit from not paying a commission.

Long ago, the UK’s Financial Services Authority wisely recognised the harm of PFOF to market quality and integrity, in effect banning it in 2012. A study conducted by the CFA Institute of UK markets found that absent PFOF, markets were more liquid and pricing improved for retail investors.

The reason is simple: when market makers have to compete on the quality of their public quotes and are rewarded with trades at those quotes, they compete more aggressively. Incentives are aligned. 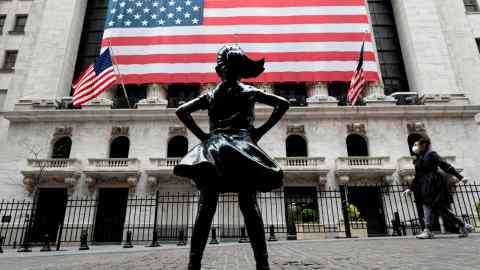 Ironically, Bernard Madoff of Ponzi scheme fame, pioneered the use of PFOF in the 1980s, arguing to the SEC that it would increase competition for exchanges, then dominated by the NYSE. Exchange market share has indeed shrunk to barely half, but concentrations have accumulated off-exchange.

Wholesalers now account for 38 per cent of US trading volumes, mostly dominated by seven firms. Market share for retail orders is even more concentrated, with Citadel accounting for 47 per cent. This market dominance brings tremendous advantages for Citadel, including a privileged first look at retail order flow — a force that increasingly moves share prices, as we have seen recently with GameStop and other meme stocks.

Gensler has said a number of market structure reforms are on the table, including banning PFOF. That may be difficult, as many “free” brokers might start charging commissions again to make up for lost revenue. This would be unpopular with retail investors who also vote and make political donations. However, the return of commissions is not a foregone conclusion. Brokers such as Fidelity are able to offer commission-free trades without resorting to PFOF.

PFOF serves as another reminder to all regulators to scrutinise schemes purportedly benefiting the little guy. History is replete with them. Madoff will be forever remembered for his multibillion-dollar Ponzi scheme, but his more impactful legacy may be the damage to investors from PFOF. Let’s hope the SEC can find a way to make things right.

This article has been revised since original publication to make clearer that the inducement that PFOF entails is lawful. The article also has been amended to include an entity’s full name, Citadel Securities.