With five finalists in the Loewe Foundation craft prize shortlist, South Korea is producing a new wave of makers

K-pop. K-beauty. K-drama. The so-called Korean Wave of entertainment exports continues apace, with Oscar wins and boy-band hits buoying not only the country’s cultural scene, but also its rapid economic growth. When K-pop phenomenon BTS topped the US singles chart in September, South Korea’s Ministry of Culture, Sports and Tourism projected that the single track would generate $1.43bn of economic activity.

In quieter (less Gangnam) style, the country’s contemporary artists have been steadily growing their global presence since the 1990s – video-art pioneer Nam June Paik having “sowed the seeds of growth for the Korean art scene”, writes curator Sunjung Kim in Phaidon’s new book Korean Art from 1953. Quieter still has been the international march of Korean craft makers, displaying a rich traditional side of a country best known for its tech innovation. The Korea Craft & Design Foundation has exhibited at London craft fair Collect for the past eight years, and the country’s makers were well represented this year, when Seoul venues such as Lloyd Choi Gallery, Gallery Sklo and Gallery SP brought the work of home-grown ceramicists, glass artists and printmakers to Somerset House.

“The craft scene in Korea is widely considered to be unrivalled,” says Loewe creative director Jonathan Anderson, who launched the Loewe Foundation Craft Prize in 2016. Of this year’s selection of 30 finalists, five are based in South Korea. “I think the renewed interest in artists playing with traditional techniques, which Korea is so deeply rooted in, has put the country front and foremost in this moment.” 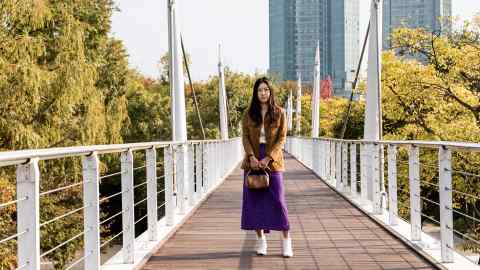 The honouring of tradition while simultaneously embracing innovation is what makes the work of these five creatives stand out for Anderson. “I’m also fascinated by how makers today are able to master multiple techniques, something that was rarely seen in the past,” he adds. “You can see this in the work of Sukkeun Kang, who demonstrates both wood carving and lacquering in his refined wooden bowl, carved directly from the single ring of a tree trunk to a 3mm shell.”

Sukkeun refers to his process as “the lacquer heat curing method”, which has been used in Korea for over 1,000 years for practical applications such as waterproofing and insect repellent on armour and helmets. This practicality is what first appealed to Sukkeun. “Ten years ago, my wife hurt her wrist and stopped using heavy dishes. I started this work to make a light bowl for her,” he says of his creations that can be washed in detergent and even popped in the microwave. His Loewe piece is also very beautiful, its delicately organic and asymmetrical form offset with a subtle lustre.

“My artistic sensibility is based on natural laws – knowledge of the role of moisture in trees, the shape of tree rings, the direction of warping, changes in shape given by knots,” says Sukkeun, who grew up in the Taebaek mountains of Gangwon Province in eastern South Korea. “When I moved to Ulsan, Korea’s representative industrial city, nature became a nostalgic influence in my work. Thinking about Ginkgo biloba leaves in autumn rain, cherry blossoms blowing in the spring breeze…”

Of the other Loewe Prize designers, Sungyoul Park uses Korean ottchil lacquer in a less poetic but more innovative fashion; instead of a finishing varnish, it becomes the primary material in textured, straw-like forms that play with tradition. Metalsmith and jeweller Sungho Cho is also forging a new technique, combining casting and hammering to produce textured silver vessels whose “ultra-thin, ultra-light walls break with the conventional notions of the material”. Meanwhile, Kyeok Kim takes craft further into the realm of sculpture. While her work has combined elements such as vintage chairs, wax and polyurethane, her Loewe entry is made with crochet. In place of yarn, she uses copper wire, creating a pretty web-like form that stretches between walls and is finished in gold leaf – “each strand overlapping, becoming entangled and distorted, disappearing like memories”.

No display of Korean craft would be complete without a nod to ceramics. The country’s earliest earthenware dates to around 8,000BC, but it is the moon jar – an elegantly curved vessel used for centuries to store rice and alcohol – that is perhaps most emblematic. At the current Frieze Masters exhibition by London gallerists Lyndsey Ingram and Tristan Hoare, the moon jars of 85-year-old ceramicist Kim Yikung are being showcased alongside the work of modern American artists such as Ellsworth Kelly and Donald Judd. The form has been notably revisited in recent years by contemporary artist Park Young-sook (a version sold for $125,000 at Phillips New York in 2017), as well as Loewe finalist Hyejeong Kim, who describes her pots as “serene, earthy and sensuous”. In cool greys, greens and creams, they exude a simplicity and calmness, punctuated with asymmetric elements. “The Carpel series, which I started in 2010, is formed on a wheel, then deformed or maimed in some way,” she says. “As I was born with a congenital venous malformation, embodying life has been a quest for me. Mastering the craft of pottery was a part of the journey.”

Hyejeong’s journey is now taking her further afield. As well as showing regularly in Seoul and Tokyo, she is represented by gallerist Joanna Bird in London – where earlier in her career she was an apprentice to potters Rupert Spira and Edmund de Waal. Next up is Paris, where an exhibition of the Loewe Foundation Craft Prize finalists will open at the Musée des Arts Décoratifs on 18 May 2021. It will be a year later than planned, but the Korean craft wave is still rolling.