Will ‘copycat economics’ in emerging markets have to end?

The writer is head of emerging markets economics at Citi

There is a copycat tendency or, put more politely, a “demonstration effect”: the policy choices of governments in developed countries create a menu of options from which governments in emerging economies make choices.

That fact makes for an uncomfortable prognosis these days. Developed countries are loosening policy to an extent that, if echoed by emerging economies, could end badly for some.

For most of the past few decades, the tendency among EM policymakers to take ideas from advanced economies has been remarkably helpful. One example of this is the history of trade liberalisation. In the 1960s and 1970s, the US and western European countries were busy cutting tariffs and reducing non-tariff barriers to trade. Seeing the fruits of this, developing countries followed suit in the 1980s and 1990s to boost growth rates. Another example is inflation targeting, which has now been adopted by a succession of emerging economies.

International economic integration and declining inflation have been generally good news for emerging economies. But it’s not so obvious emerging economies can follow all the latest fashions with equal success.

What characterises policymaking in advanced economies these days is, on the one hand, a bias towards apparently unrestrained fiscal expansion; and, on the other, central banks that are cooperatively keeping the cost of that debt down through bond purchases.

This subordination of the central bank to the finance ministry has a name: “fiscal dominance”. It was a common enough feature of policymaking in the decades after the second world war, but gradually lost its appeal when inflation started to make itself visible in the 1970s, which led to an era of “monetary dominance” as central banks were handed more and more authority to control inflation.

Now we’re back in a low-inflation world, fiscal policy has the upper hand and central banks are accommodative. This arrangement seems to work fine in rich countries, where investors are still happy to hold government debt even though there’s so much more of it yielding diminishing returns.

The reason these countries can get away with this is they have something that emerging economies generally lack, namely monetary credibility. And that’s painful for countries such as Brazil and South Africa.

These two have exceptionally high public debt burdens: Citi estimates Brazil’s is nearly 95 per cent of gross domestic product, and South Africa’s is 75 per cent. Debt burdens this big are particularly worrying because in each of these countries the long-term inflation-adjusted interest rate is considerably higher than the rate at which these economies are likely to grow in the foreseeable future. That gap between the real interest rate and the real growth rate will cause problems over time. 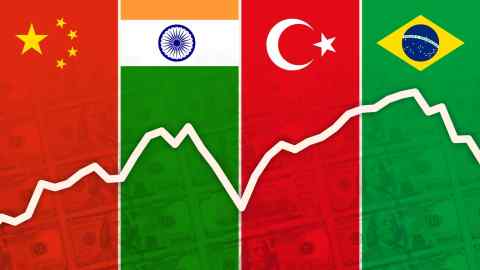 So why can’t Brazil or South Africa just implement copycat economics and get their central banks to buy bonds, reduce the long-term interest rate to tolerable levels, and keep on spending?

The reason is that, because these countries’ lack of growth potential inhibits the credibility of their money, investors want compensation for the risk of owning Brazilian or South African debt. If yields get pushed down too low through intervention by central banks, investors will begin to feel unrewarded, and the result will be capital outflows and endlessly weakening currencies. In the end, the only response to this might have to be stopping money leaving the country by imposing capital controls.

There’s no easy way around this: copycat economics seems to have found its limit. Or has it?

Last month India’s government, already sitting on a debt stock worth some 90 per cent of GDP, announced its intention to run large budget deficits for years, while the Reserve Bank of India has launched a bond-buying effort designed to put a ceiling on Indian bond yields at 6 per cent in nominal terms.

So far the market’s reaction has been forgiving. India’s monetary credibility is intact, for now, largely thanks to the market’s confidence that the country can grow fast in the future.

Good luck to India, and to Brazil and South Africa should they follow. For investors looking at EMs, finding places where copycat economics still works may become a valuable skill.