Sitting by a window in a quiet corner of Geneva’s Ritz-Carlton hotel, sunlight pouring in on their smiling faces, MB&F’s Maximilian Büsser and Bulgari’s Fabrizio Buonamassa Stigliani seem relieved that — at last — they can talk about what they have been working on for the past two years.

When the founder of boutique Swiss watchmaker MB&F originally met the creative director of Italian jewellery house Bulgari at the 2017 Dubai Watch Week fair, it was, as Büsser says, “love at first sight”. Two years later, they agreed to work on a project together.

And today — just as the fifth edition of the biannual Middle Eastern watch show gets under way — the pair have announced the Legacy Machine FlyingT Allegra: a domed wristwatch covered in precious stones.

While tie-ups between watchmakers and jewellery houses are not unheard of, the collaboration of a niche independent such as MB&F with a global luxury powerhouse is highly unusual — and likely to send ripples to some corners of the watch industry.

As businesses, MB&F and Bulgari could not be more different. Büsser says the company he founded in 2005 produced 215 watches and turned over SFr15m ($16.2m) last year. Bulgari does not publicly disclose its annual figures but, according to Morgan Stanley’s most recent annual watch industry report, published last March, the Italian company sold an estimated 44,000 watches in 2020, with turnover of SFr261m.

Bulgari’s owner, the giant French luxury conglomerate LVMH, reported revenues of €3.4bn in 2020 for its entire watches and jewellery division (which includes other Swiss watchmakers, such as Tag Heuer and Hublot).

Both men appear conscious of the unlikely association. “A multibillion-dollar company speaks to a midget?” asks Büsser, his pitch rising. “This is monumental, because it never happens.”

In total, there will be 40 watches, 20 in red gold and 20 in white gold. MB&F took responsibility for the watchmaking, with Bulgari doing the same for the jewellery. Both companies will take 10 of each model to sell to their clients. Büsser says the equal split reflects a similar investment arrangement between the two companies, adding that a collaboration “should never be a [purely] business decision because then the product will be skewed”.

But, according to Bulgari’s chief executive Jean-Christophe Babin, this is not a one-way street, even if the sale of 20 watches — each costing $185,000 — will make a far greater impression on MB&F’s bottom line. For him, the benefit will be reinforcing Bulgari’s status as a fine watchmaking company.

The watch is based on MB&F’s 2019 critical hit, the Legacy Machine FlyingT, designed by Büsser for his wife (“T” is for “Tiffany”, his wife’s name, as well as for “tourbillon”). Buonamassa Stigliani was then given free rein to redesign what was MB&F’s first model for women. The echo of the original — with its bulbous form and dizzying vertical flying tourbillon — is still very much there, but it now has a bespoke case and what Buonamassa Stigliani calls a “chaotic mix-and-match of precious stones in different shapes” set into the case and dial, in the spirit of Bulgari’s Allegra jewellery collection.

Büsser, despite being a self-confessed “dictator”, has past form in releasing his inventive, highly esoteric watch designs into the hands of fellow industry creatives. The “&F” in the brand name stands for “and friends”.

At first, that meant working with watchmakers and movement engineers to bring his creative vision to life. But, in 2009, he set a precedent for himself by volunteering his HM2 design to industry veteran Alain Silberstein. More recently, he worked with renowned hand-engraver Eddy Jaquet and Chinese sculptor Xia Hang, but he also partnered with fellow independent Swiss watchmaker H Moser & Cie earlier in the year.

“There’s some sort of masochism in it, seeing my pieces modified in a way I’d never do it,” says the 54-year-old Swiss. “When I do a collab, I have to let go. It’s a dictatorship detox.”

Although Büsser is no stranger to partnerships, the coming together of two of the industry’s most prolific creative forces marks new territory for both men considering the difference between the two companies.

On the Bulgari side, Buonamassa Stigliani is often described as the natural successor to Gerald Genta, the Swiss artist and watch designer who defined 20th century luxury watchmaking with designs such as the Royal Oak and the Nautilus, commissions for Audemars Piguet and Patek Philippe respectively. The Italian’s Bulgari Octo and Serpenti watches are also widely considered to be modern-day icons. Earlier this month, a version of the Octo Finissimo won the top prize at the prestigious Grand Prix d’Horlogerie de Genève, usually referred to as the Oscars of the watch world.

“It was a great pleasure for me,” says the 50-year-old of the collaboration with MB&F. “The biggest frustration as a watch designer when you play with a jewellery brand is that you cannot explain or show the power of these [precious] stones in a watch, because the dial and the glass are so close together.” The original FlyingT’s snow globe-like dome offered more space than you would find in a regular wristwatch.

Both red and white-gold models are covered in more than three carats of diamonds, but the standout decorations are the five enormous coloured stones set on to the dial — tsavorites, amethysts, tanzanites and tourmalines appear on both, with the red gold carrying a rubellite and the white gold version a topaz.

From above, the Legacy Machine FlyingT Allegra’s towering flying tourbillon looks like a mechanical fish in a tropical tank. From the side, it looks more like the flying car from The Jetsons. Büsser describes it as a “flying saucer” and considering some of his past creations have been inspired by forms as diverse as a frog and a Can-Am racecar, this appears to be a compliment to Stigliani’s design.

Nevertheless, the process was clearly painful for him. “I am 100 per cent a symmetrical guy,” says Büsser. “So this was gut-wrenching. It’s not my language, but that’s why it’s interesting. My wife buys me things I wouldn’t buy for myself and her gifts take me somewhere I wouldn’t otherwise go. That’s basically what we’re doing here.”

When asked about the possibility of further collaborations, Büsser simply says the Legacy Machine FlyingT Allegra is “like a concept car”. Instead, the two creative directors are content to marvel at what they have created together — “our baby”, as Buonamassa Stigliani refers to it. “Fabrizio took the FlyingT,” says Büsser pointing to a drawing dated 15 June 2020, “and honestly, in 27 seconds, designed what you see here.” 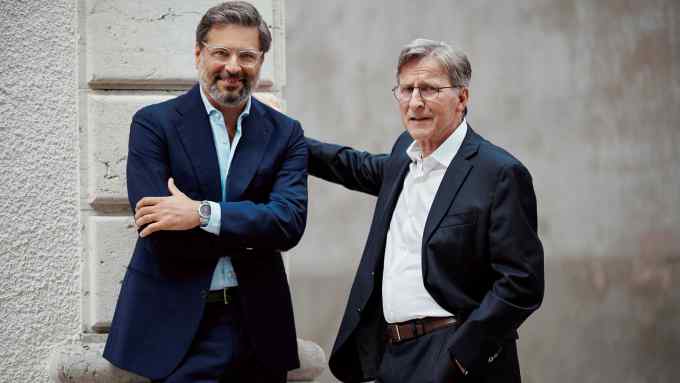