‘At war with the whole world’: why Putin might be planning a long conflict in Ukraine

Despite Russia’s failure to break down Ukraine’s defences, heavy casualties and a series of military defeats, the Kremlin has kept up a refrain: the goals of Vladimir Putin’s invasion will be reached in full.

Russia’s territorial targets have appeared to shift depending on the short-term gains Putin feels his troops can achieve on the battlefield. He scaled back an initial plan to seize central areas including the capital, Kyiv, in favour of a new assault focused on the eastern Donbas region.

But Russia’s goals, which the Russian president has made clear include ending Ukrainian statehood, remain unchanged, according to people involved in efforts to broker a peace deal between Moscow and Kyiv.

This means, they assessed, that he is prepared for a protracted conflict going much further than the recently outlined target of “liberating” the Donbas. Putin wants to capture all of south-eastern Ukraine to cut the country off from the Black Sea and create a platform for further attacks, they say.

“He’s a tactician . . . a judoka . . . He wants to feint and throw you over his shoulder,” one of the people said, referring to Putin’s love of judo. “He’s not reasonable, he has a distorted picture of the world in his head [ . . .] and the scenarios have changed. Appetite comes during the meal.”

An influential Moscow-based tycoon said the conflict would go on as long as it took for Putin to sell it as a success domestically. “If you can’t make it look like a victory to the electorate, you can’t save face,” the businessman said.

Russia appears to have learned from some of its military mistakes in the early days of its invasion of Ukraine on February 24. This led to a redeployment of its forces to the Donbas and the appointment of a single field commander.

But Putin’s view of the situation on the ground appears distorted by inaccurate field briefings and state television reports, the people involved in the talks say.

Events are not reported up the chain accurately, said Pavel Luzin, an independent military analyst. This in turn is likely going to hamper Russia’s offensive and force it to pause operations at some point in the next month.

“It’s a huge hierarchy, and when some low-ranking analyst . . . writes a report about what’s really happening, it goes through 10 bosses and when it comes out at the top, it says everything is going great. That’s how the system works,” Luzin said.

Video: How London became the dirty money capital of the world

Assessing that Russia needed to regroup, Ukrainian officials initially thought Putin would look for a way to declare victory by May 9, when he celebrates the Soviet Union’s victory in the second world war with a military parade on Moscow’s Red Square.

But with few military gains secured so far and peace talks faltering, there are signs the Kremlin is preparing for a protracted conflict that it sees as a proxy war with the west. Putin said this month that “the most important thing [happening today]” was not the “tragic events” in Ukraine, but “breaking the unipolar world system that was created after the collapse of the Soviet Union”.

Rhetoric on state television has changed accordingly. With few triumphs to boast of beyond the capture of the port city of Mariupol — which required all but destroying it — presenters have blamed the lack of progress on the west’s support for Ukraine.

Some of them frequently muse about using nuclear weapons against the west, trumpeting Russia’s recent test of a new intercontinental ballistic missile, the Sarmat, and quoting a 2018 comment by Putin in which he joked about destroying the world in a nuclear holocaust because “what is a world without Russia good for?”

To gain ground on the front lines, Russia needs a significant manpower boost to protect its higher-value equipment. This can only be done through retaining conscripts, calling up reserves or mobilising volunteers — all of which require the Kremlin to admit it is waging a full-on war, rather than a “special operation”, according to Jack Watling, a senior fellow for land warfare at the Royal United Services Institute think-tank.

Rather than signalling a push to end the war, the Donbas offensive may also be the prelude to broadening the conflict.

When Rustam Minnikayev, a top Russian general, outlined plans to seize south-eastern Ukraine last week, he also suggested an attack on neighbouring Moldova was planned, indicated Russia was preparing for a longer war of attrition against what would remain of Ukraine, and that Moscow saw the conflict as part of a greater geopolitical clash.

“All things considered, we are now at war with the whole world, like we were in the Great Patriotic War, [when] all of Europe, the whole world was against us. And it’s the same now, they never liked Russia,” Minnikayev said.

While Minnikayev’s analogy makes little sense — the US and its European allies fought the Nazis alongside the Soviet Union — it indicates a belief the Ukraine conflict is “just an episode of a greater confrontation with the west”, said Tatiana Stanovaya, founder of political analysis project R. Politik.

“Until Putin manages to seal a new Yalta” — the summit that divided Europe into US and Russian spheres of influence after the second world war — “Russia will dig in, and it won’t be limited to Ukraine,” she said.

“That doesn’t mean they’re going to conquer Moldova or the Baltics — it means they could escalate in any way through sabre-rattling, testing weapons or maybe even using them.” 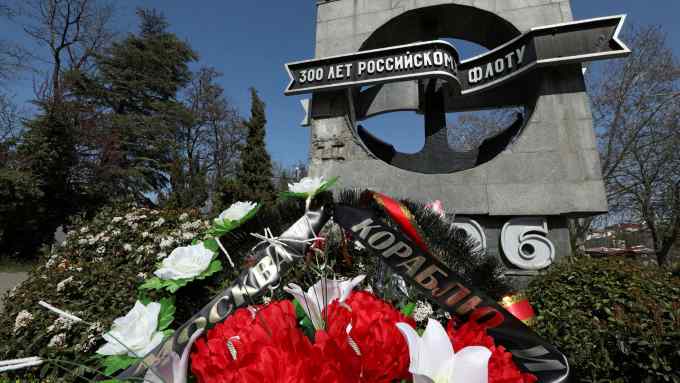