How I Spend It: Toyah Willcox on rocks, hag stones and meteorites

The musician reveals what lies behind her lifelong fascination with crystals

I collect crystals, and I’m not talking about crystals you keep in your pocket. These are museum-quality collectors’ pieces. My fascination is that these are timeless things. They have been there since the Big Bang. All around the house we have crystals, along the skirting boards, in cupboards, in the cutlery drawers. My computer sits on a piece of rose quartz that is at least 10kg in weight. It’s the size of a Bible you’d see in a church.

Meteorites are full of potential. They’re what’s put us here

I remember clearly the first stone that meant something to me. I was about seven years old. I was on a sandbank on the River Avon and picked up a pebble with a hole in it. My father said it was a “hag stone”, one with a naturally formed hole in it. I could not put it down. I was instantly in love with it, the smoothness of it, the history of it, what it’s been through, what it’s survived, that it’s outlived all of us and will outlive all of us. I’ve had this particular hag stone since I was seven – I’m now 63, and it’s been a point of conversation with virtually everyone I’ve known. A lot of musicians feel the same way about stones; we collect pebbles and send them to each other.

The second stone I felt a real connection with was a cut citrine that my mother was about to throw away. I was about 13. It fell out of the ring and she said, “Oh, it’s worth nothing.” And I just dived into the dustbin and got it. I still have that. It’s worth about £30, but it’s a citrine, which brings good fortune and wealth. I didn’t know this back then, but I had an instant bond with that stone. It had been in a ring my mother had had since childhood; it contained her whole history.

I started really collecting crystals in their natural form in 2003. I would get them from a shop on Charing Cross Road called Watkins Books, where young monks from Tibet would travel to with these amazing stones. At the time I was trying to buy a fire agate, which is very rare and thought to tune you creatively; it costs thousands of pounds so you can only get tiny pieces. I went into Watkins and they showed me all these stones this monk had brought in that week and I was just dribbling: there was moonstone, aquamarine, amethyst, all in their natural state; it was just mind-boggling. That was it. I was sold. I’ve been a collector ever since.

It’s important to me to know the provenance of my pieces. The meteorites mainly come from the Arizona desert. Phenomenally – I have no idea why – meteorites tend to fall in unpopulated places. I have a crystal from a meteorite that landed north-east of Vladivostok in Russia on 12 February 1947. Another one was found in north Africa, picked up by Berber Arabs and sold on. It’s a chondrite stony meteorite, so it’s a light colour, which is very unusual. Chondrite is one of the oldest materials in the solar system, thought to be about 4.6 billion years old. It contains some of the nearly 100 different naturally occurring elements, including those that are quite rare on Earth, such as iridium and niobium.

HTSIHTSI autumn travel special
How I Spend It: Susan Sarandon on the family trip – ‘I did mushrooms with my son once...’ 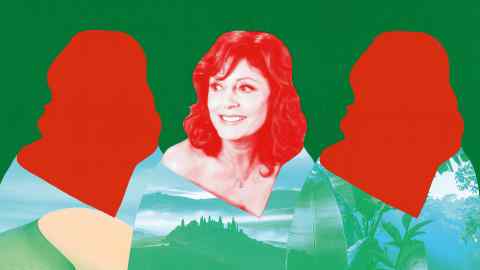 I find meteors astonishing. Where I live, which is near Worcestershire, I see shooting stars. About 17 years ago I just happened to look out the window at 11pm and saw this really huge burning orb. I could almost see the flames on it coming through the sky. I thought, “Bloody hell, that’s going to wipe us out.” They are a proof that out there is this vast expanse and, for me, at my age, it’s not nothingness. It’s something that is incredibly connected. So these meteorites are full of potential. They’re what’s put us here. They’re what created the moon. They’ve created our universe. They’ve created us. I find that wildly exciting.