Roll up, roll up: the father-and-son duo championing the work of Afghan weavers

Artist Sir Christopher Le Brun and his son, Edmund, have created painterly rugs that highlight the skills of local artisans

Edmund Le Brun and his wife Flore were on honeymoon on the Greek island of Paros the day Kabul fell to the Taliban. “We had been watching the major cities falling throughout Afghanistan where we have both worked and lived,” explains 31-year-old Le Brun, a tall, adventurous Englishman, “so it had been in the background throughout our trip. But when Kabul fell, the panic set in. You can imagine the cognitive dissonance of trying still to eke out some of the happiness of a honeymoon – sunsets, glasses of white wine, sitting at the beach – while trying to do what we could to help our friends and partners get onto an evacuation list.”

The couple had their own cargo sitting on the tarmac at Kabul airport – a shipment of rugs designed by Edmund’s father, the celebrated artist Christopher Le Brun. His irregular, colourful, organic forms are handmade into exquisite pieces by Afghan weavers, many of them women working at home. Each piece represents a long tradition of craftsmanship, and a skill that is recognised as one of the few professions women are still allowed by the Taliban.

“These rugs have had quite an adventure,” says Edmund, standing in his father’s studio in Camberwell where two rugs are laid out on the wooden floor; a further five have since made it out of the country. “This is a story of all sorts of things – of love and loss and creativity, and the livelihoods of these people who are so talented and in such a desperate situation. We want to tell the story about how Afghanistan is amazing and has all these beautiful things to offer, and by telling our story we hope to make people stay engaged.”

Edmund’s relationship with Afghanistan has been evolving since 2013. He and Flore met while working in Kabul, where Edmund was helping to set up businesses, schools, clinics and artisanal spaces inside the restored buildings of the Old City. The experience left them with a profound appreciation of the craft history of the region – one that led to the creation of Ishkar, a London-based retail business focused on showcasing artisanal wares from conflict-torn and politically tumultuous regions, when they returned to London in 2015. As well as arranging trips to countries such as Afghanistan, Yemen and Iraq, the couple started importing a range of homewares including jewel-coloured handblown glassware from Herat, jewellery from Kabul, Amman and Yangon and exquisite woven rugs made from Ghazni wool by a community of weavers in north-west Afghanistan. “We wanted to create economic opportunities [for these craftsmen] and show that these countries are able to produce world-class luxury goods,” he says.

It seemed a natural progression for Edmund to produce rugs featuring his father’s artwork. “Edmund and I had been talking about doing something together for a while,” explains Christopher. A painter, printmaker and sculptor, he presided over the RA from 2011 to 2019 and served as a trustee of British art institutions including the National Gallery, Dulwich Picture Gallery, the National Portrait Gallery and the Tate.

“My father was always very supportive of my living in places that are not what would ordinarily seem safe,” says Edmund. “He and my mother [the artist Charlotte Verity] had a feeling for Afghanistan because they had been to visit me. And when he saw the potential in us creating rugs together, it was very easy for us to slot into a professional relationship. He has a feeling for colour and I understand the carpet-making, so we each speak with a lot of confidence and authority about our own parts.”

Christopher knew that his designs would translate well. “When I am collaborating with a print workshop, the design comes back changed in an interesting way,” he says. It’s the same with the weavers, who work with his simplified organic abstract forms and a limited natural palette. “It has become a genuine collaboration,” he continues, “and a wonderful surprise.”

Two weavers take up to six months to produce one of the rugs. The technique of cutting and washing the Ghazni wool carpets gives them their silky sheen, which is unique to Afghanistan. In order to vouchsafe the ethics of the manufacture, they work with a charity called Label Step, an ethical verification non-profit committed to the wellbeing of weavers and workers in the handmade carpet industry. “This is a serious business enterprise for us,” says Christopher. “We aren’t a charity. We want to show the skills of the women of Afghanistan – producing these beautiful rugs and keeping people aware of their extraordinary expertise is good for all of us.” 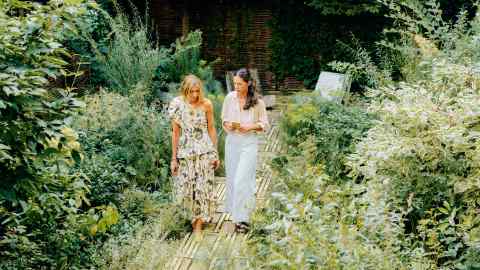 The rugs, produced made-to-order as editions of five, will now form part of a show in the studio on 26-27 March. “Prices will start from around £4,500, depending on the size,” says Edmund. Meanwhile, he and Flore face the challenge of making sure the weavers get paid: currently, Afghan accounts are frozen. Their anxiety for the country is palpable, but Edmund still has great hopes for his fragile new collective. “As long as we can find a safe and viable way of doing so, we are determined to keep working with Afghanistan.”

Get alerts on House & Home when a new story is published