My personal style signifier is wearing all white by day and all black at night. I’m quite simple: I like white socks, a white T-shirt, white trousers. And at night, I’m often in black vintage 1990s Prada: I particularly love my leather A-form trenchcoat, and some knee-high boots that I’ve worn to infinity and are falling apart. I’ve been travelling so many years that everything has to work, and last forever. Anything I buy, I like to think, “I’ll wear this when I’m 70 and I’ll be so chic.”

The last thing I bought and loved was a selection of vintage coffee-table books on Louise Bourgeois, Cindy Sherman and Marlene Dumas. I love Cindy Sherman because she speaks to something I battle with a lot: how does one age as a woman without becoming insane? I’m inspired by all women who are able to be free and powerful and not vain.

The place that means a lot to me is Stockholm. As I’ve lived in LA for so many years, I treasure my hometown. I close my eyes and I can smell the spring-summer air there. The light, the coffee, the buzz… Stockholm, for me, is like taking acid.

The best souvenir I’ve brought home is a blue-and-white handpainted teapot that I bought in Japan. But I recently broke the lid, and I don’t seem to be able to fix it. It’s heartbreaking, but I guess it’s a symbol of the past. You just have to move on.

The best book I’ve read in the past year is Motherhood by Sheila Heti. All her hesitations about having a baby felt absolutely true to me – I have a son, Dion, who’s six. It doesn’t matter if you have kids or not, you still have to answer these questions and relate to motherhood in some way.

My style icon is not so much about an individual, it’s about seeing someone on the street wearing a perfect T-shirt, or an older gentleman with the ideal cashmere blazer with a signet ring. Obviously, there’s Phoebe Philo, and Joan Didion, and I was watching Agnès Varda’s documentary on Jane Birkin recently, and I thought, “Damn, she can wear a pair of jeans like no one else.” But then I quite like how Kanye West dresses too. Basically, I’m all about the right fit and tone.

The best gift I’ve given recently was a vintage Eames writing chair, to someone I love very much. It’s 1980s and upholstered in green leather. I bought it for him because he’s a writer, and I wanted him to think of me every time he was writing. No, I’m joking… I just think that when you’re writing at a desk, you need an iconic chair.

And the best gift I’ve received is being able to love again. Someone said to me recently, “It’s amazing how you’re still able to be in love after everything after you’ve been through” – because when you’re crushed, you think you’ll never find love again, and then you do, which is so beautiful. Does this have anything to do with the Eames chair? No comment…

I have a collection of classic furniture pieces. The first one I bought was after a big separation: it was a pink marble Gae Aulenti coffee table. I don’t have too many things – whenever I’m buying clothes or jewellery, I’m looking for complete symmetry, harmony, but that doesn’t come along that often. I’ve decided I don’t want the inbetween thing in life. Either I’ll sit on the floor, or I want my de Sede Terrazza sofa. I want perfection – and I can’t afford it!

The best bit of advice I ever received was: the only way out is in. I’d heard it here and there, but it only really clicked when I started meditating, which David Lynch taught me to do – he sent me to a friend of his about a decade ago.

My favourite building is my home. I wake up every morning here and think, “How did I get so lucky?” I put out a call to the universe. I said, “I want a midcentury home that no one has messed up, that’s small, one-level, with a garden, a view, a fireplace and a bathtub and one extra guest room,” and somehow it appeared years later. And the view is so good: that classic LA city lights thing, like in the movie Heat.

How does one age as a woman and not become insane?

In my fridge you’ll always find Honey Mama’s chocolate: it’s just organic cocoa and honey and other raw ingredients. Then some tahini. And lemons, because I’m that annoying person who actually enjoys having lemon water first thing in the morning. But it’s not like I’ll wait long for breakfast after: I’ll immediately eat loads of bread and cheese. honeymamas.com

The last item of clothing I added to my wardrobe was white tennis socks from Nike. I’m obsessed – I buy so many pairs. I guess it makes me feel like I went to college – and I didn’t. The Racket Doctor, 3214 Glendale Blvd, Los Angeles, racketdoctor.com

An object I would never part with is my Contax T3 camera. I make a book of photographs for Dion every year – it makes it look like he’s had an incredible childhood! My mum, who died a few years ago, was a photographer, and she shot us as kids a lot, too. It’s just such a beautiful thing to have.

The beauty staple I’m never without is Weleda Skin Food – I need that with me all the time. And I love perfume: I have Frédéric Malle’s Musc Ravageur; a scent by Swedish brand Stora Skuggan called Mistpouffer; and one made with botanics from Patagonia called Ett Hem, by Fueguia 1833. They’re all quite musky – smoky and intense. I always apply Olio e Osso lip balm, then put a Mac Spice lip liner on after – you’ve gotta keep up with the kids, you know?

The thing I couldn’t do without is Nuun electrolytes. I’ve always had extremely low blood pressure, to the extent that my doctors always say, “How are you even alive?” But someone told me to add salts to my diet, and now I drink them all the time. I do feel like I have quite a lot of needs, though. I need a matcha daily, and I drink coffee alternative MUD\WTR too. All the things you think LA people do, I do that. Basically, I’ve become my own worst nightmare.

The last music I streamed was “The Big Ship” by Brian Eno. He is able to put so much life and feeling into a track. Music really is the quickest route to heaven.

My favourite room in my house is my bedroom. It has my amazing Gio Ponti bed, which I bought from an old hotel, and my books, but the best thing is the mattress. When I was pregnant, I wanted everything to be 100 per cent natural; I found a mattress by Naturepedic, which is made from organic cotton by an Amish community in Ohio. And then I also have pearlescent, very light green-coloured sheets by my friend’s bedding label, Tekla. The thing is, from my bedroom I can see into my living room, and it’s all green carpet, so it’s really one big space. I’m essentially lying down flat all the time, either in my bed or on the floor.

My wellbeing guru is my therapist, who had the most profound effect on my life. I do the Ideal Parent Figure protocol, which is about retraining your attachments. I wanted to figure out why I kept getting into these dramatic situations – and I think it’s worked. And then I also see a craniosacral therapist in Stockholm. We look at how your whole life and memories and trauma are stored in your body. It’s mindblowing – as powerful as taking ayahuasca.

I’ve recently rediscovered Marina Abramović. I went back to her work while I was working on the songs and videos for my visual album, EYEYE. I was interested in her repetitions. 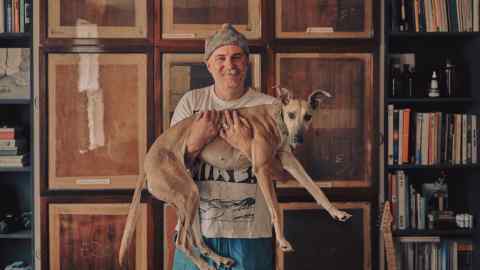 The one artist whose work I would collect if I could is Cy Twombly. I’m just saving up! His work really speaks to me – it touches me. I think art should be immediate.

The podcast I’m listening to is En Varg Söker Sin Pod. It’s a Swedish podcast where two women discuss feminism and art, and dissect popular culture from a very intelligent point of view.

An indulgence I would never forgo is food: I have never skipped a meal, ever, in my life. And massage – especially a foot massage. The best one I’ve had was in Singapore. I got it from a blind man in this strange mall I was staying in. It was really hard – on a scale of pain of one to 10, it was a 12. But somehow I was completely addicted. I went twice a day, and it was heaven.

My favourite app is Insight Timer. It’s the only one I don’t feel is a complete waste of time. Whenever I’m on my phone, I feel so guilty and bad. But Insight Timer is good. It’s not that I like to meditate – it’s just that it’s really important.

In another life, I would have been a couples therapist – my favourite topic is the complications of love. That, or a baby nurse.

The work of art that changed everything for me was “Song to the Siren” by This Mortal Coil. I’m basically hoping that one day I can do a vocal take as mesmerising as that. I don’t think I’ve succeeded, though. I’ll die trying.